My idea now was to bar all four high strings with and make put my little finger on the fifth fret (A) of the highest string. I haven't seen this voicing anywhere while A/C#, so I was wondering if there's a reason not to play it this way?

Also, do my difficulties with x42220 suggest any problem with my technique that I should be working on?

Yeesh, x42220 is indeed terrible. Don't feel bad about struggling with that.

But the downside to x42225 in this context is that it's completely parallel to the previous chord, and that can sound cheesy1. If you don't find it objectionable, then there's no reason not to go ahead and play it that way.

If you want to break up that parallel, you could always revoice the G/B chord a little bit. You wouldn't need to change it massively, just make a small change so that it's not a completely parallel slide up the neck.

1Then again, you are playing a disney song on guitar... 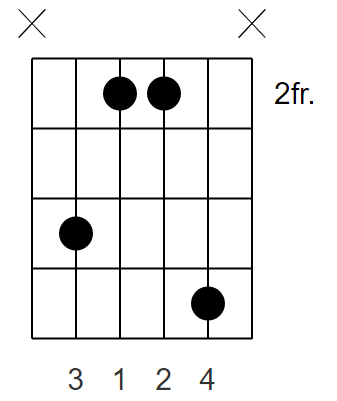 Mute the top string with your little finger rolling sideways and don't play the bottom string. Then you get the low C# and the high E, along with the A on the third string which is the root note. This alternate chord sacrifices the C# on the second string, however since the main focus is to have a C# in the bass this won't harm the chord too much.

Ideally, I would ask you to try playing it with four fingers but if you struggle to get your little finger to the 4th fret this will still work. It's not like you're playing a whole new world.

One of the moveable chord shapes from open to barred (apart from the well known/used E and A shapes) is the open G shape. It's quite easily played using the usual index finger for barre. Here, on the second fret. The other three fingers then form the rest of the open G which becomes a barred A. 542225.If you wanted, the pinky can cover top and second string giving that E an airing, or even - playing the E on 2nd string, and muting the top string - although a lot of folk like that voicing, I find it harsh. By not playing the bottom string, you'll get what you want.

If you are touching the high e with your index while barring on 2 then you can use that touch to mute it. The high e open is the melody note which could be nice if you are playing it solo on just the guitar. But based on the chord voicing before it that is not the goal here. As your fingers get stronger you will be able to play it as suggested. For now play it however feels easiest.

There's no reason not to play it like that, if it sounds right to you and you can play comfortably. My favourite A/C# is x42225, or x4222x. Fingers used: x-3-1-1-1-4, i.e. barre the "222" with the index finger. Very easy and comfortable to play, if you tilt/twist your wrist the right way, so that you do the barre with the side of your index finger.

Play it however you want. Once you get comfortable with common voicings look at the guitar as if it was a piano, find all the notes of a chord, and go to town trying random combinations. Trying different voicings is beneficial making you focus more on the music (what you're playing) than the technique (how you're playing it), and lets you focus on the melody that the high notes of the chords make up independently than how you fill in the other notes.

Eventually you'll end up playing songs with different voicings just for the hell of it, start noticing that you prefer a certain voicing in the context of a particular chord progression, or just feel like messing with different finger combinations. Or maybe, simply, the chord is easier to play with a less-used voicing that sounds well, just the same. It simply isn't included in the list of "common chords".

I just wanted to add an answer that focuses more on the music than the technique. That said if you wanna move up the neck a bit x4765x sounds pretty good.

A different approach would be x4x220. You can mute the 4th string easily using the finger that goes in the 4th frame.

29
"one finger per fret" - is it worth following this rule?
10
Should I mute "unwanted" strings or not when playing power chords?
41
How not to touch neighbouring strings?
0
Finding a balance point learning to pick a guitar at a right angle?
4
Is there a way to do a tone knob like effect with an acoustic without audio effects?
3
What's the proper technique for fretting chords on a guitar to prevent hand cramps?
6
How do I get a nice attack while fingerpicking?
5
Is fingers pointing towards each other a problem when fretting a guitar
0
How to barre this chord without muting adjacent string?