How to deal with chord vii of a key?

I'm pretty new to music theory. I always find the last chord of a key, the seventh chord, not sounding very pleasing and I have a hard time seeing how it can be used. So it's a pretty open question I guess.

I ask because I'm sure experienced musicians have already dealt with this. I mostly deal with it by not using it! But it's there for a reason I'm sure. In key of major C it would be the chord B diminished, B minor seventh flat five (B°, Bm7b5)

As already noted, in a major key, the chord on the seventh step is actually diminished, not minor. However, it has several nice uses. The root position is probably the least common; it does occur in sequences like I-IV-vii0-iii-vi-ii-V-I (a cycle of fifths or fourths depending on the author of the text).

The first inversion, notes 2-4-7 in that order, is very common. This chord occurs in even rather strict counterpoint dating back to the medieval period. Note that the intervals over the bass note (not the root) are both consonant.

A third use is as a V7 chord without the root. Some authors treat this as the main usage.

In functional harmony, this chord acts like a dominant but not so strongly as the V or V7 chord. It makes a useful change of color.

The chord on the seventh scale degree (which, by the way, you've mislabelled--the "B diminished" chord you've mentioned is vii°, not vii, and the "minor seventh flat five" chord is viiø7, not vii) is used in much the same way as the dominant chord. The diminished seventh chord (vii°7) is also used in the same way, even in major-key pieces that need to borrow this chord from the tonic minor key. (The diminished seventh chord is just like the "minor seventh flat five" chord except the seventh is one semitone smaller.)

The vii°, viiø7, and vii°7 chords each lend their own flavour to the music (and, IMO, they're all more strident than the dominant chords of V, V7, and V13). The vii°7 chord sounds particularly ambiguous, as several keys can share the same vii°7 chord note-wise but have different enharmonic spellings of it. (For example, C minor has the vii°7 chord of B-D-F-Ab(/G#), which uses the same notes as A minor's vii°7 chord, G#(/Ab)-B-D-F.) For that reason, the diminished seventh chord is an excellent pivot chord (a shared chord used when switching keys).

As it includes the tritone (if we're in C major that's B -F), vii° is always going to sound like an incomplete dominant 7th (G7) when used in a diatonic sequence. If used at all it will probably be as a passing chord.

It can lead us further afield though, particularly when given a 7th of its own.

viiø7, III7, VI7 etc. (in C that's Bm7b5, E7, A7) - then 'riding the cycle' back home - is common. And is more usefully considered as a chromatic excursion rather than as a series of modulations.

It's funny you should mention this chord as not sounding very pleasing, because personally, it's my favourite chord! Sometimes called the minor 7 flat 5 chord, I prefer the term "half diminished" chord, which is usually written as "ø" (easy to remember, it's the diminished symbol "o" crossed in half.). In a minor key it lands on the 2nd degree, and in the major on the 7th. It can be used in other contexts too though!

It has a number of interesting properties that make it useful in a bunch of situations, but before I go on to the technical side of things, let me first convince you of it's beauty, subjectively.

I first fell in love with this chord at around the same time I fell in love with Brazilian music, where it's often used as a sort of "heartstring puller" chord in minor keys, creating a sentimental mood (and usually used to set up a dominant 7th chord giving a tension and release effect). You also hear this used a lot in the wistful romantic string section bits of old hollywood film soundtracks.

The passages I used in the above (low quality and rambling) audio outline the canonical example: using viiø as a 2 5 1 to the relative minor. Then the second example I chose because it's just full of various half diminished chords, and shows quite nicely how soft and delicate they can sound (of course the apart from the Bø these are non-diatonic uses of the chord which isn't 100% strictly an answer to your question about the viiø/iiø, but limiting yourself to diatonic chords is no way to learn about music). 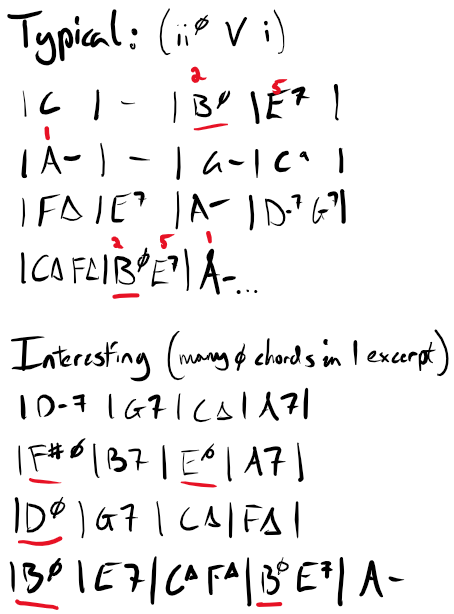 1) So the basic (almost certainly the most common) use of the half-diminished is to resolve downwards by a fifth to a dominant 7th chord, which then leads to a minor chord, aka, a minor "2 5 1", e.g. Bø E7 Am . This is what's seen in the examples I gave above.

But before I go on to the other uses, let's have a look at some of the chord's interesting properties:

Because of all these properties, as well as just a beautiful sounding way to do a minor 2 5 1, it's also a really malleable chord that it's quite easy to slip into places in a subtle way, and move the chord progression in new and interesting directions.

1B) I've not given this its own number, because it's more just an extension of 1). Because of the fact that it's so similar to a minor chord, you can take that minor 2 5 1 and daisy chain it, instead of landing on the expected minor chord, land on yet another half diminished chord and keep the cycle going. João Gilberto's recording of "A felicidade" is a good place to hear this. (F#ø>B7>Eø>A7>Dø>G7>C).

2) It can be used as a chromatic tension to a major or major 7th chord just below it. Most commonly this is seen in minor keys, where the half diminished chord on the 6th scale degree is not really an "out there" sounding chord, since the sharpened 6th is perfectly normal in a minor key (e.g. F♯ø in A minor). A really common progression is something like |Dm |Dm/C |Bm7b5|Bbmaj7| (e.g. in Portishead "Glory Box") which can really be though of as |Dm |Dm/C |Dm/B |Dm/Bb|

3) The flat 6 scale degree is the usually the most gloomy or the most "sad" interval in a minor key, and so the viø minor chord can be used to "lighten up" a minor song by injecting a bit of a "Dorian flavour" into the minor progression in a way that is less "obvious" and "in your face" than a major IV chord. For example, in many cases, in Am, a D or D7 chord might be a bit too much but a Dm or F chord a little too dreary (Am - D is a very "in your face", strident "doriany" chord progression which might not be the effect you want). In this case, an F♯ø allows you to move to a more doriany less morose feeling space in a much more subtle way. "Karma Police" by radiohead does this, the second chord in the first line is F♯ø, but then in the second line it is replaced it with F(sus2), and the second one sounds a little more "grave" and "resigned" than the first (against the same melody).

4) Its sharing of notes with the dominant chord a major 3rd below it can be exploited, either by using it as a substitution for the dominant (boring) or by using it as a pivot chord. In Elvis Costello's Almost Blue he does this; the first time round the Bø as usual goes to E7>Am, but the second time round you get Bø>G7 which leads to C, the relative major. This is a less strong resolution than Dm7>G7>C would be, but doing Am>Bø>G7>C means that you don't "see the G7 coming", it's not flagged up obviously, you just seamlessly shift into the major key from the minor.

6) the same as the above, but instead of using that substitution to create a feeling of movement in otherwise static chords, using it as a way to modulate somewhere new using its secondary dominant function. e.g. using F#ø > B7 > Em7 to modulate from A minor or C major to E minor; it's easy to slip in the F#ø since it's essentially the same chord as an Am6, and then sneakily use it to move to Em , like at the beginning of Samba de Orly by Chico Buarque

The VII degree of the major scale can be regarded as being the II degree of that scale's relative minor. The chord rooted at this tone functions as the II in II-V-I progression in that relative minor. Concretely: Bø7-E7-Am in the C tonality. This device can be borrowed out of that minor context and used in a major one. For instance, a Dm7-G7-C7 cadence, we can substitute a Dø7 for Dm7, as if we were pretending that we are temporarily in the Cm parallel minor key rather than C. This provides a colorful alternative to other choices, like a D7 (secondary dominant). That's likely a primary reason why the half-diminished chord is understood as a dominant substitute.

Another way to regard that VIIø7 chord is as a container for the tritone. For instance in the key of C, the Bø7 chord, just like the G7 dominant, contains the B - F tritone, which creates the tension that pulls toward the tonic. We can use it as substitute for that dominant: VIIø7-I instead of V7-I.

That's the point. In classical music, when the ⅶ° is used, it's because the composer wants to make a statement that this particular spot is not a cosy home at all, but evokes the stronge urge to resolve somewhere else – usually to Ⅰ, or perhaps first to Ⅴ and then to Ⅰ.

At least in my book, music is not supposed to sound “pleasing” all the time. You probably wouldn't find much excitement in reading a book where everythings great and fine and everybody's happy all the time, right? Stories need an antagonist. Likewise, exciting music thrives on the contrast between dissonance and resolution. In the Western tradition, the dissonance comes in the form of various sorts of dominants, which the ⅶ° is basically a special type of. In other musical styles it might rather be deliberately “off” melody notes like blue notes. The effect is in a sense similar: instead of only blandly plastering everything with homogenous, sugary consonance, you build up harmonic tension that will evoke an actual emotion and desire.

20
Can a chord contain both the C and C♯ notes? (as opposed to containing C and D♭ notes)
6
Diminished chord buttons on an accordion
0
Key/Chord recognition using a computer
2
How do I manage internalizing foundation for chords, scales, hamonies and voicing
3
What is the purpose of suspended chords?
5
Roman Numerals and VII#
4
Minor Key (and other key?) Roman Numeral Analysis
0
How do I know what note is #11 in my Fmaj9#11 chord