Is there a good way to denote nested repeats?

I'm arranging a song and I have a jam section in it that could be repeated an arbitrary amount of times. The problem is that the jam section itself contains repeats, so I have "nested repeats".

What I want to accomplish can be illustrated with this picture: 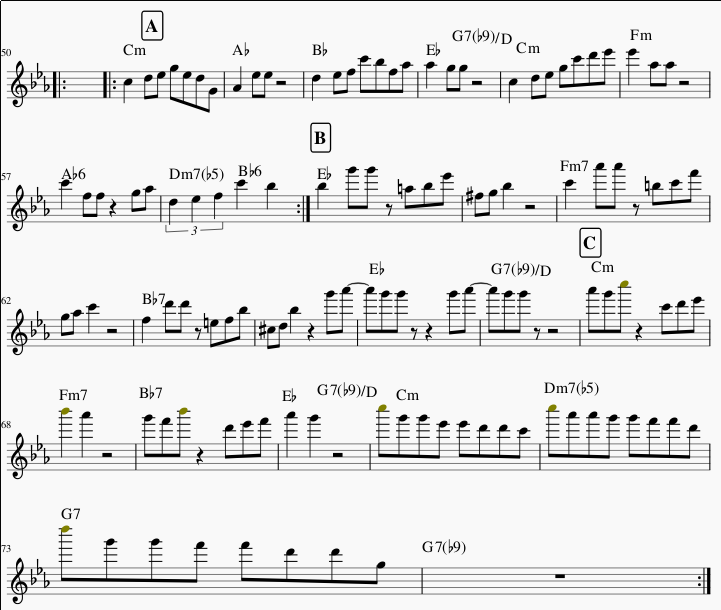 So the jam section is on the form AABC, and this whole form should be repeated until the conductor gives a cue.

There will be music both before and after this section. How do I handle nested repeats in a good way?

Repeat barlines for the short repeat, DS for the big one. Probably with some explanatory text. Or just write the 8 bars out twice.

You'll find this sort of thing (picture) too, but with even more emphasised 'wings' on the outside repeat barlines. Easy to do effectively handwritten, not so easy in a notation program. 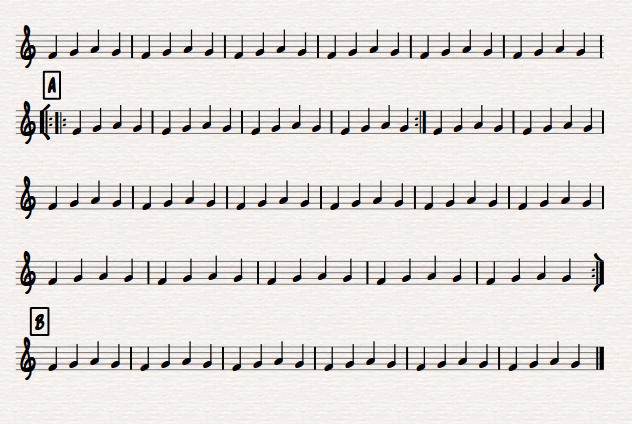 In this case, especially since your A section is only eight measures long, it's an easy enough thing to just write out the A section a second time without using repeats. (I can think of several examples from Brahms, Schumann, Chopin, and the like where the composer decided to do just that.) This then removes any confusion about where the repeat at the end of C goes to. And remember: the Golden Rule of Notation is to make things as clear as possible to the performers!

I know that's answering your question with a bit of a non-answer, but I thought it was important enough to mention, especially since there is a clear historical precedent.

I would never use nested repeats. Better use this sort of navigation aids. The segno sign is traditional, the other way is to write a big [A] rehearsal mark at the beginning and write Repeat from [A] at the end.

I came up with quite a hack to make it work with playback in Musescore. 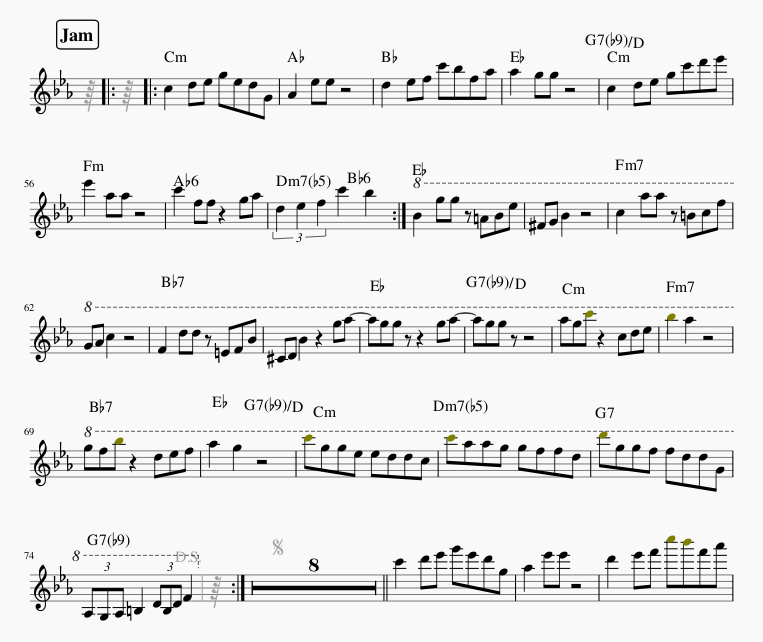 I did not want the whole jam part repeat, even though the scores says so. I tried setting repeat count to 1, but then it did not continue to bar 75. I also tried adding D.S. and Segno to bypass that, but that did not work either.

However, it did work when I introduced an extra bar after 74 and put the D.S. before the extra added bar. So I just introduced the D.S. and Segno and made them invisible as can be seen. I also made the bar line invisible after bar 74.

To get the extra repeat in the beginning I had to introduce an extra bar, which I made only 1/64 long. This is short enough to be barely noticed during playback. If you want to make it even less noticeable, you can temporarily raise the tempo there. The reason I added one extra 1/64 before that was to trick Musescore to make page break work as intended.

If you get confused about these measure counts, I can mention that I used "exclude from measure counts" for these three extra bars.

Clarity and readability are more important than cleverness and compactness.

There are plenty of pieces where the repetitive flow is not notated using any special tricks. A few examples come to mind:

Your section A is just 8 measures, so don't bother using any fancy notation to indicate that it should be played twice. It's much easier on everyone to copy and paste those 8 measures.

Once the nested repeat is eliminated, then it's a matter of notating the indefinite repeat. You'll just have to write a footnote to indicate that it should be repeated at the conductor's discretion.

3
How to denote changing of pipe organ stops during performance?
4
Is there an accepted way to numerically represent note values out of standard notation?
3
Is it wrong to alter bar numbers after repeat endings so they reflect the performance progression rather than the last repeated measure +1?
0
Is this image the normal way to denote starting off the beat?
3
How to specify optional repeats/volta
6
What is the correct notation for a repeat section with 2 different beginnings?
1
D.C. al Fine with standard repeats
2
How to notate popular/contemporary song structures?
6
Is there a definitive notation for multiple repeats?
4
What does this V-Shaped Slur denote?