Shape of a concert harp

Here is a typical concert harp:

The soundboard rises in a straight line from the lower notes to the higher ones. This makes sense as you would expect shorter strings for the higher notes. However, the shape of the neck is more complex. If length were the only factor determining the pitch (I know that it isn't) then the shape would be wrong. The strings would need to decrease in length geometrically. Is there a good physical reason for this shape or is it determined by tradition and aesthetics?

One feature that makes some sense is that the top few notes cease to get (much) shorter. I guess that this is for the obvious reason that if they got too short then they could not be plucked.

If you want to have all your strings made of the same stuff (so they have similar tone) and at the same tension (so they take the same effort to pluck), you have to increase the length to get deeper notes. Unfortunately, you have to double the length every octave. This means an exponential growth in length, and would lead to an unfeasibly big harp.

The curve in the top of the frame ... is there to allow the lengths of the strings to grow exponentially as far as this is feasible. ... But if you extrapolate that curving shape as you go away from the harpist, you can see the harp would get too big before you got to the next octave. So the curvature in the frame changes, and the type of string has to change too, to keep the frequency dropping exponentially and so allow more octaves.

Which has the accepted answer of (emphasis mine):

You would expect it to have an exponential shape. Which it does, more or less, until the bottom end of the scale − where practical considerations rule out 5-metre-tall harps.

And: https://scientificgems.wordpress.com/2017/04/26/mathematics-of-the-harp/ which has two striking images.

The first is what a harp would (sort of) look like if the lengths were purely exponential:

Followed by the shape if the tension and thickness are varied linearly to help shorten the length: 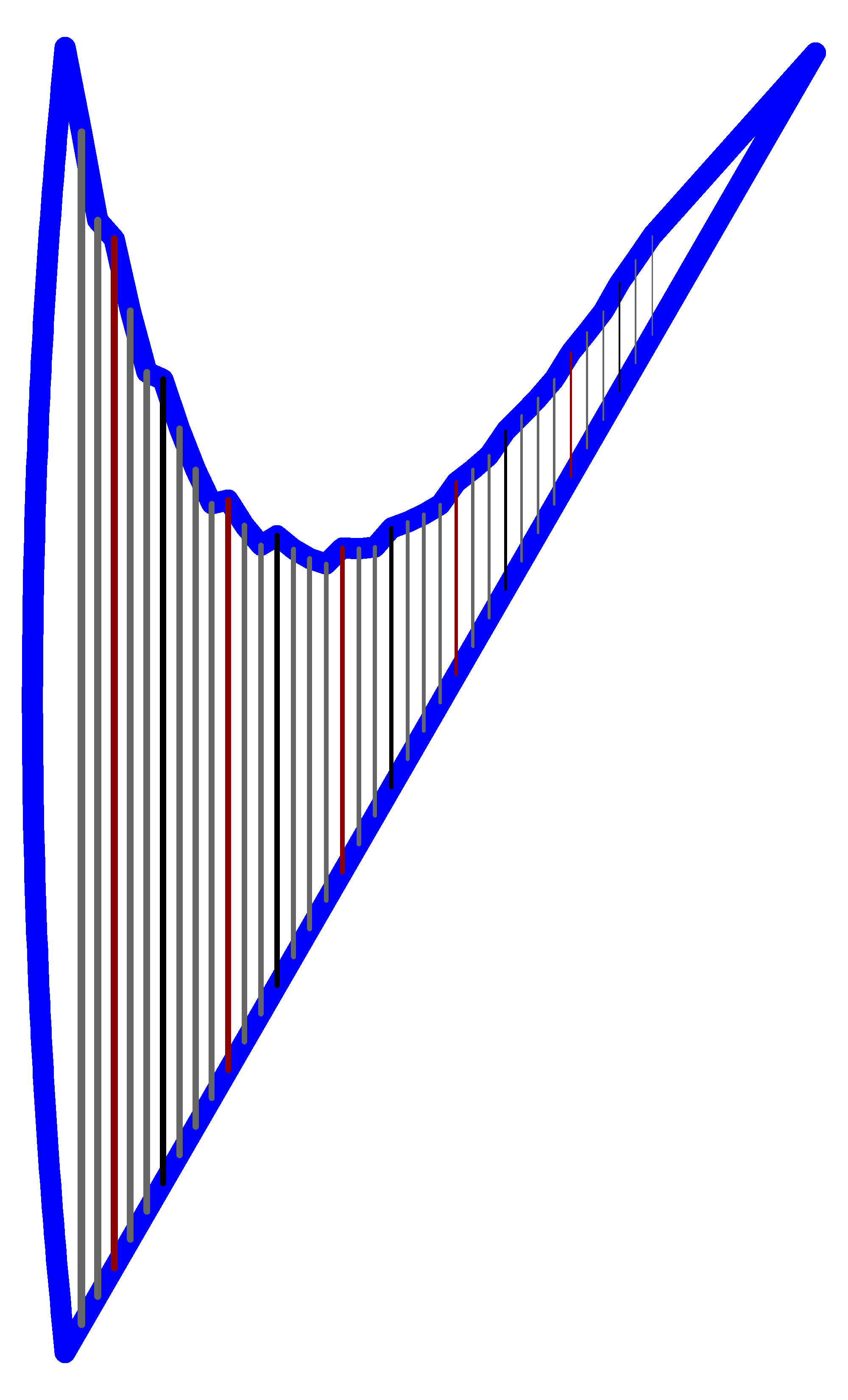 Going just from those two images, we still have the question of why a traditional harp (unlike the electric harp pictured in the last article) curves back towards the floor at the bass end, which is almost certainly to further limit the overall length of the harp. Even with the recurve, concert grand harps are very large instruments.

I suspect there's at least some degree of tradition and aesthetics in the shape.

The note you get when plucking a string depends on a number of factors:

The heaviness in turn depends on:

As Todd Wilcox shows, just changing the length isn't practical. There are also limits as to how much the tension can be changed. If a string is too tight, it is difficult to play and will probably just snap. If it's too loose, it bends too far and then makes a rather un-musical "boing" sound when released.

Most concert harps still use gut strings for the top few octaves. These start out thin at the top end, and get fatter as the octaves go down.

At the point where the strings would get too fat, they are replaced with wire ones. Wire has a higher density than gut, so the strings don't need to be so long. In practice, wire strings are normally "wrapped", with a central wire, and another coiled tightly round it. This increases the mass per unit length but not the stiffness when stretched.

Over the years, the harp makers will have worked out how to adjust the harp strings to get just the right playability and sound.

Not the answer you're looking for? Browse other questions tagged harp or ask your own question.

4
Harp - “Half Pedal”
10
Harp Tuning Tendencies
0
Does the old Druid song, Les Series, have an ancient melody as Villemarque charted it?
3
Can you play harmonics on a harp?
1
Buying a harp, what to consider
6
Scoring for the harp
1
Harp Multiple Glissando
3
Are finger-picking skills from guitar transferable to harp?
2
Weird symbol in score for harp
2
Doubt about Harp Sound