Do we hear bass/baritone solo melody lines as being implicitly "on top of" the accompaniment, for harmonic purposes

I admit that the title of the question sounds a little strange, but I wanted to posit a more general question based on a specific song I was looked at.

I was looking at this arrangement of Chega de Saudade for solo voice and guitar, from a recording from the 2000 album "João: Voz e Violão" (youtube, spotify)

In this minimalist arrangement, João Gilberto makes great use of 3 note voicings, which can serve different (and sometimes ambiguous) harmonic functions.

This voicing, for example:

can serve variously as Am6, Ao7, or D7/A depending on the harmonic context.

Now, there's a passage that has the following melody (syncopation omitted for simplicity's sake):

And I've written the chords (as I think it's fair to say they're implied by their 3 note voicings) on top.

This all seems like a nice harmonisation; a particularly interesting moment is the second bar; conventionally you would simply hold the C minor chord but in this arrangement the guitar plays a rootless Eb7/Bb in the above voicing. Along with the vocal line you get a nice Eb13 chord (missing the root).

Except... the vocal line is actually low enough that the "13" of the melody is lower than the "7" of the chord, so it's really a 6. As expected, if you actually play the notes voiced in this order on one instrument, it sounds awful, yet when sung against the guitar line it sounds wonderful.

Now, at first I thought I could chalk this up to just a "separation" of the voices; because the guitar and vocal have such different timbres and both have good voice leading (the guitar part at this point simply steps down chromatically), the clash works in a way it wouldn't if voiced on the same instrument.

And that would make sense, except, if that was the case, shouldn't I be able to reverse the voicing (putting the 7 in the vocal and the 13 in the guitar) and it sound alright (if not better)?

As it happens, it's relatively easy to adapt the melody so that it lands on the Db not the C. And when played against the 7th or a 9th chord, as expected, there are no clashes and it sounds fine (if less interesting). But when the chord is changed from to a 6 or 6/9 chord, it sounds terrible. However, the original melody sounds fine against the 6 or 6/9 chord. Now, a voicing of an Eb13 chord should always have the 7 below the 13 to sound good (it's just one of those rules, like a minor third over a major sounds fine in blues but never vice versa). And when playing these note clusters (including the note sung by the voice) on one instrument, the voicing with the C above the Db sounds much better. So why should it be different for when that note is sung?

My only explanation is that, because we are hearing a vocal line against a guitar line, even though the pitch of the voice places it in the middle of the guitar chord, we perceive it as above it for some reason; it's the only way I can make sense of which melody/harmony combinations work and which don't.

Having read this question over, it being quite wordy, here is a sketch that shows what I mean more concisely: 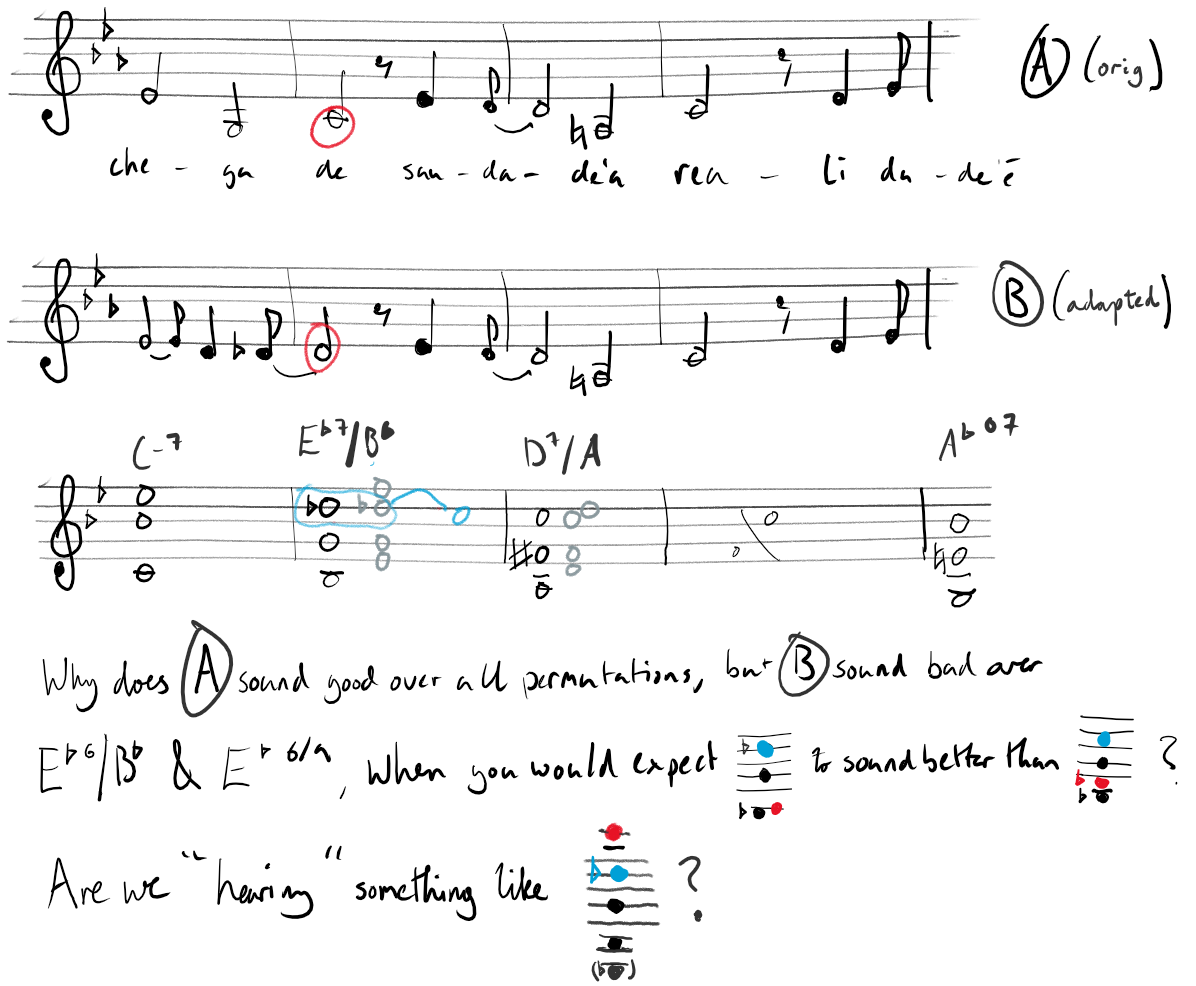 The human voice is created via a complex arrangement with multiple contributing resonators and filtering operations achieved via manipulation of the airflow with the mouth and airway. We model the spectrum of the human voice as being composed of formants, which are not arranged as simple harmonics of a fundamental, as is the spectral structure for many traditional instruments.

When we hear a note and perceive its fundamental frequency, this involves an implicit calculation via the spectral shape of harmonics. One piece of evidence for this is that it's possible to recognize/perceive the fundamental for a note even if its fundamental is removed from the spectrum and we only hear its harmonics. With voices this is less obvious and, especially if the lowest frequency of the voice is in a range that's muddy, the higher formants may stand out more to our perception.

As a disclaimer, much of this is speculation and I'd recommend looking up relevant research. This strikes me as a plausible explanation for why vocals impact the perception of harmony differently, but there might be other things going on. In particular, I suspect at least part of this is due to the fact that our brains have special processing related to voices that 'pull them to the foreground', as we automatically try to parse them as language. Even if a voice is in muddy territory, we'll still try to parse it out (and might get frustrated if we can't quite hear the words.)

As an aside, if you wanted to investigate the above, I'd suggest looking at the different cases you've described in a DAW or other audio processing software using either an EQ chart or Spectrogram. My hypothesis is that in the clashing case, the lowest frequency formant will be muddy with the other low frequency notes, making it hard to perceive. You might also play with sweeping a notch filter over the low range and listening to how it changes the perception of the sound. I suspect of particular interest would be the frequency that is half the middle formant frequency (the fundamental if the formant were the first harmonic of a simple resonating string.) If you have separate recordings of the voice and chord, you can also try slowly mixing in the chord and see if you can hear a transition point where the perceived root changes.

I'm a jazz pianist, rather than guitarist, but I think many of the same comping principles apply.

1) is that your chords shouldn't be in the same range as the vocalist: for female singers (and horns) my default is hovering around middle C and slightly lower before it gets muddy. For male singers, I tend to move it up a bit usually. This is to avoid minor seconds in rootless voicings that clash with the melody. As you said, a major 7th sounds great but inverted becomes a very clashy minor 2nd, which is not the kind of curve ball you want to throw at vocalists.

2) A regular jazz comp for E♭7 would be: G C D♭ F. Note that the original melody, the sixth of the chord, is in there already. As is the D♭. So that helps smooth it over if your guitar voicing looks similar.

I used to think a bass voice would be 'implicitly' heard 'above' the accompaniment.

But, I sometimes sing chord tones when I play piano exercises. I think I'm a baritone. Singing along has helped my ear develop and I now hear characteristic harmonic 'beating' when my voice is low enough to effectively create an inverted chord. It's subtle, but I do hear something. I think part of the subtlety of the beating is due to the timbre difference between voice and piano.

A listener may perceive the low voice as some kind of timbre difference rather than being literally lower than the accompaniment, metaphorically under something, or technically inverted harmony.

Not the answer you're looking for? Browse other questions tagged harmony jazz melody latin-jazz chord-voicings or ask your own question.

4
I can hear the melody, but I can't hear the chords (Lift Every Voice example)
4
Default left-hand piano voicing for Dbmaj7 Eb7-9 Abmaj7
4
Improvising over quartal voicings
2
Thoughtfully Voicing Chords
3
How do inversions of extended chords work?
5
What is going on in this left hand comping by McCoy Tyner (Bb minor blues)?
12
Chord voicings used by backup trios in Motown girl groups?
1
How to choose a chord voicing for a melody?
3
When learning how to write a good melody is it more important to analyze the notes against the bass or against the chord?