It's my understanding that the standard My Favorite Things is in the key of E minor and then modulates to E major.

Since E-minor is the relative minor key of G major, from the major scale perspective, I think think E minor would be E Aeolian, however at the beginning of the song in bars 1 - 4, the harmony in the Real Book transcription is written as E-7 to F#-7 which seems to imply Dorian since it's going from E-7 to F#-7 instead of E-7 to F#-7b5.

(hope I got my spelling right..)

I'm not a schooled musician, so I'm kind of learning on my own and don't want to get this wrong.

I've played other tunes in minor keys like Song For My Father or Summertime, where in the past I've played the first minor chord in the progression up a whole step, but now think that was wrong too.

First off, even in what you might call "harmonically traditional/harmonically unadventurous" music for want of a better term, in minor keys the 6th and the 7th are traditionally "up for grabs". That means that even if the harmony is not doing any "funny business" you might well still see both major and minor 6ths and 7ths.

So, before getting on to Coltrane:

And the melodic, ascending and descending.

The rationale for this traditionally is that the sharp 7 is added to allow you to make a proper V chord, but that it results in a scale that is "ugly" for melodies, and so it needs to be "fixed". Generally, traditionally speaking, you won't see the sharp 6 as a harmonic note, just as a melodic passing note

I could give examples and stuff, but I'm sure there are plenty of better answers out there already for dealing with harmonic vs melodic vs natural minor. And you absolutely should look that up.

However, we are talking about jazz.

The genius of this arrangement is specifically in the fact that it takes a simple melody, and recontextualises it harmonically in a way that breathes new life into it. "My favourite things" is a sort of "pom piddle piddle pom" jaunty little tune that you might whistle while you cut your hedges. And Coltrane turns it into this meditative ethereal, soaring sound painting. And all without changing the melody at all.

Now, how does he do this? There's a lot of elements, but let's just look at the harmony (and only a little piece of it). I'm going to use a lot of subjective language, and bend some theory language to its breaking point here, but please, if any term I use isn't clear to you, please don't hesitate to ask me for clarification.

The implied "sound space" of the melody alone is a kind of a "traditional minor" song. However, the melody doesn't actually use the 6th until very late in the song, and so Coltrane uses it to his advantage. Think of it a bit like those videos where someone draws a cartoon of something, and then adds a few lines to turn it into something else (like the man with no arms turning into a dog): any space "left out" by the melody allows the arranger to fill in the gaps. And to mix visual metaphors, you can fill the white space with any colour you choose.

This melody, for the first few bars, only has 3 notes in it. 3! So the reharmonisation potential is enormous. Now, other notes come along later, so you don't want to back yourself into a corner which you can't get out of easily, but done judiciously it allows you to do some really interesting things with the music.

At the beginning of the piece, they set the scene with a "dorian vibe".

And then, with the same melody still playing, bringing in the Cmaj7 brings you to a new headspace and you hear the same melody again, but it somehow sounds different. The artfulness of this is that the piece starts by sounding like this open meandering free jazz thing, but then suddenly it's a julie andrews melody, but suddenly it sounds completely different. And then it changes again, and it's recontextualised again, and it's somehow still a Julie Andrews song but you're somewhere new.

Now nat6>b6 is quite a distinct sounding change, it has this sort of "inevitable" vibe to it. In fact it's so strong and pleasing that it's enough to build an entire song out of:: Portishead did it and it's great:

OK, so that explains why the motion is pleasing, but what about Dorian in the first place. The chords establish this Dorian vibe, and it's a theme throughout the arrangement. So what are the main differences between "minor" (using "minor" in its strictest sense now, sometimes minor just means any scale with a flat 3) and "dorian"? 2 main things:

1) the 6th, obviously. Why is this significant? The flat 6th can be (of course everything depends on context), one of the "saddest" or "darkest" intervals. And and it's also used to build what can be some of the most mournful progressions. Em-Am is a very mournful progression, whereas Em-A is strident, triumphant sounding. Now often you don't want it to go that far, but you can disguise the natural 6 movement in more ambiguous chords (A9, A11, Em7) so that instead of sounding "triumphant" it sounds more "airy" and "open."

2) You may have noticed that, out of the 3 "traditional" minor scales with sharp and flat 6ths/ 7ths, the dorian isn't included. Why? Traditional tonal/diatonic harmony is all about strong chord movements and resolutions, and the dorian doesn't have many of these; there are a few, but not many. In a sense it really is one of the most "modal" modes. That may seem like a tautology but let me elucidate: Dorian's strength isn't the harmonic movements (changes between different, stable chords) it provides, although it has a couple of interesting ones. It's main strength is that you can treat it as more of a sort of "tonal palette"; none of the notes really clash with each other, so you can just paint these spacey, ambiguous, extended progressions without much functional movement, and instead of living in a world of cadences and resolutions, you can just bathe in sound, and explore the colour or different chord qualities and voicings in a non-linear way.

*OK it's in E flat, but I transposed it for the sake of illustration.

The fact that this is done with "my favourite things" is part of the aesthetic, the juxtaposition of a plain old melody against this soundscape and the way they dance around each other is part of the appeal.

Later on in the song they switch it up again, to a major key centre: the melody doesn't include the minor third so it's possible to play it over a major chord, and this is when it gets really interesting in my book

tl;dr the chords at various points in this song switch around from different implied modes and keys in order to keep creating new contexts for the same melody. It's not just dorian: later on it switches to major too

That's some jazz player's idea of changes for the song. (Actually, it's a very watered-down version of one. Coltrane used some interesting changes, but these aren't them.) Also look at the original song copy (which is pretty close to the arrangement in the original Broadway show, the true source version). It's a more simple harmony. Just Em for the first 4 bars.

But a F#m7b5 comes later, even if it IS mis-represented by Am6, so your question stands. (Commercial publishers often do that. They obviously feel F#m7b5 is too 'hard' for the average strummer.)

If you want a scale, I suppose it's A harmonic minor. Though there's no reason a song, or a section of one, has to all fit one scale. 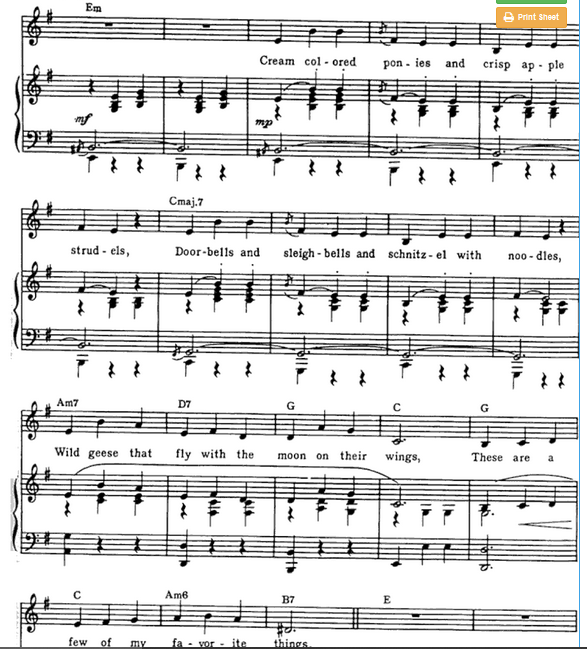 The note that seems to offend or confuse is naturally occurring in the melodic minor scale. You are correct in stating the the natural 6th implies Dorian but that isn't the only possible implication. The minor 7 flat 5 on the ii of the minor key would not make a good vamp in E minor as the -7b5 would imply a resolution via the relative V7 chord of E- which is not implied in the melody.

But there's more to the story than that. The song moves to the Cmaj7, the 4 of G, which is not mysterious as songs typically do that. It does eventually move to G then a proper minor ii V to E- at the end of the melodic phrase. It seems that in this arrangement they don't want to focus on resolving to E-, opting to emphasize the movement to Cmaj. Using the -7b5, as mentioned previously, would create a severe tension and the melody doesn't warrant this, it's light. Also note that the melody does not use the 6th and 7th of E minor, the notes C and D do not appear until the modulation to Gmaj. So, in some sense there is ambiguity in the choice of Aeolian vs Dorian. The only overt occurrence of E- is in the resolution at the last measure with a B7 and a D# in the melody. From an improv point of view this opens up a lot of possibilities, you don't need to stick to the one and only scale or mode of the "key" but exploring E melodic minor would prove interesting (imo).

Minor stuff isn't easy to pigeon-hole precisely. The only minor bit of minor, really, is the minor third. That's the defining factor. So, it's going to include a plethora - Aeolian, Dorian, Phrygian, harmonic and melodic minors.

We just have to accept that any tune in 'minor' can and probably will, include quite a few 'wrong' notes. But isn't that sometimes the case with any music? It goes where we don't expect, and in the past, we've had to make up new theories to encompass that !

As already stated, there are lots of optional notes involved with minors - it's probably easier to list the ones (few) that probably won't be found or used.

Not the answer you're looking for? Browse other questions tagged theory chord-theory modes or ask your own question.

11
Do songs written in certain modes not have keys?
2
Determining closest key when primary contributing factors are shared among keys
3
Question about the key of Bob Marley's “Three Little Birds”
2
Is there such a thing as a Harmonic key besides for Harmonic Aeolian?
1
Key and possible missing “tonic chord”
8
Can you help me understand Modes from the aspect of chord changes?
1
What roman numerals to use for chords borrowed from parallal minor?
4
Aeolian mode harmony