What is this small line between 2 notes? [duplicate] 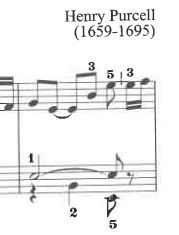 Can someone please let me know what the small vertical line between the 2Es marked 5 and 3 in the treble clef is?

What is the purpose of it? This is in one of my piano music sheets.

It's definitely odd and I haven't seen many of these, but I believe its meaning varies with the each author.

I've seen some use this little vertical line to mark a change of scale/mode from that point onwards, and on others to indicate a break on a repetitive pattern that came before it, usually with note's lengths.

If you can post the score before and after it we can further analyse. Also, try to find another of these vertical lines on the same score so we can rule out a typo.

The small line between the two Es (and the longer one in bass for that matter) is a tie. The note needs to be one beat (one quarter, one crotchet) long, and since there's a quaver before and after it, it makes it easier to read to lwrite two E quavers and tie them. Play the first, keep the note held until you play the B. In l.h. hold the E for two and a half beats.

OR - the vertical line ( not a well-worded question) means play the same note again - but watch that you change fingers first.

I have not been able to find anything that explains this marking, but I have two guesses.

The first is that it has something to do with playing harpsichord, perhaps an indication to change register, since Purcell was writing for harpsichord, not piano.

The second is that it is a phrase marking of sorts, an indication of a break. Beat 3 is ending a phrase. The whole measure is a tonic chord, and the two 16th notes are acting as a pick-up into the next measure. In playing this piece, especially on piano, the repeated Es and change in fingering would necessarily mean that the first E would have to be cut off short if the 2nd E were to be played directly on the second half of beat 3. However, because the LH notes on beat 3 are also eighth notes, it is a clear indication that both hands must hold that 8th note for full value and release together. This then means there is a break before the next phrase to allow for the action of playing a repeated note in the RH, and the 2nd half of beat 3 will being "late."

7
What is this cross staff tied/slurred note supposed to be?
6
Small clefs on score
0
Another question regarding sheet music - piano vs violin or other string instrument
21
What is the meaning of this small vertical line?
10
What does a line through a tie indicate?
2
Workarounds for 10th intervals or larger when arranging for piano
16
Chord stretched across treble clef and bass clef
13
What techniques do you use to read sheet music faster
2
Where to repeat in this Jingle Bells score?