In a recent conversation I had, there was a disagreement regarding the definition of Functional Harmony. As I've understood it, Functional Harmony would be defined by chords having a function and is generally distinct from Modal Harmony, Atonal Harmony and Non-Functional Harmony (obviously). We were debating whether the classic I-V-vi-IV pop progression would be considered functional or not. In my thought process, this wouldn't be functional, as the actual functions of the chords are never fulfilled: the dominant chord never resolves to the tonic; the predominant chord never precedes the dominant chord. They argued that the dominant resolves to vi, which is a tonic functioning chord, giving a deceptive cadence, and the IV resolving to I gives a plagal cadence. In my estimation, the V-vi relationship doesn't really feel like a cadence, as it's in the middle of the phrase, but even if it were thought of this way, the progression would still never be giving the true V-I cadence; resolving to a tonic functioning chord alone does not satisfy the dominant to tonic relationship. So I would think of this progression as being more so a Modal progression, most commonly Ionian mode.

A complete explanation of what functional harmony is seems too broad, so instead I will merely assert as an answer that, as mentioned in a comment, the presence or absence of cadences does not seem to have any effect on whether a piece can reasonably be analyzed as functional harmony.

The core element of functional harmony is the idea that each chord has a certain relationship to a tonal center, called the tonic in FH (forgive the abbreviation) and also popularly called the "keynote". So if we perceive that there is a meaningful relationship between each chord used and a central note such that we "feel" that note is set up as a tonal center, we could usefully analyze the piece in question with functional harmony.

Note a very important concept: a piece isn't definitively a case of any kind of harmonic system - it's just a piece of music. A more useful way to look at things is whether we can use a particular music theoretic framework to gain insight into a piece. So, it's not so helpful to ask "is this pop song an example of functional harmony?" Instead, we might ask, "can we understand this piece better if we analyze it using functional harmony."

One way to "hear" how well a piece can be understood with functional harmony might be to simply play the candidate tonic chord and if it sounds like a resolution or contains no musical tension, then you have at least established the tonic function for that chord.

...that seems to be the basis of talking about 'functionality' on other levels. Like this introduction from Schoenberg... 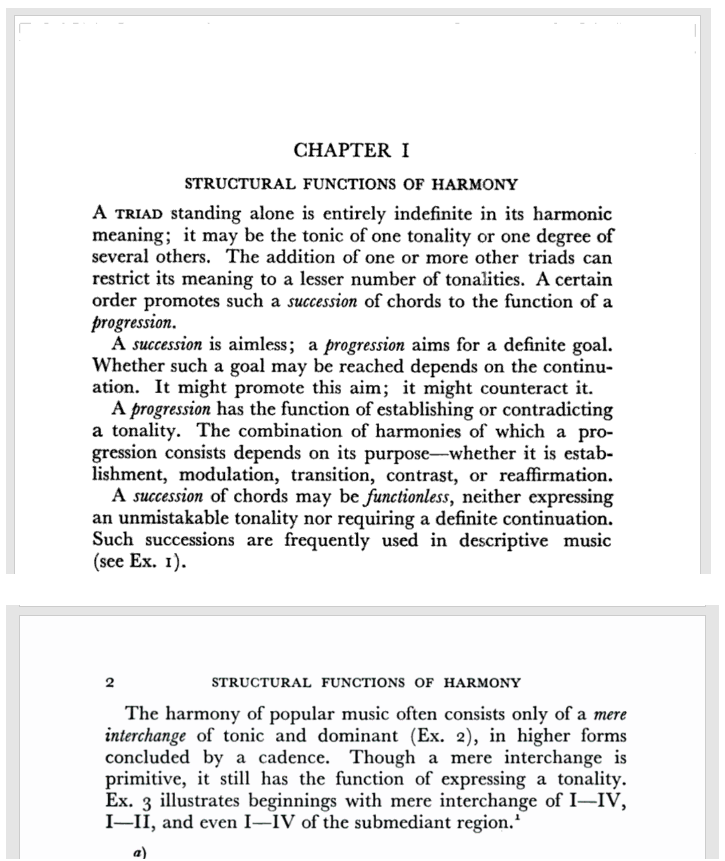 Those screen shots are from the Harvard Dictionary of Music and Structural Functions of Harmony.

If you think like Schoenberg, it seems the answer is "yes" for "higher" forms.

But, I think a pattern like I-V-vi-IV fits in with his "popular music" example of a "mere interchange." I understand that to mean not strongly goal driven where a cadence is the goal. I imagine he would have called I-V-vi-IV - and other pop "chord progressions" primitive expressions of tonality because they don't have formal cadences, but they do express a tonality. So those chords are functioning to express a tonality, but they are not high level functional harmony.

Just to be clear, I'm not advocating this notion of 'functional' versus 'primitive' attitude. I just posted it as an example of how the term has been used.

Personally, I take the attitude that Reimann 'functional' or 'non-functional' simply means you can label music with Roman numeral analysis or not and nothing more. If music doesn't fit with Reimann's system, and is called 'non-functional' within that system, it means absolutely nothing about the quality of the music. 'Non-functional' doesn't necessarily mean 'bad', 'vague', or any other negative connotation. Most importantly music described as 'Reimann non-functional' does not mean that chords and harmony in such music aren't functioning in some other way! It doesn't even mean the music isn't tonal! You just need to use other analysis tools.

Functional Harmony is a style of harmonic analysis and practice in which chords, the basic units of harmony, are used in a way where the sequence of chords used may be understood as having a single effect, as opposed to being only analyzed by themselves. In Functional Harmony, the order of chords has meaning.

Pick at that definition as you will, but it's as good as I'm going to get without looking it up. Anyway, would pop progressions fit into this definition? I'd say you are somewhat right, in that Pop music tends away from that style where cadences are analysed, as pop tends not to think in terms of cadences, but rather in terms of groupings of about four chords.

But, does the order of chords have meaning? I'd argue yes. While it's true that almost any group of the four or so most often used pop chords will work, the order in which they appear matters (I-V-IV-vi wouldn't really work). So it's kind of ambiguous on whether pop music follows functional harmony.

One could try to define pop as functional harmony in that pop definitely doesn't have the characteristics of Atonal music, and pop tends not to really use the Ideas that Modal music does, so one could argue that pop therefore is functional. (Nonfunctional, as I understand, is just a term for music that is not functional, which I think includes the other two you listed)

Given that I can't provide an empirical answer, I hope I can bring new perspectives to this interesting argument, as this is a question that really stumped me. Great question!

I reached out to one of my theory teachers from college and he responded with his thought process, so I thought I'd share:

"Interesting question! I think that pop and rock progressions often function differently, but that doesn't mean they're not functional. Think about the basic blues progression, where you have V fall to IV and then I. While that's not standard practice harmony, I believe we ARE hearing dominant and then subdominant functions, just in a different sequence than we're used to. Sometimes, especially in the more inventive Lennon/Radiohead style chord progs, functionality IS laid aside. But I generally think that diatonic progressions such as the one you list have to be understood as functional, even if the functions are somewhat stood upon their head."

I-V-vi is functional if we see it as an interrupted cadence. You can't frustrate a tendency that doesn't exist!

A more interesting question would be 'is I-♭VII-I functional?' What about I-♭VII-IV-I? We can find a 'functional' V of IV in the latter progression. We can just about twist ♭VII into a dominant substitute in the first one. Does this usefully describe the music, or just satisfy our need for labels?

I'd like to give an answer that interprets functional analysis broadly, not as simply Riemann analysis, but as a way of understanding harmony by examining how chords "function" and flow into each other diachronically.

But first let me speak like a linguist. In English we have loanwords from Latin, like data. But they are not grammatically treated like Latin: most English speakers will say "The data shows" instead of "The data show" even though data, in Latin, is plural. A Latin speaker, studying English, might conclude that English "lacks" the grammar of plurality. But we know that that's not true; English has plurality, but English's sense of plurality is different from Latin's, and there's no law requiring that English obey Latin grammar when English incorporates Latin words.

A responsible linguist, then, won't be beholden to the idea that "data is plural, so if it's used as a singular, something is wrong." Instead, linguists have to make sense of the language as it is. This is called descriptivism.

In the same way, functional analysis, as practiced by modern theorists, seeks to be descriptive rather than prescriptive. In Classical music, V chords typically cadence to I chords and so on in the way you've pointed out, and if you wanted to teach someone to write Classical music, you could prescribe that chords should follow those functions.

But pop is not Classical music. Even as pop music clearly borrows many Classical harmonic concepts (like building triads on each degree of the major scale), pop has a unique harmonic grammar. Pop harmonies don't necessarily conform to Classical notions of functionality, but this doesn't mean they aren't functional—clearly each chord has a role or function to play in its context!

Not the answer you're looking for? Browse other questions tagged theory chord-theory harmony functional-harmony or ask your own question.

7
What does “function” actually mean in music?
1
What determines the function of a chord?

6
iii9 - I progression in Bach?
13
How do you write successive, non-functional chord progressions?
5
How a chord is analyzed as a “chromatic mediant of the V”?
2
Is a v-VI♭ progression in a minor key still a deceptive cadence?
5
Guidelines for writing a chord progression
4
Chromatic Functional Harmony (Musical Theory of Everything)
4
How is Db major functioning here? Subdominant Prolongation? Some kind of Dominant?
2
How does the concept of functional harmony help me pick the next chord while composing?
4
The 2nd flat in a minor chord progression