I've been studying the CAGED system for guitar, I know some people don't like it but to me it seems a great way to visualize the fretboard. Now, I understand what are triads and inversions but my question is... what happens if I remove the root and replace it with another notes from the scale? (moving it down one step to the 7, for example). It still sounds good but if there's no root I don't really know what I'm playing. Also, I've noticed that it's possible to play other CAGED shapes inside one shape just using the scale notes within that shape... here's a picture to explain it better: 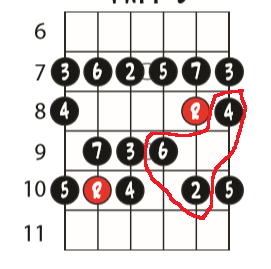 This is the C shape MAJOR G shape MAJOR scale... but the highlighted notes are also the 2nd inversion of the D shape minor chord.. how can this be possible ? If I play this triad does it mean I've switched to a minor or can I still think about it as a major?

Any help making sense of this confusion would be greatly appreciated. Thanks!

I prefer to think of CAGED as chord shapes - all open that can be barred at any point to produce new chords. Seeing lots of blobs on a fretboard picture can never be anything but confusing!

That apart, shown is G major scale, or possibly B Phrygian!! Scales are far more frequently played root to root, whereas the one shown gives every possible note reachable between frets 7 and 10 - even more confusing, as playing them all, in order, doesn't sound like a 'proper' scale.

However, what you are experiencing, if I read the question right, is that diatonic triads can have one note changed, then they make a different chord. Of course this will happen. In key C major, the chord C is spelled CEG, in whichever order - called inversion, but only those 3 notes.

So, taking C, as CEG, and changing one note, will produce a different chord. Swap C for B, it's Em. Swap G for A, it's Am. Swapping the E for the note next will either make Csus2 or Csus4, which isn't really part of what you ask, even though it can be done - bearing in mind Csus2 = Gsus4...

From your diagram, using 6,2 and 4, in key G, that gives the notes E, A and C, making the ii chord in G - A minor. Look at the shape of the three notes on the top three strings - it's the same shape as an open Dm chord that beginners may play.

Minor chords are just that - minors; majors, majors. Within any key, there can be found 3 major and 3 minor chords (plus a less used diminished). So, in conclusion, taking notes from the major scale won't merely give major chords. I'm sure you're not the first person to consider this as confusing!

C Maj, d min, e min, F maj, G Maj, a min, and b diminished. (you could extend this further by adding the next 3rd up to get all the diatonic 7th chords.)

The relationship for all major keys will be the same: Maj, min, min, Maj, Maj, min, Dim.

(the diagram above is not C major, but G major) On the 7th fret for example you have, on the highest 3 strings (3, 5, 7) which is a B minor triad, diatonic to the key (of G), it is the 3rd chord, the iii (3 minor)! If you kept looking you would actually find shapes for all of the diatonic triads.

Now take your "caged shapes", lets start with the A major shape on the 2, 3, 4 strings (b,g,d strings). If you find the A shape on the 7th fret you have a D major triad (which is diatonic to the key of G (D major is the V or 5th).

If you want to play a chord that is not in the key, you can do that by playing a known shape but just know that you are playing notes that are not marked in your diagram above. For example you can play d minor (not in the key of G) by taking your D major chord (using the A shape in my example above, 7th fret on the g,b,d strings) and flat the f# on the b string, 7th fret moved to the 6th fret), notice that this minor is the same shape that you would play an open A minor chord just slid up to the 7th fret, just like we played the D major with the A major shape slid up to the 7th fret.

One more point of clarification: The chord you are playing at the moment doesn't change the key you are in, since each key has many chords. What key you are in has more to do with the tonal center, where you feel the song is at rest (G in G major for example). You can play A minor > D major > G major and you will feel strongly that you were in the key of G since that is a ii > V > I cadence.

9
How do I play notes in a scale/key freely up and down the neck without getting caught in boxes and shapes?
1
Major scale box patterns
10
What's the CAGED system good for?
3
Learning the scales using triads
2
What scale shape does Enter Sandman intro use?
1
Why use guitar scale patterns when we can just use CAGED?
3
Does the root note fall on the same place using CAGED system on guitar?
2
How are guitar scale shapes/patterns named?
1
can someone help me make sense of guitar inversions