maybe this is a dumb question but I want to ask when you have in the music sheet for example the symbol of the chord C7 or whatever; to put a symbol instead notes means you can play random the keys in the piano as you want and that correspond to that chord in the time you want?

For example in notes in the music sheet is very clear, you follow each note according how it is in the music sheet and the time, of course very easy (half, whole, etc.). But sometimes I see in lead sheets the chord above the melody notes, how you know how to play the chord above the notes in the lead or music sheet? In other cases there are slashes and you don’t see any note, but when someone is playing magically that slashes or chord symbols, as I mentioned before, are converted in a beautiful song or instruments.

I ask this to know how you interpret the chord symbols or slashes and how you know the complexity of the full song included inside of them, maybe is a random and will depend on the artist?

For example look the picture the chords above the notes what mean, mean the notes in the melody of the melad sheet or another different melody and how is played, as I said before?

Yes, you can play notes that correspond to the chords, with the timing you want. This is not, as a rule, done randomly, however.

With a simple piece of music, musicians will often use notes from the triad (1,3 and 5) of the given chord, maybe including the seventh if the chord is a seventh chord. Often, inversions of the chords will be used to produce a pleasing movement in the voices of the chords (sometimes you will seek to keep one note constant between successive chords). If you are playing the melody with the right hand on piano, you will want to voice the chords so that they can be readily played with the left hand.

In your example, the first four chords are G, Em, C, G. The notes in the triads are: GBD,EGB,CEG,GBD. You will notice that you can play the note G in all four chords. You can play B in three of the chords, and D and E in two of the chords. This means that you don't necessarily have to be jumping around too far to change from one chord to the next, provided you invert some chords.

In terms of the rhythm, you may hold each chord for 3 beats (in ¾ time signature), you may just play on the first beat of each bar, or you may wish to make up a rhythmic pattern with which to play the chords.

The 'slashes' you mentioned could have either of two meanings. First, rather than writing G, G, G, G when a chord is repeated in successive bars, you can write G / / /. Second, if the chord is written G/E, the slash indicates that you should play a G chord and include E as the bass (lowest) note.

A chord is composed of at least 2 notes played together. For the list below I'll be assuming the C Chord

Slashed chords are inverted chords. So instead of playing C7 w/ the C note as the base chord, you can play the E (1st inversion, C7/E), G (2nd inversion, C7/G), or Bb (3rd inversion, C7/Bb)` as your base note. It makes your music sound more beautiful.

In the case of your image, the song is played in the key of G. The notes to play then would be G, A, B, C, D, E, F#. And the standard chords in the G major scale would be:

Yes, you are correct. The chord symbols indicate the harmony, the interpretation is then left to the performer.

Here are four possible versions for piano. There could be many more! You could choose to be dramatic, or to be flowing. Complex or sparse. With this particular song you could try to emulate Dylan's guitar strumming, or 'do your own thing'. 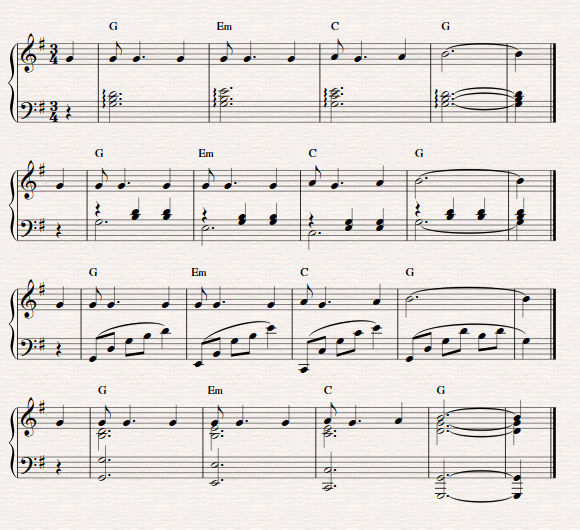 Not the answer you're looking for? Browse other questions tagged theory chord-theory composition or ask your own question.

32
What is the relationship between the melody line and the rhythm chords?
15
What is the proper name of the dash symbol over a note and how to play it
5
Which notes are considered bassline/melodyline in a sheet music?
7
Question about playing chords
4
The melody+chords pattern in perspective
0
Where To Start With Contemporary Theory
1
Convert midi data into lead sheet with roman numeral theory
1
Eighth Slash Notes for a Simile
4
Why do some composers/songwriters choose inverted chords over root position chords?
5
What is the chord played by 1-6-1?