Why such a difference in balance adding 1 instrument?

I am writing a canon for piano quintet and I notice I'm getting a lot of balance issues.

When it starts with 2 measures of piano solo, of course there are no such issues. I introduce new variations in the right hand of the piano while keeping the bass line Alberti bass. Then I have the melody go up from the great octave to the second octave as it goes through the string quartet starting with the cello and ending with the first violin.

When I introduce the first variation and I have the cello playing the original melody, it is perfectly balanced. Out of all the piano + other solo instrument combinations I have heard, I think the most perfectly balanced is the piano cello duo. You can have both instruments at the same dynamic and in the same octave without any balance issues. And the cello has such a warm sound to it.

When the viola comes in, the piano starts to faze out. I can barely hear the eighth notes against the viola and cello. It gets even worse with the violins because then the cello also starts to faze out. A violin will sound louder than a cello playing the same note in the same octave at the same dynamic. The viola will as well but to a lesser degree.

So I either need to make the cello and piano louder or I need to make the violins and viola softer. I mean, if I was writing a piano concerto, this wouldn't be a big deal, violins predominating the sound. But with as small of a group as a piano quintet, it is a much bigger deal.

Here is my hypothesis as to why a single violin makes it sound much louder, like it is forte or fortissimo when it is really mezzo forte.

The timbre of the violin has more of the higher harmonics. Also the higher the pitch and the smaller the instrument, the more piercing an instrument sounds. This is how come a piccolo can overpower the orchestra if the piece isn't balanced right. Whereas the cello timbre is much closer to that of a piano. 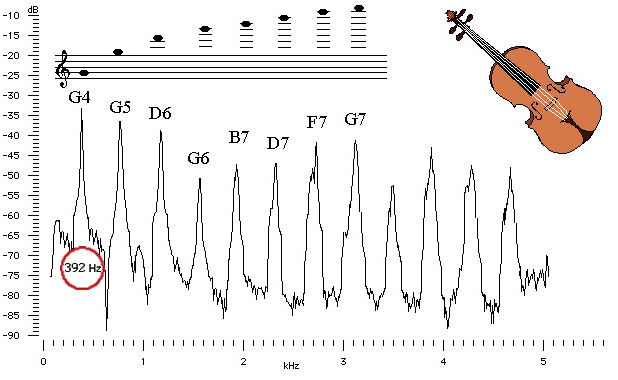 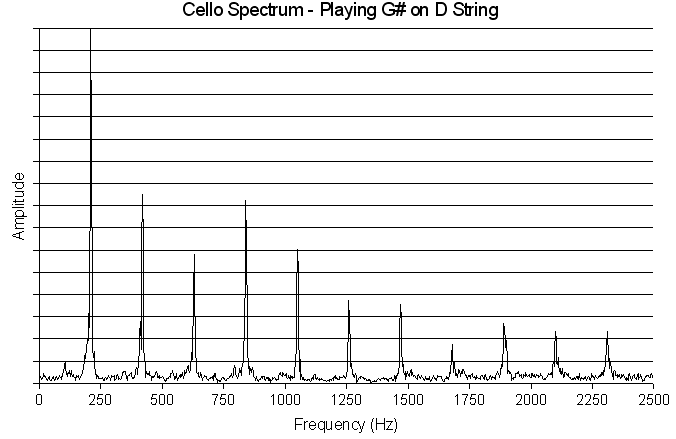 This is what the cello timbre looks like, much more of the lower harmonics than the upper harmonics 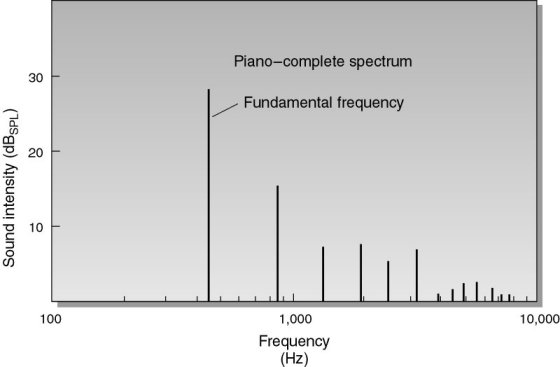 And here is what the piano timbre looks like around middle C. Looks like the cello timbre taken to the extreme with the more percussive sound.

But is that why adding a violin at the same dynamic as the cello makes the piece sound louder even after note and octave are accounted for is because of more higher harmonics? And is that also why the cello and piano faze out?

Browse other questions tagged piano composition orchestral-strings balance or ask your own question.

8
Can someone clarify the range of orchestral strings?
7
Learning my first instrument
1
Sound of Octave-Tremolos
0
Converting midi composition into orcherstral arrangement
42
Why doesn't my synthesized note sound natural?
4
Dynamic markings and relative sound levels of instuments
2
Workarounds for 10th intervals or larger when arranging for piano
2
Why do arpeggios tend to blend at quiet dynamics?
9
Why does the exponential curve that shows up in the orchestra not overwhelm anything?