While learning one of the Mazurka's of Chopin, I came across a chord that I think is an appoggiatura chord but I need a second opinion. The piece is Chopin Mazurka in A minor Op. 68 No. 2 and the chord is on the third beat of the second measure. The notes of the chord are E B on the bass clef and D on the treble (E B D).

I tried to analyze it by thinking that it's major or minor but that obviously doesn't make sense because the chord doesn't have a third to make it minor or major. From E to B is a perfect fifth, then there's a D.

The D has a trill so that it becomes a D#. I'm aware that the chord then becomes E B D# which makes me assume that it's another appoggiatura chord.

I've been studying the Harmony and Voice Leading book by Carl Schachter and Edward Aldwell and in the book you learn about complete and incomplete chords and it states that the third is never omitted out of a triad except for special effects, and the fifth is sometimes omitted. It seems that Chopin wanted the third of this chord omitted. It's definitely not Bmin/E or a slash chord, it's a nonfunctional chord like an appoggiatura chord, double appoggiatura, triple appoggiatura, something like that. Or maybe it's just an incomplete chord? Am I correct?

Here's a picture of the chord:

Here's the piece of music, the sheet music is in the video. Give it a listen:

I would actually recommend you view this less as a chord and more as a result of voice leading. More specifically, I recommend you think of this entire measure as a tonic A-minor chord with lower neighbor tones in two voices: 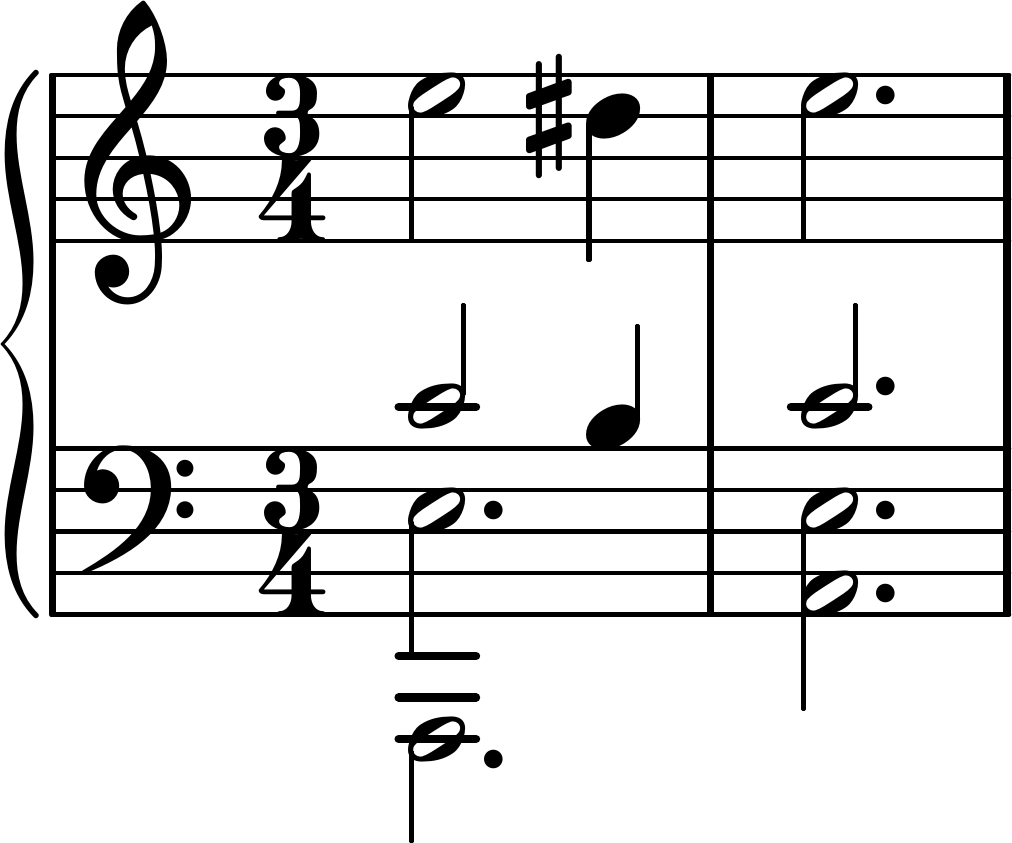 When viewed this way, we understand that the B and D♯ are just non-chord tones that embellish the C and E that surround them. This third beat thus isn't really a chord at all!

Given that you're studying from the Aldwell/Schachter book, I think it's especially important that you try and view it this way. Those authors shy away from treating every vertical sonority as its own harmony, often preferring instead to understand those sonorities as results of voice leading.

I agree that the two notes appear to be arising in voice leading, but that's still too simple. If the tempo was faster I would be more in agreement. We'd should remember, maybe, that the lydian mode features prominently in the mazurkas. The lydian mode has a major 3rd and a tritone (raised 4th), but this is in a minor key. The slow tempo causes the d# to sound more powerful and eery. The pattern is repeated in C major with an f# in the second phrase, which is perfectly lydian. The half steps are retained in both voices in the second phrase as well. Chopin was a daring harmonizer. He could have left out the left hand b (which is a. diatonic pitch) and written another c in the left hand, but the effect wouldn't be as strong. I concede that the second phrase includes a chromatic variant in the tenor voice (d# with the right hand f#), but again, the effect in the major key is strengthened by the chromatic choice of d#. Danced mazurkas are usually pretty jolly, but Chopin's are hybrids, using elements of three different dances: mazurek, obradek and kujavjak (spelling?). This isn't a jolly mazurka. Chopin is borrowing from both major and minor modes alternately. He's also trying to use a 'jolly' rhythmic pattern in a rather unjolly musical climate (I mean the atmosphere of this particular piece). I believe Chopin invented the mazurka as a vehicle to combine the effects of those three dances. I may be mistaken, but mazurkas don't appear (in art music) before his time, and are uncommon in art music afterwards.

Not the answer you're looking for? Browse other questions tagged chords chord-theory harmony or ask your own question.