I was trying to learn the chromatic scale and associate it with carnatic equivalents (I know equal temperment is not the way with indian music, but it interest me to relate and learn it to certain scales) I stumbled upon this link and found this image. 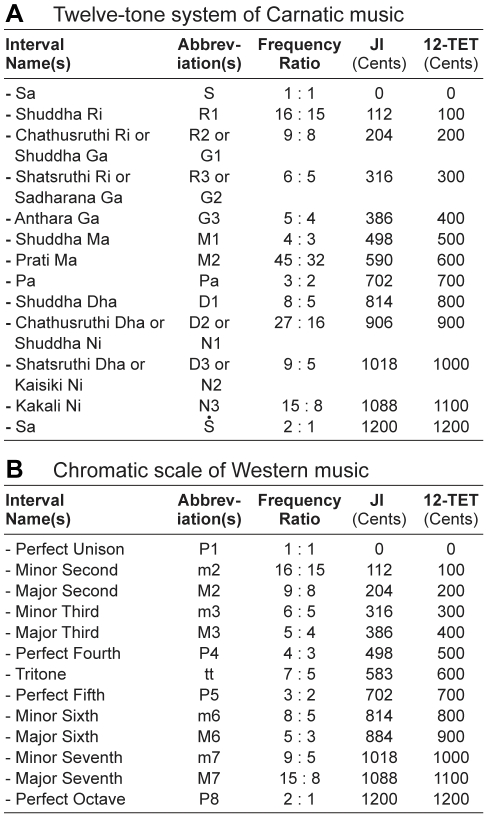 Just found a better article which clears some questions on the topic here With this useful image. 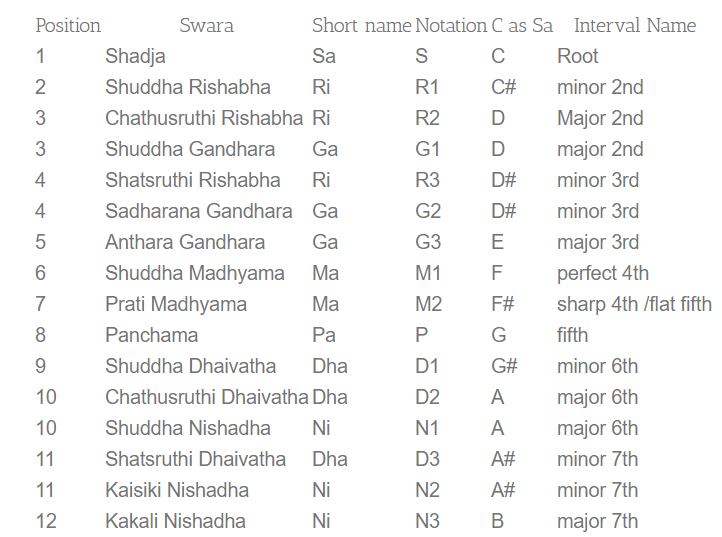 Ultimately, I can only give a partial answer, but if I’m understanding the question, I think it will still be helpful.

Often, western music is discussed using solfège: the scale degrees 1–7 are called do, re, mi, fa, sol, la, and ti or si. In many places these are the names of the notes; what, in America, are referred to as notes C–B are referred to in Italy and France as Do–Si. However, for purposes of comparison with the Carnatic system, it’s more helpful to think of so-called movable-do systems, where “do” always refers to the tonic of the key.

For Carnatic music, a very similar system called Sargam is used. The degrees of a raag are sung as sa, ri, ga, ma, pa, dha and ni. So that’s the origin of those terms in the chart above, they then just use the first letters for their abbreviations and add numbers for any scale degrees that have multiple versions. There are vast numbers of raags, and they all have different ways of presenting these scale degrees. The tuning of, for example, ma, in one raag might be quite different from ma in another. This is vaguely similar to the fact that both western major and minor scales have a “mi” note, but that pitch will be a full half step lower in the minor scales than in the major. However, the similarities end there. For one thing, every raag have “gamaka” associated with each scale degree that will be quite different from one to the next. Gamaka is sometimes translated as “ornament”, but that has an implication of being inessential, the gamaka are part of the essence of each raag. Another huge difference between western scales and raags is that the some scale degrees might have different versions, some might be omitted, and some might be different tunings on the way up than on the way down. One can find some parallels in common-practice western music (such as the so-called melodic minor scale), but the overall soundworld and theoretical world are very different.

So, I’m a little skeptical about the whole idea of a 12-note Carnatic system. It sounds a lot like someone trying to impose a Western concept of pitch organization onto a music that it doesn’t fit very well. That being said, I’m not an ethnomusicologist, and I’m not familiar with the study that produced this chart, so there might be more to it than I can see. I know enough to be very leery of this kind of analysis—especially given the enormous variety of raags in Carnatic music—but not enough to reject it outright or evaluate the central claims.

It isn’t clear from your question, but in case you’re asking about some of the other abbreviations: JI just stands for Just Intonation. 12-TET is short for 12-tone equal temperament. Cents are a way of measuring pitch such that there are exactly 100¢ in an equally-tempered half step.

Not the answer you're looking for? Browse other questions tagged theory scales learning musicology indian-classical or ask your own question.

2
Methodology to Master Guitar as an adult
22
Difference between keys and scales?
3
What is the carnatic equivalent taal name for Jhaptaal?
4
Mastering carnatic gamakas (slides, deflections)
5
How does Indian and Western Musical contain Seven Notes ? Is it a Coincidence?
7
Violin - Western Classical vs indian classical. How different are they?
6
Western vs Indian Carnatic style of violin playing
6
Is there a theory of heptatonic scales with 1.5-step intervals?