I've been trying to analyse the song "Dust to Dust" by John Kirkpatrick to perhaps get some insight into how one writes in Locrian without sounding it sounding ugly. The only thing I've noticed is that Kirkpatrick seems to avoid C, and when he does hit it he seems to progress directly to the modal tonic. I can't find any harmonic patterns from just the one line, I don't know how I would especially for locrian, but I strongly suspect this is purely melody and is lacking in harmony (at least harmony in a traditional sense). What patterns are there in "Dust to Dust" and how did Kirkpatrick manage to successfully write a good song in locrian?

Edit: I assumed it was Kirkpatrick who sung the song in the link. It is not, it is Jon Boden. Apologies for misattributing the singer.

First of all, wow! That is a great song and great performance. Wish I could sing like that.

Second, I would say the entire song is an elaboration of a half-diminished chord (B, D, F, A) with a kind of contrast to an implied A minor chord near the end of the refrain.

Rather than avoiding the C it provides the flat 2nd degree.

The degree that is avoided entirely is the G.

I feel the avoidance of G and use of A between the B and F makes the A seem like a chord tone. That point could be debated, because the A is always on a weak beat except for the end of the refrain.

About that A for the end of the refrain. It goes from E to A back to E so that seems like an implied A minor chord. I'll call this a harmonic contrast rather than a cadence, because technically you can't cadence to a diminished chord. Funny thing is, it feels like a cadence to me, even though it doesn't fit the textbook definition. Some people call root movement by whole step (like bVII to i) a cadence in folk music. Here the root moves a whole step from A to B and so is similar.

Personally I love the half-diminished sound. So it doesn't surprise me that this melody is so haunting and beautiful.

Just for fun I set the tune to some chords. To deal with the "problem" of the tonic chord being a diminished chord, I simply avoided the issue and used a G chord so the B becomes the third of the chord. I suppose this obscures the locrian quality of the melody. But I did get some nice root progressions by 4th/5th, a relative major/minor, and a bVII all which seems to me appropriate for folk music. 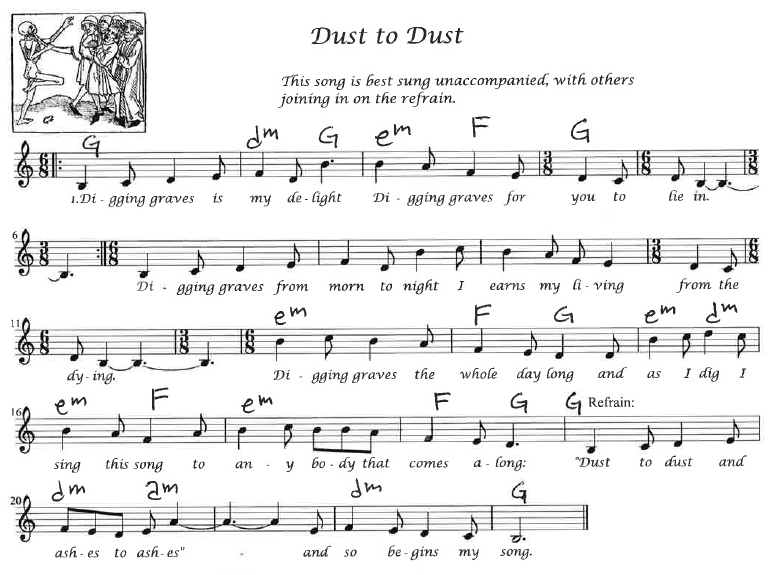 ...I find it hard to see the phrasing on that score, so in ascii...

Not the answer you're looking for? Browse other questions tagged modes analysis folk or ask your own question.