I am trying to wire up a baritone electric guitar with controls similar to a G&L legacy (volume, treble, bass). My question is whether or not I need to change the capacitor values to account for the lower range of the Instrument, and how to figure out what the equivalent values would be if so?

This is a diagram for the wiring for a standard guitar in E. 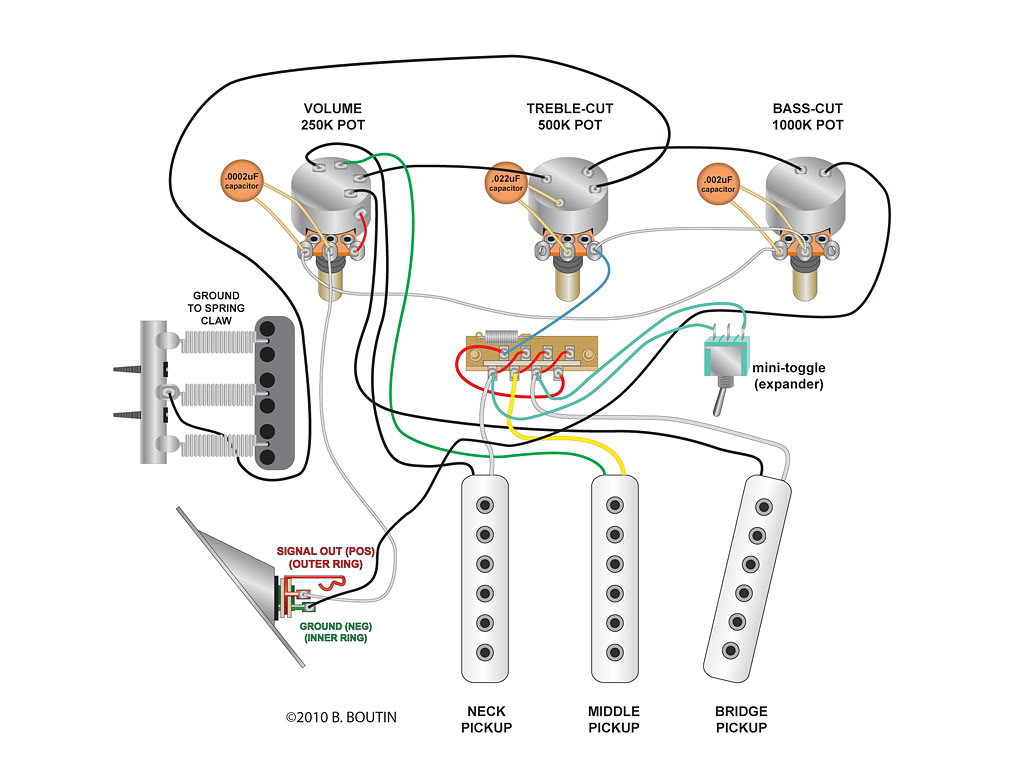 As so often in music, it's up to your taste. A bigger cap for the bass-cut might make sense, but preferrably use a properly designed modern circuit instead of that vintage one.

Guitar tone controls are a very crude means of affecting the signal. The treble cut does multiple things over the range of the pot:

Another matter is the low-cut control. The purpose of this is precisely to tame a too rumbly low end. Note that in the neutral position you short out the capacitor so again its value doesn't matter there. As you turn up the pot, only the high-frequency parts can get through the capacitor whereas the low frequencies are attenuated by the voltage divider consisting of the bass pot and the volume pot (horrible design, this). Now .002 μF is a reasonably low value for a bass-cut capacitor; with the 250 kΩ volume pot that'll give a cutoff at 318 Hz. Sensible value for standard guitar, but on a bariton that's a bit extreme. This can still be musically useful – the low notes will sound very hollow and may have good rythmic qualities without clashing with the bass. But it's likely enough you would find yourself never fully engaging the bass-cut if its edge is so high, which is a problem because in a middle position this control will also remove some of the resonance peak, like the hi-cut does, making it impossible to just slightly clear up the sound because that removes treble that's needed for clarity!

With a slightly bigger bass-cut cap, that wouldn't be a problem, you could just cut it completely and still get some baritone quality but also a full spectrum. Alternatively you could use 500 kΩ also for the volume pot, that would bring the cutoff down to 160 Hz. The downside is that would not be able to aggressively cut the bass anymore at all. (If fact even the 318 Hz might actually not be enough to remove trouble in the very low end, because the reduction is limited to at 12 dB, so you might be able to get rid only of the lows that give the baritone its sonority but not enough of the rumble that clashes with the bass.)

A technically favourable solution would thus be to use an active decoupling circuit before the low-cut. Then you could use that pot to select any low-cut frequency, and thus get access to all the range from pseudo-bass to clear bariton to hollow jangle. You can get active circuits with properly independent controls for both treble and bass, mostly used for bass guitar but would also make a great deal of sense for baritone.

Not the answer you're looking for? Browse other questions tagged guitar electric-guitar electronics wiring or ask your own question.

5
Guitar audio interface matching tone of my old amp, and a problem
4
Electric guitar tone control fault
3
How to find a rock sound on a mini amplifier for my guitar?
0
low gain pre-amp does not cause distortion. But hi-gain pre-amp does. Is this a guitar wiring issue?
5
Why is this guitar making so much noise?
2
Custom HSS wiring Strat
1
bare wires from pickups in ibanez diagram confusion
4
Electric guitar troubleshooting
2
Choosing a (baritone) guitar for stoner rock