I'm trying to connect my electric guitar to the pc and record some great distortion sound, what I have in mind is something that sounds really really good in fast metal solos

I've been struggling to get a decent sound for a while and I always failed, I'm unsure how to use the equipment I have which is the following: 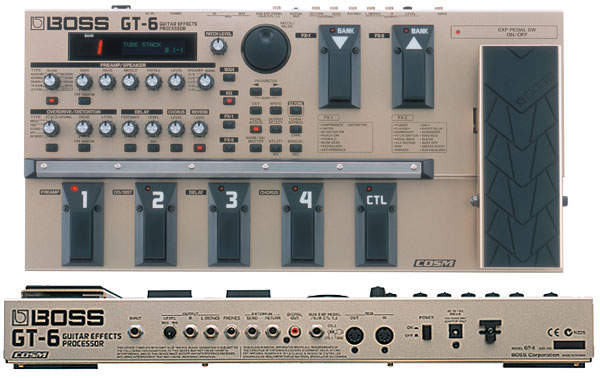 The problem is the crappy sound so I have some questions: what distortion should I use? The GT6 distortion? Or should I record my guitar without any effect and add it later with softwares like amplitube/iZotope/other ? And in the latter case, how am I supposed to do this?

Any advice is highly welcome

There are basically three ways to go.

Your GT-6 does amp modelling, so you have all the equipment you need. First set your GT-6 to a clean sound, and make sure you can record that properly. Check with headphones plugged directly into the GT-6 headphone socket, before working on the link to the PC.

If for some reason you really have to use analogue to link your GT-6 to your audio interface, bear in mind that the GT-6 has a stereo output. Things like reverb do make use of the stereo feature, so hook up both stereo channels (e.g. to the stereo line inputs at the back of the Firewire Solo).

Make sure all the input/output levels match up, that nothing is coming in too loud and clipping, or coming in too quiet. This is much easier if you've used S/P DIF - there are no levels to adjust for that link.

In your PC software, treat it like a keyboard input - don't have any effects at all. You might later add small amounts of reverb and EQ.

Once the clean sound is working, get the sound you want by fiddling with the GT-6. Since you don't have a real amp/speaker, turn on the simulations in the GT-6.

Don't use the GT-6. Plug your guitar straight into the "guitar" input on your audio interface. Again, make sure the clean sound is good before trying any distortion. Now you will need software to make it sound good. The software you've mentioned all does what you need: Amplitube, iZotope, Guitar Rig. They simulate the pedals, amp and speaker.

But now you're asking: which is better? Can I mix the two?

(2) has the advantage that you can use the GT-6 sounds and user interface you've got used to. You can use the expression pedal, switch effects mid-song with pedals, etc. It puts less of a load on the computer, since the computer isn't doing the effects work.

(3) has the advantage that you can tweak effects after recording. Most recording software records the unprocessed sound card input, and applies the effects during playback. That means you can change everything about the amp simulation etc. any time after the recording. But it means that the computer is working harder - that sometimes becomes an issue with multiple tracks, where things lag or even can't play at all because the computer can't keep up.

A hybrid approach is possible - in which the GT-6 does some of the FX work, and the computer does some more. But think carefully about this because applying effects in the wrong order can give unwanted results. Think of the order things happen in a traditional pedals + amp setup, and concentrate on simulating that at first. So for example, you could turn off amp/cab simulation in your GT-6, but still use it for flanging/delay/chorus, while letting the PC simulate the amp/cab.

Now, with all the technology sorted out - how do you get your "great metal sound"? That's a separate question; there's no single recipe. Try using the presets in your GT-6 or your software as a starting point. Study which effects they use, in which order; tweak and experiment. Your playing style also affects tone.

It looks like you're doing everything right from what you've said. I don't know what you're expecting and what sounds crappy so some elaboration on that might help.

Remember, and this is important, you are not plugged from your effects pedal into an amp that will color the sound. The PC is almost completely neutral, so the tone will be lifeless unless you add lots of stuff back in. That's kind of why Line 6 and other companies who do amp modeling exist: To make software that emulates how an amp would color the sound.

Other things that might affect the sound, and I'm just guessing now, are a mismatch in gain between your line out and the PC input. Look at the input level meters in Audacity to see where you are with that.

Finally, cut the effects pedal out to see what your clean sound is like. If it's crappy too then you are almost certainly expecting a sound like that your amp provides from a PC whose goal is not to change the sound. If that's the case, you can test it by finding an amp modeling VST that you can plug into Audacity. Check here for some samples (I can't vouch for the quality of these plugins -- I'm just saying it's a start in finding out what you aren't liking about your tone).

The answer will really depend on what you think a crappy guitar sound is. I've never used your particular effects unit but I have used plenty of others like it, so perhaps the following will help...

Usually what I do in any given situation is to remove as much as possible from the signal chain to make sure that the clean and un-effected sound of any instrument is getting to the recorder (in this case, a computer). After that, add the effects back but remove all the effects but one from the patch.

In your case, I would switch in just the distortion first, then maybe some EQ and/or a cab emulator to get the sound you were after. After that, start with some light ambiance (like reverb or delay), until is is just barely noticeable but gives the sound a little "life."

Again, I am not sure what you are really after but these are basic ideas that will be useful in almost any situation.

What is your sound like through a normal amp? If it is good, and you like the distortion then the difference is the amp, which as Steve said, you don't get when you run straight into a PC.

You could have a look at Guitar Rig - which offers effects and a range of amp simulators - so you can hook your guitar straight into the PC. This is useful if you just plan on recording directly.

The ideal scenario if you are planning on recording albums etc is to hook the guitar straight into your DAW (Cubase, Sonar etc) and run effects in the effects loop in the DAW itself. These can be VST plugins or external effects, but this allows you to redo your effects at any time after recording, eg to add a little echo, or use a different distortion.

Additionally, have a look at some of the questions here comparing tube overdrive, fuzz and distortion.

I've been using the GT6 for a while.

You just have to screw with it really. It can do a lot of cool stuff. There are a few metal pre-sets already on there. Just start with them and start tweaking them a bit.

There is a patch site that allows you to change some of your GT 6 pre-sets as well, I think.

You can get some use out of a bad guitar sound by applying a flanger and a little bit of chorus or reverb (makes it sound more like a bad room than a bad instrument). The flanger (or an envelope-filter) can add back (or rather re-enhance the de-natured) dynamics that the real thing (guitar+amp+room+ears) provides.

The 'g' is soft like in the English name George. The flanger simulates the effect one would get by wiggling your finger against the flange head on a reel-to-reel tape deck (hard to get your fingers inside a walkman unless you bust open the cassette). It sounds similar to the effect of a phaser (it fattens the tone) but without the sweeps; and a flanger destabilizes the pitch somewhat (adds some wobble, but not wibble-wobble if you know what I mean, unless it's an auto-flanger).

2
How to connect bass to windows box and record the session?
3
How to record my guitar on my computer

6
Recording an electric guitar and electric bass
3
Recording Black Metal
0
Is it safe to plug guitar processor output directly into laptops's 3.5 mm slot?
3
Uneven volume of guitar strings when plugged in
0
How to listen to spotify & record instrument with Lexicon Alpha?
3
USB sound card's microphone does not pick up anything from amplifier
1
USB interface recording, adjust phone monitor volume in BOSS ME 25
3
Trying to use USB guitar cord in Windows 7