Does anyone know if this is notated properly, or how to properly notate this rhythm?

I wrote this little melody/riff here: 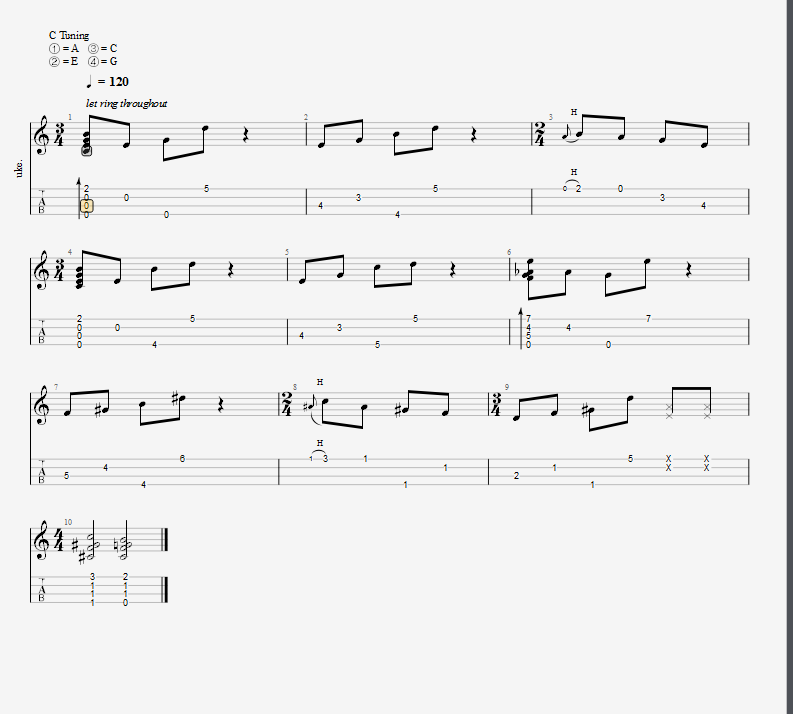 And while it sounds correct, I'm not sure if it's notated properly, with the correct time signatures and all. Could both the first 3/4 bars and the 2/4 bar be condensed into a 4/4 somehow, or how does all that work?

It looks fine to me. It would also fit into 4/4 but the main difference is where the accents fall. Usually, you want the downbeat to be the strongest beat in the measure. Combining the first line into two 4/4 bars would mean that the second beat of your current 2/4 bar would become a downbeat. If that doesn't seem right to you, I would keep it the way you have it. It's hard to say for sure without hearing it in the context of a piece of music, but I think it is fine the way it is.

Also, I'm not familiar with ukulele so I might be mistaken, but it looks like you have a notation error on the last chord. Outside of a few wacky 20th century composers, sharps and flats carry through the measure -- you have a C# repeated in the score while it looks like the tab says to play a C natural. Sorry if I'm off-base here.

Bar 7 is an F minor seventh triad, and should be written with flats (F-A♭-C-E♭). Most of the time, that A♯ note in bar 8 should be a B♭. Bar 8's G♯ should be an A♭, in my opinion. Same in Bar 9 to make the D diminished triad. Bar 10 has that weird chord. What is that? It's fine, but generally that would use D♭ as the root (D♭ diminished?)?. Rhythmwise, it looks good to me!

You said it switches key at the end. In the sheet music, this should probably be notated in the key signature. Sounds good!

Not the answer you're looking for? Browse other questions tagged rhythm jazz time-signatures ukulele or ask your own question.

2
How do I develop a structured way of thinking?
8
How to differentiate between 12/8 vs 6/8 timing (or hemiola)
7
If the time signature changes, does the key signature change as well?
1
Advice for figuring out unusual rhythms when composing
7
Alternative or more advanced methods for counting rhythms
1
How to rewrite this rhythm from common time to 12/8 time?
4
How does Rainbow's End by Peter Weniger work?
5
How does an apparent 4/4 arise from 2 totally unrelated time signatures?
2
How to create rhythm parts on piano?
3
Time Signature Dilemma, should I change the time signature for my Scherzo?