Is there a simplified version of music theory / notation for Western music?

So far as I understand it, Western music uses a 12-note chromatic scale from octave to octave, and modern instruments use even temperament.

Other cultures have smaller intervals, meaning a different idea of musical scale, and just intonation means in some keys the note blow a D is a C#, sometimes it's a Db- and in fact the two aren't (in theory) the same pitch.

On a keyboard, to play (for example) a C# of a given octave, there is just one key for that note.

Is there a naming system which uses just one name for any note (pitch) ? If so, what's it called ?

I'm thinking of something that has just 12 note names and something to indicate an octave.

And lastly (optional): If not, why not? this isn't really me provoking response .. it might be that there's a very practical reason why there isn't such a language, but I'd like to cast aside "because we've always done it that way" as a reason. Unless it iactually is the only reason.

Is there a naming system which uses just one name for any note (pitch) ? If so, what's it called ? I'm thinking of something that has just 12 note names and something to indicate an octave.

I think I asked a similar question here....

What is the most common way to refer to a particular note in the chromatic scale without making any implications as regards tonality?

And although there are some good replies there, I think the basic answer is : no, there isn't any recognised, general way to do this. Perhaps MIDI note numbers satisfy some of your criteria, but... they're MIDI note numbers.

And lastly (optional): If not, why not? this isn't really me provoking response .. it might be that there's a very practical reason why there isn't such a language, but I'd like to cast aside "because we've always done it that way" as a reason. Unless it actually is the only reason.

Again.... I rather think it is the only reason! I think Michael Curtis' last paragraph expresses this quite well; I get the impression that the chromatic scale in traditional western music theory is often seen as somewhat of a container for the range of diatonic possibilities, rather than as an 'essential' or 'parent' scale.

From a personal perspective, I do often find diatonic language, terminology, and notation a little uninspiring as a perspective from which to view music that clearly ventures outside the possibilities of a single key, although that isn't to say that it isn't a valid perspective, or that countless musicians haven't made it work for them over the years.

Don't think there is - now. Back in the day, F# was F#, but the way we look at music notes now, there has to be an F# and a Gb, and in 12edo, as you say, they sound the same. However, they do need different names in different circumstances. Some guitarists appear to be attempting to eschew flats, but luckily it hasn't (and probably won't) filter into other instruments...

EDIT - there's also the written aspect of music. We are programmed in a lot of cases, to expect certain things. For instance, in a piece in D major, I wouldn't (ever, or rarely) expect to see G♭ written. F♯ makes a load more sense.

It has individual labels for all the 12 chromatic pitches. Depending on the system variant there can be an identifier for the octave.

The common, moveable-do system has 7 syllables. In C major"

In the chromatic system notice that the syllables are variants of the 7 basic syllables in that they start with the same letter. So D natural, D sharp, and D flat all use a syllable starting with letter "R," respectively "re", "ri", and "ra."

The chromatic system also has enharmonic equivalents so C# = Db in solfege is "di" = "ra" like this...

Why do these systems seem based on 7 pitches if western music has a 12 pitch chromatic scale?

Because western tonality is essentially diatonic (7 pitches) with chromatic inflection.

There is a long history of western music developing increasingly chromatic harmony. Tuning methods developed as well until we have the standard equal temperament of today where the octave is divided into 12 equally spaced half steps. But while western music developed this rich chromatic system, don't overlook the fact that it is based on a diatonic foundation. Notation and naming systems reflect that.

Edit after a deeper dive into the inter-tubes :-)

...The idea was to find or develop a notation based on the chromatic scale, to exist alongside the old diatonic music notation which is based on the medieval church modes and which represents the C-major scale. 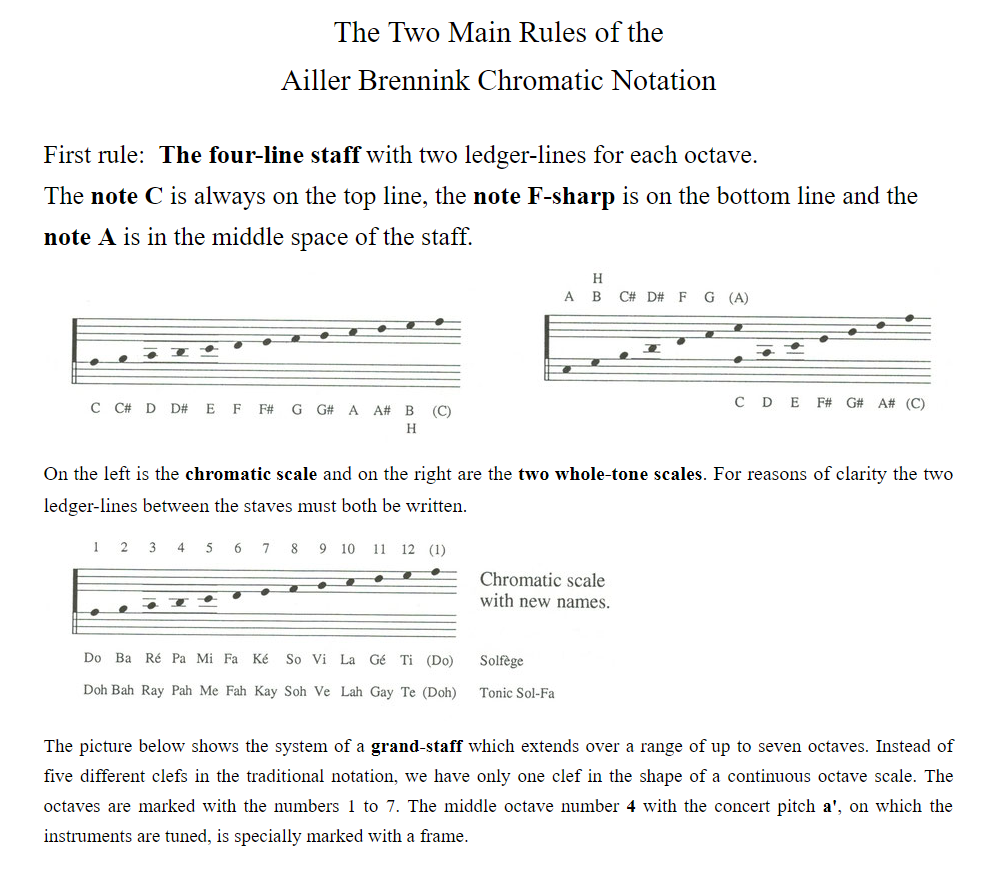 This seems to fit the OP's question:

While the system isn't commonly used, the web site provides some example of Stravinsky and Bach in tradition and AB Chromatic Music Notation.

The only system I can think of that might work as a one name for each note would be to refer to each pitch by it's actual frequency, but I've only heard that being done in reference to tuning up as in " this piano needs to be tuned to concert A 440. In applying a system using the pitch frequency, a piano player would need to memorize 88 different pitch frequencies. Add to that, figuring out intervals and how to build chords would involve a lot more math than the average musician might ever want to think about, but it might give other math minded players another avenue to explore in the pursuit of understanding what are the causes and effects we hear when we play music.

Not the answer you're looking for? Browse other questions tagged notation intonation chromatic or ask your own question.

11
What is the most common way to refer to a particular note in the chromatic scale without making any implications as regards tonality?

5
Alternative Numerical Representation of Pitch
5
Does an implied tie exist
29
Is there a Relative Pitch Clef?
6
Simplified notation for two-note tremolo
2
Lilypond chord mode not rendering minor modifier in alternate chord
8
What do you call a scale with 19 notes per octave? Howabout 17 notes per octave?
10
Why does this tonal scale from 1737 have both F and E♯?
5
Can accidentals be seen as a temporary change in scale?
2
Notation for Equal Division of an Interval?