I just starting to practice piano jazz fundamentals. I've been playing scales (root to seventh, or root to ninth) over ii-V-I (Evans forms) in all keys.

That practice is coming along just fine, but what bothers me is the improv transcripts I see for the great pianists don't seem to show scale based improv. To me it looks like broken chords with passing notes and embellishing turn are the real material of improv. At least the vast bulk of linear improv.

Below is a page from a transcript (https://ethaniverson.com/reds-bells/) that I think illustrates my point.

But the rest of the transcript seems chord-based. Bars 142-153 are a good example. That type of line seems the norm.

Can someone point me to some scale-based piano examples, or maybe help me understand scale v. chord melody in jazz and how I should think about my practice routine?

One thing I believe the scale drills has done is get my ear better tuned to jazz harmony. I can hear when I hit a flat sixth when it should have been natural, etc. Also, I get the idea that scales will get my hand coordinated for fluid movement between scale and chord melody elements. Suffice to say I am not looking for a way to get out of practicing scales. I just want to put it in context for how to apply it. 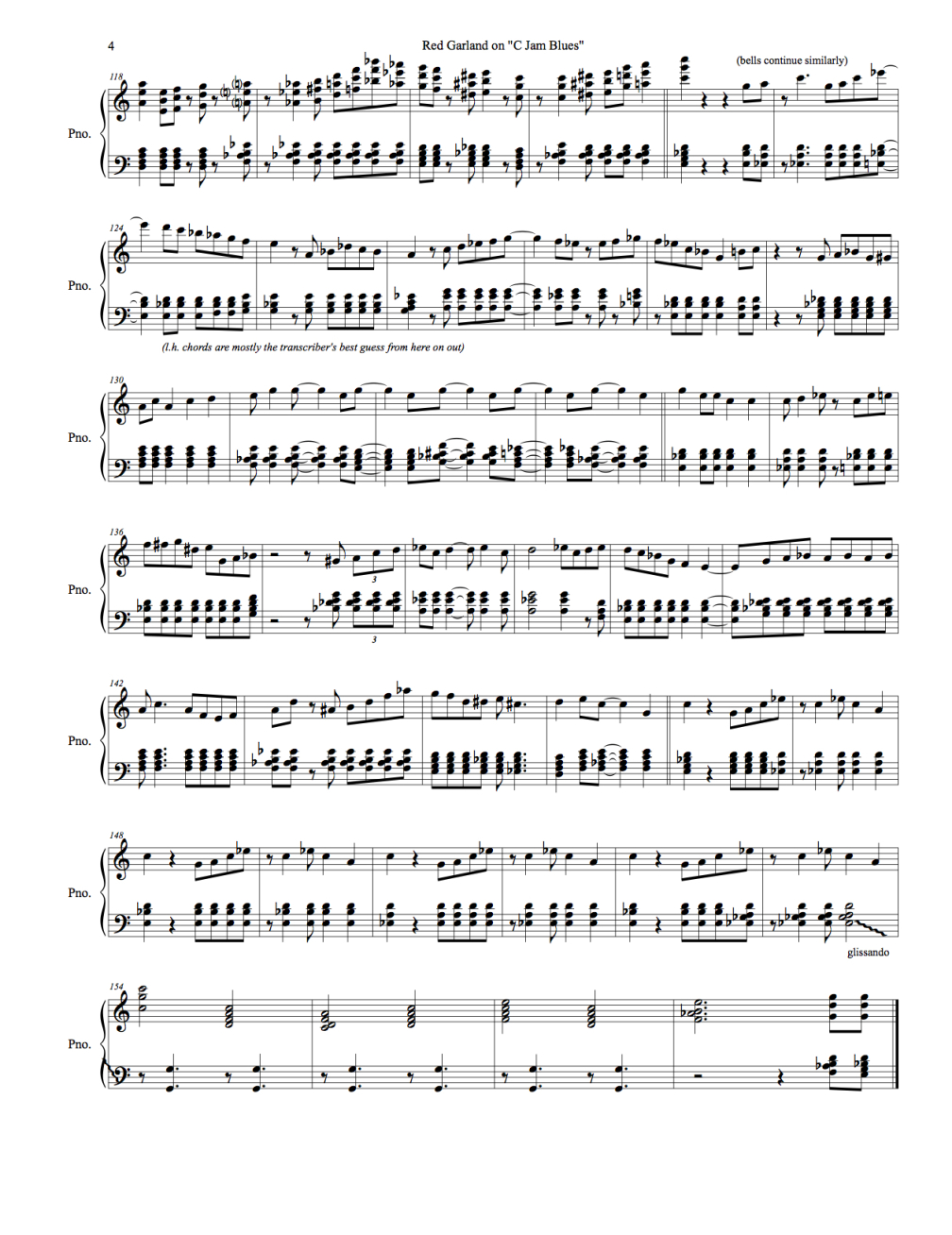 I think your answer might be in your analysis. This is, I don't think that classic jazz musicians (like Red Garland) thought about scales in the way we do. Even in the scale passage you highlighted, he is using the scales to connect chord tones.

Today's trend in jazz education is to focus a lot on scales, but this seems to be pretty recent. I think it can be linked to the rise of the Jamey Aebersold method. He started producing his play-a-longs in the 1970s, and each one contains a primer on "chord/scales." This series is still being produced and is probably the most popular jazz teaching aid in the world, and many of today's jazz artists learned using Aebersold books.

That being said, it wasn't how older jazz musicians conceived of their music. I have a Jimmy Dorsey saxophone method book (published in the 40s) with a small section on improvisation. It's basically a page of triadic arpeggios and broken scales and another page of short etudes (which are based on triadic arpeggios and broken scales). You can find some statements from Dizzy Gillespie, and he's always talking about chord extensions or super-imposing chords over other chords (e.g. tritone subs). Nothing about scales or modes anywhere...

Laurence is right about pointing to Chick Corea's later work because scalar improv has become much more popular over the years. Remember that Miles Davis' "Kind of Blue" album from 1959 was considered revolutionary because the musicians were focusing on modes instead of chords. On that album (and the modal jazz genre that came after) the idea was to play one chord for a long time and stay in that mode, but they weren't playing modally over bebop tunes; they weren't thinking about switching modes every measure or so, which is how Aebersold presents modes.

So, I think the important part is to understand that, older jazz styles are based off chords, so if you apply a scalar approach you probably won't sound authentic to the that style ... I'm not saying it's incorrect, but you will sound more like Chick Corea than Red Garland.

Any of Chick Corea's later stuff.

He started playing melodic jazz, then fell heavily for the scale/mode thing. Pity, in my opinion.

Not the answer you're looking for? Browse other questions tagged scales practice jazz or ask your own question.