For intervals, is three semitones major or minor?

It should be a pretty simple question, but under a bit of exam stress I have forgotten.

As the title says, is three semitones a major or minor interval?

Neither, 3 semi-tones is an augmented second.

It could also be a minor third.

I'm being a bit sarcastic, because the question was asked for a exam.

Intervals can be measured in semi-tones (or half steps.)

But, intervals are named by: first a number and second a quality.

The number is based on the count between notes of the musical pitch letters. A to C is a third. 1 for starting at A + the 2 steps up to C = 3, so it's would be a third... of some quality.

Determining the quality is a bit more complicated. Adding sharps or flats change the size of the interval in semi-tones. The basic interval number and size in semi-tones determines the quality. Several detailed charts are online at Wikipedia:

Three semitones, if it is a generic interval of a third, is a minor third. It could also be some other ugly enharmonic interval, like a triply-augmented unison.

Major and minor are measured in intervals not tones so this can be hard to describe properly.

Giving it a 3rd note, another 3 semitone above Eb would give C, Eb, Gb is a Diminished sound.

As you can see, there are equivalents for these semitones. We know that 3 semitones from C going up can be:

These are all the same note, and sound the same but at different intervals.

Is three semitones major or minor?

If this really is a real exam question, the question is asking specifically for Minor or Major and not: perfect, augmented or diminished.

To clear up for the 2 down votes and phoog's comment:

Ignoring intervals and focusing on sound alone, what do you hear? Visualise it on a keyboard: 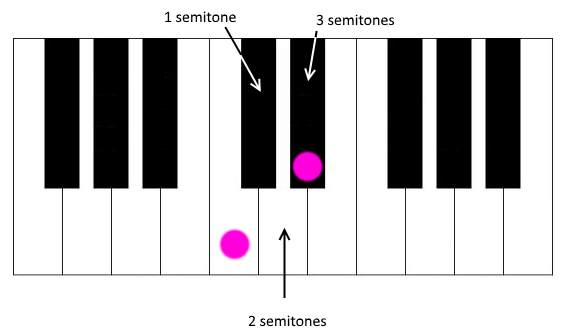 If one was to play these two notes on a piano what would you hear? The answer would be "It sounds minor" then I tell you that you were wrong because it's actually augmented (or diminished). You would then argue "Why, it doesn't sound augmented or diminished".

Tones describes sound and intervals describe measurement. D#, Eb and Fbb all sound the same: C-D#, C-Eb and C-Fbb would all sound minor as a pair even though C-D# is an augmented 2nd and C-Fbb is a doubly diminished 4th.

To phoog's comment. Obviously yes, F# to A is always a minor 3rd, but 3 semitones above F# could be an augmented 2nd (G##) or a doubly diminished 4th (Bbb) which could form as part of a different chord (a major, augmented or diminished chord: C, Eb, G = C minor but Ab, C, Eb is Ab Major yet C, Eb, Gb is Diminished. Without intervals, it's too ambiguous to know what interval is used based on sound alone).

2
Multiply-diminished intervals from a major
3
Why are there major and minor intervals?
5
How to correctly invert non-compound greater-than-octave intervals?
4
Defining intervals.
7
Are intervals like major 3rd, minor 3rd, and major 2nd all based on the scales, or are they based on how many semitones they have?
6
Confused about intervals and keys, does the former depends on the latter?
0
Is a doubly augmented seventh a compound interval?
6
Why is the interval between G and F in C Major a minor 7th?
2
Learning minor scale notes on guitar