I’m reading the jazz piano book and I can’t see how the upper c flat note has a place in the C7+9 chord.

Or am I wrong?

Pretty poor writing! If the dots had stems, it would be more clear, as that top note actually belongs to the bass clef, making it Eb. Even though it could be construed as looking like it's part of the treble clef, which would make it Cb, and utter rubbish!

But that's still wrong! C7+9 has an augmented 9th note. That's D#, not Eb, even though it's enharmonic.

The note written is Eb not Cb. You're right about the spelling, D# would be preferable.

If the note were Cb, the notation would look more like this: 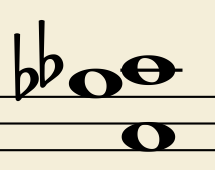 Which answere the question. But we might as well also answer the question some people THOUGHT you asked: 'Why spell a #9 note as a flattened note?'

I'd reverse that to 'Why do theorists insist in calling a 'b10' a '#9'?' We hear it as a 'blue' flattened third on top of a dominant 7th shape chord. They allow other exceptions to the 'every chord must be analysed as a pile of thirds' rule. But there it is. Levine has used the 'correct' chord symbol, but has notated what he hears.

Not the answer you're looking for? Browse other questions tagged theory chord-theory jazz or ask your own question.

3
Is this a Csus4 chord?
4
Why is the diminished scale 'artificial'?
10
Are flat 6ths ever used?
17
Why does a minor sixth chord contain a major 6th interval?
3
Half-diminished pentatonic scale?
1
Jazz transcripts or recordings that clearly show scale-based improvisation for piano
6
Are modes in jazz primarily a melody thing?
7
Why does E7 sharp 9 have a G?
3
Chord naming: "seventh flat ninth *piano* chord"
3
Jazz piano, chords: planning ahead