Here is a photo that shows different ways of connecting your keyboard to Ableton Live. 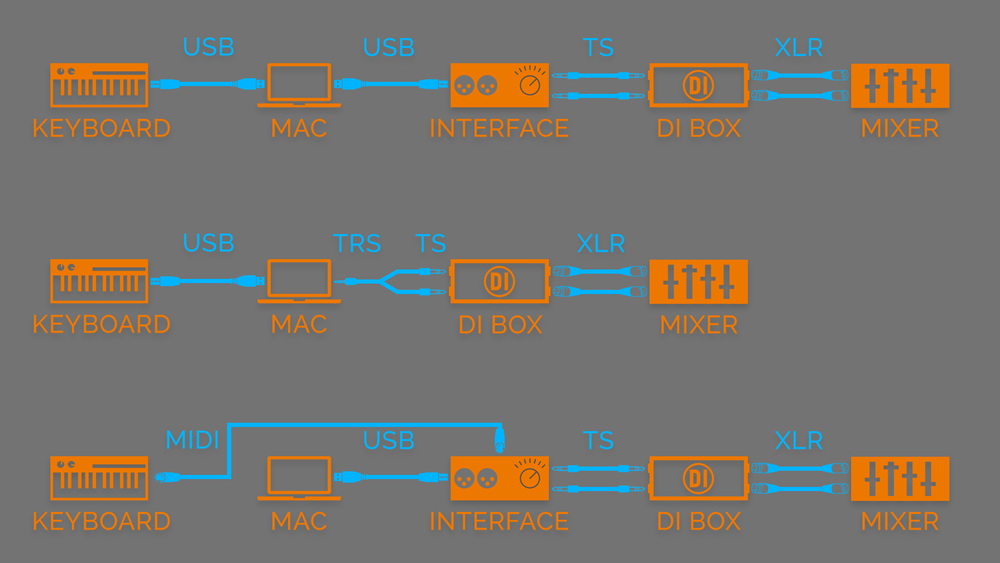 For example, if I'm looking to connect my keyboard (Roland FA08) to my laptop and have the output come out of my studio speakers, do I need an audio interface? My keyboard has an USB cord (NOT THE USB MIDI interface cord) that connects from the keyboard to the computer.

This is too much for a comment, but can't be a full answer without knowing the OP's actual use-case.

It rather depends on what you think you are going to be listening to.

Neither USB or MIDI from your keyboard will transmit sound. They will both, in fact, transmit only MIDI data [just by different routes] to the computer.

The computer will then have to have some type of DAW, midi recorder plus some type of 'sound module', VST instrument etc to make any sense of the incoming note data.

That 'sound module' then needs to play that sound out to somewhere you can hear it. That will be either headphones, or a more sophisticated audio converter/mixer/amp/speaker structure.

Given the diagram you've shown;

The first line shows a keyboard connected to a Mac using USB (this is fine, and the current way of doing it). The Mac then connects to the interface using USB (again, fine). The diagram then shows the interface going through a DI box to connect to the mixer. If you're playing on stage, and you're quite a distance from the mixer, this is how you'd do it. In a bedroom scenario, you don't need the DI box; just take your two TS cables from the interface, and put them straight into the mixer.

One caveat on this solution; do NOT have the keyboard and interface going into the same USB hub if it's unpowered. You'll probably overload it, and strange things will happen. Use a powered hub, or just two separate USB ports on the Mac.

The second line you've shown will work, but by taking away the Interface, you're relying on the Mac to produce the actual sounds. The Mac sound card isn't the greatest, and it adds extra load on the CPU. However, because you don't need the DI Box in a bedroom, you're looking at the lowest cost solution.

The last line is the solution if you have an older keyboard which only has the five-pin DIN plugs for MIDI. Your Mac won't have these connections, so you absolutely need the Interface (most interfaces have the five-pin connections as well as USB). Again - the DI Box is only needed if you're playing on a stage.

For all practical purposes, none. You can connect to outboard hardware using either USB or MIDI provided that the hardware supports MIDI over USB. Most modern hardware does so natively.

For example, if I'm looking to connect my keyboard (Roland FA08) to my laptop and have the output come out of my studio speakers, do I need an audio interface?

Yes. Audio and MIDI are not the same thing. Audio provides the sound from your FA08, MIDI provides the control (what notes to play). If you want to hear your FA08 from the computer, you need to connect the audio outs from the FA08 to a pair of audio ins on you computer. Most computers have an input already built in, but you'll need an adapter since the computer IN is most likely stereo minijack and the audio out from the FA08 is dual 1/4 jacks.

If you want to control the FA08 from your computer, you need MIDI. MIDI is how your DAW tells the FA08 what notes to play (among other things).

See above, practically either way is fine.

If I wanted to use my synth to control things (like the virtual instruments) in Ableton, then I would make sure I have the synth in midi/controller mode, and use the USB connection. If I wanted to record the synth's own sounds, then I would use the audio outs through the interface. As stated earlier, DI box isn't necessary.

Not the answer you're looking for? Browse other questions tagged midi-controller-keyboard ableton-live or ask your own question.

1
Connecting midi keyboard to pc
1
Electronic drums, Ableton, Addictive Drums + additional audio source from laptop
1
Synchronizing Live via MIDI
0
Midi and interface connectivity question
2
I can't change bank preset in my keyboard via Ableton
3
MIDI routing (?) in Ableton freezes after a few seconds... any ideas?
1
Connecting Roland drums to Ableton Live
7
Why does my midi device have a long delay (cool-down period) between consecutive key presses?
1
Will what I send in on MIDI In come out through (MIDI over) USB?