I was studying a blues song (Bessie's Blues) in all keys and I seem unable to understand something that seems quite basic.

So, in the typical progression for a Bb organ we have C7-F7-C7-C7-F7-F7 etc. We are in the key of C so all is natural except B in C7 and E in F7 which are flatted since they are mixolydian mode.

Things get worse if we transpose it to E7-A7-E7-E7-A7-A7 etc. since the bigger the number of sharps and flats the more the complications with the signature.

I'm fairly new to this so it's a bit of a struggle to express myself coherently.

Thank you in advance!

This really about jazz harmony and chord symbols versus staff and key signatures.

There are many online charts and guides about reading jazz chord symbols.

Of course the issue is how to know the specific quality of the numbered intervals like 7, 9, 6, 5, etc.. Are they major, minor, or diminished?

Other that just memorizing a jazz chord chart a rule of thumb that seems to work is consider the chord as built on a dominant with all the chord tones being diatonic. All the added chord symbols are relative to this basic dominant chord.

If the symbol is C7, consider that a C dominant seventh chord where the 7th is minor (in terms of key it would be in F major using a B flat.) C9 would be a C dominant ninth chord with a diatonic, major 9th (in the key of F major the 9th above C would be a D natural.)

To illustrate this point imagine a lead sheet with a melody notated in C major and the chord symbol E9 was used. Rather than being an E minor 7th ♭9 (E,G,B,D,F all naturals), that should be an E dominant ninth chord where in terms of key it would be the dominant of A major (E,G#,B,D,F#.) It could also be considered a ninth chord built on the tonic of E mixolydian, but I don't think that makes it easier to understand. We have to do some mental juggling to keep track of the chord and interval qualities and accidentals for different keys.

If you practice in all keys, eventually the intervals of a dominant will 'sink in.' But a quick list might help. Let's switch to a G dominant (the key would be C major.)

All the additional chord symbols are from that diatonic dominant chord reference point.

If the base triad is not major but minor, a symbol is added: Gmin or Gm or G-.

If the seventh is not minor but major, a symbol is added: Gmaj7 or G∆7

Continue from the this diatonic dominant chord for other intervals.

The 5th is normally perfect so b5 is added for a diminished 5th: G7b5.

does the key signature define which notes are sharpened/flattened or the chord in each separate meter?

For example, here is a lead sheet for "Billie's Bounce" by Charlie Parker 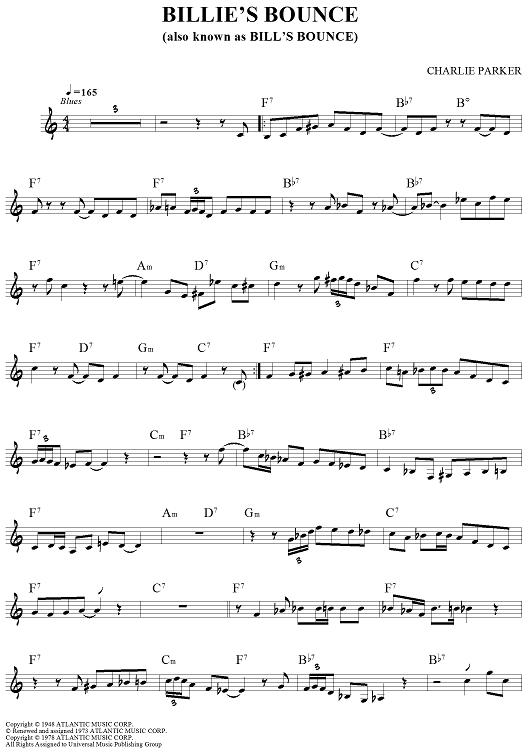 Look at the 3rd measure of the 2nd line - the first note is an A, even though the chord symbol is Bb7 (which contains Ab). When playing this tune, you will play the note A during the melody, but the rhythm section will play the Bb7 chord (which has an Ab). During solos, you will treat the chord like any other Bb7 chord.

We are in the key of C so all is natural except B in C7 and E in F7 which are flatted since they are mixolydian mode.

Actually, if someone wanted to notate a melody in C-mixolydian mode, there should be a key signature of one flat (b-flat).

The real reason these notes are flatted is that the 7 chord symbol denotes a chord in the form of a dominant seventh, comprising a root, a major third, a perfect fifth, and a minor seventh.

To denote a chord with a major seventh on top (i.e., like the ones in the question but with b-natural and e-natural instead, called a major seventh chord), one uses maj7, as in Cmaj7 or Fmaj7.

As noted correctly by the other answers, the key signature does not affect the chord symbols.

1
Complex chords: does the construction depend on scale degree?

29
How many (major and minor) keys are there? Why?
4
Chord progressions and key
8
Does the existence of a chord tone (and its enharmonic spellings) imply the absence of another?
17
Which key signature to pick for this chord progression?
2
Chord progressions and rules
1
Why does this harmony work?
16
Why are accidentals not additive?
1
Learning a new piece -- tips to make sure to get all the notes accurately from the start (piano)
3
Using intervals to count chord occurrences