I am currently analyzing a bit of music for homework which consists of four voices (string quartet).

It is in the key of G Major, but the chord that it ends on, is a Ab on the cello, B on the Viola, and G on both violins.

So that chord is Ab B G, does anyone know how I would figure this in a roman numeral analysis?

Here is the score 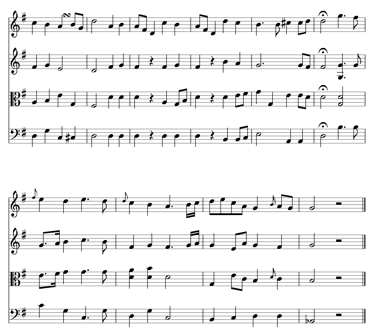 The Ab in the cello part in the final chord of the music you posted is almost certainly a typo. The entirety of the piece aside from that is written with typical common practice harmonies that you would expect to see in a theory class.

The only context I would expect to see the music played as written would be a mistake on the part of the cello player or typesetter, or a bizarre piece of performance art that exists to make the audience cringe when the cello plays the last note. IIbmMaj7 chords do not exist in Theory 101, and when you see that combination of notes in a theory class, you're not going to be calling it a IIbmMaj7 chord anyway (you'll be calling it a 0-1-4 pitch class set).

It's supposed to be a G natural in the cello part, making the final chord a perfect authentic cadence on the I chord.

When identifying a chord, I normally follow these four steps. Here, I have them written out with the specific steps for the chord listed in the question.

So, our end result is IIbm(maj7)

Not the answer you're looking for? Browse other questions tagged theory chords harmony analysis roman-numerals or ask your own question.

2
Roman Numeral Analysis of Chords Outside Of The Key: C7 in the key of E major
12
Harmonic analysis of the B section of “Have You Met Miss Jones”
6
Are these “power chords” in a classical composition?
0
Interval analysis, augmented 5th or a 6th?
0
Am I right in that it is a diminished triad without the third?
2
Arranging K 545 for a string quartet, how to write the harmony part
3
Minor Key (and other key?) Roman Numeral Analysis
2
What is the correct Roman numeral notation for use in modal pieces?
0
(REVISED): Roman Numeral Analysis of Fuchs- 'Mother Tells a Story'