I have a B-52 AT-100 all-tube amplifier head. I currently have it connected to a LINE-6 Spider 412 four-speaker cabinet. In order to really drive the tubes, I have a vintage Scholz Power Soak, which is a bunch of resistors that allow the user to step down the volume output while still running the head at maximum volume. 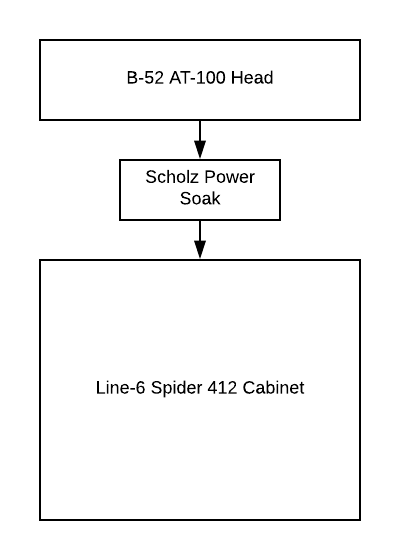 The quietest setting on the Power Soak is -32Db, which allows for playing at a reasonable volume while still driving the tubes at max power.

While the -32Db setting on the Power Soak is labeled "PHONES," presumably indicating that it's possible to drive headphones instead of a cabinet.

However, it's still really a lot of power output, I still have to turn down the main volume to about 30% in order to play it in my house. Without the Power Soak, it's likely that I'd blow out the windows in a fifteen mile radius.

In interests of space, I'd like to get rid of the cabinet and simply take the output of the Power Soak and route to actual headphones or a recording hub. I'm not really ever playing stadiums, so the cab is a bit overkill. However, I really like the sound of the amp being driven through the Power Soak.

What are my options for getting rid of my cabinet in a way that would allow me to play with headphones? I could always buy another Power Soak and step things down even further, but as I'm trying to reduce physical space as much as possible, is there a better option?

The main purpose of the power soak is not to reduce the signal level, but to offer a reliable low impedance like a cabinet, even if none is connected. A tube power amp requires such an impedance, else it'll destroy itself.

With the power soak in place and set to -32 dB, it doesn't really matter anymore what you connect. You can as well step it down yet a bit further with a simple voltage divider. This can be built from ordinary resistors†, which you can buy for less than 1$.

You can also use a passive headphones splitter with volume control, that's the same as a voltage divider but with a dial.

Just, as I already commented, this doesn't really make any sense. Even the best tube amp does not sound “right” if it's not connected to a proper guitar cabinet (either real or simulated). Many power-soak-like devices have simple cabinet emulation built in for recording or headphones use. In that case, the headphones output also has an extra volume control.

If you want good sound, you'll need the cabinet. The usually more sensible alternative is to just go all-digital for practising.

†Basically, the power soak also consists only of simple resistors, but these need to be able to dissipate lots of power, which is the real engineering challenge.

Not the answer you're looking for? Browse other questions tagged amplifiers homerecording vacuum-tube or ask your own question.

6
Reduce a tube amp power or volume
3
Does an FX loop send have the same output volume as the input?
5
Incorporate guitar amp in my bass rig?
2
Potential Tube Amp Issue
1
Choosing speaker resistance and power handling for a 1W amp head
3
Chaining amplifiers together
2
Tube amplifier buzzing
2
Can I use headphones with tube guitar amplifier without headphone jack?
4
How can I overdrive my tube amp at low volume?
10
What is the value of having tube amp in guitar power amp?