The Cadd9 chord is played on the 3rd,2nd and 3rd fret of the A D and B string respectively.

What would be the resulting chord if I were to barre the first fret with my index finger?

Or for that matter, what would happen to any open chords that operate from fret 'n' and I barre fret 'n-1' where n is not equal to 1.

Is there any way of finding what resulting chords I get when I barre open chords that operate from the second fret onwards(like Dsus4,C5, etc) ?

And by "way of finding" I mean, how we determine that a Gmaj chord is just moving the Fmaj chord by a wholestep because F and G are one tone apart. 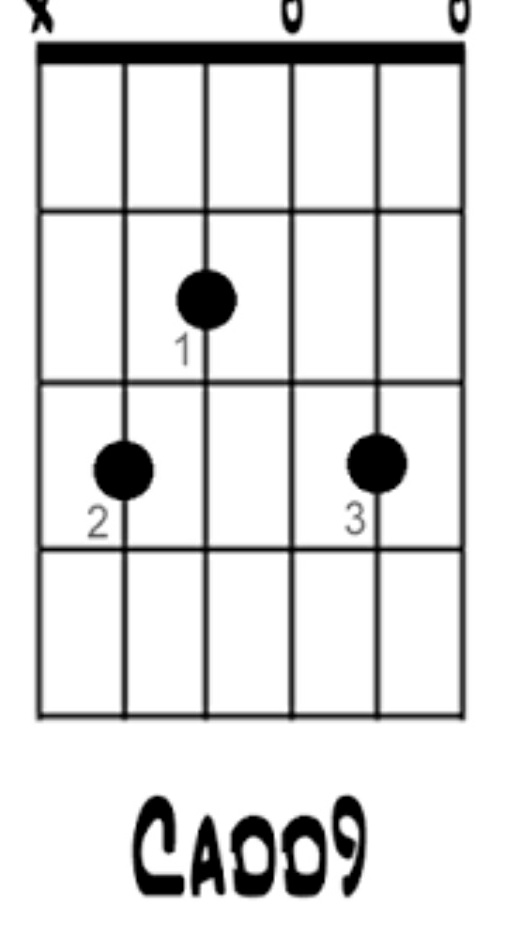 re-arrange the letters by thirds...

That give us Cadd9, no minor seventh so it's just an add9.

That chord is open so we can sort of think of it as barred at fret zero.

Next, barre the first fret and you get...

re-arrange the letters in thirds...

That gives us C#5add9add11 or maybe it should be C11#5add9. I would not spend time trying to give it a sensible label, because the barre was just arbitrarily added. That's not how functional chords are constructed. Is this really a 9th or 11th chord? Where is the dominant 7th then? Without the 7th we have to resort to using add labels. But do you really mean to construct a chord based on the ^1,^2,^3,^4 scale degrees then a #^5? This is more like non-tertial harmony or tone-clusters. You can do it if you want, but trying to figure out a label for the result doesn't make much sense. I don't mean to sound chiding, I just want to 'unpack' what's going on in the example.

Maybe if this chord was followed by sliding all the non-barre fingers up one fret the "chord" could be considered a type of suspension/retardation between a Cadd9 and a Dbadd9. If so, formally it should not be called a chord.

But I'm not sure I you meant to switch fingers 2,1,3 to 3,2,4 and move them up one fret to match the change of the barre from open (fret zero if you will) to fret 1. Personally, my hand can't make the stretch to do that, but it would be...

Notice I made the enharmonic change of G# to Ab.

Re-arrange the letters in thirds...

Notice that I came up with a Db root whereas @Tim came up with a C# root. Neither choice is right or wrong. Certainly guitar seems to "favor" keys with sharps so C# is a natural choice.

I chose Db because of the change of the E. If we sharp the C then we should sharp the E and get E#. Personally I think it's easier to read F natural. So I started by changing the pitch class - meaning the letters. So, E goes up to F and C goes up to a D that is a half step above which is Db. My root is Db.

Sorry if that's a bit long winded! But I thought it might be helpful to explain. When you get used to making enharmonic changes you kind of do all that stuff without much thinking.

But the important point is theoretically you could take any open chord shift the fingered tones up X frets and then barre at fret X to get a chord of the same quality but with the root shifted by X semi-tones. Some of the resulting chords may be impossible or difficult to play especially the ones based on open C, G, and D.

You need to identify all the played notes, then try to form a major or minor triad from them, if you can, initially.

Your last paragraph muddies things, as there, you mention wholesale moving of a complete shape, which is not what you describe earlier. If indeed that is what you meant, then moving Cadd9 up by a fret, and barre the 1st fret, then it's simply C#add9.

Enlightened by your comment, it's quite complicated, as with each shape, different strings will change notes when a barre is applied. Creating different notes in relation to the original chord/shape.

2
How to play non-beginner barre chords
5
Barre chord F and barre chords in general
15
Playing guitar with webbed fingers
2
Forcing a slide between different chord shapes
3
Barre chords, how to avoid or simplify?
3
Hendrix/John Lee Hooker style Blues trill technique?
2
It's really hard to press my acoustic guitar strings and I can't figure out why
11
Struggling to switch chords when fingerstyle / arpeggio
17
Fighting against the F Chord
1
getting started with solo acoustic gig