When, if ever, are arpeggiated six-four chords really "real"?

I've always been a little skeptical of the arpeggiated six-four—in the interests of full disclosure, I just plain don't think it even exists—and I'm unsure why we view some six-four chords as arpeggiated and others as just expanding a more stable inversion of the chord.

The above Beethoven example is almost invariably cited in textbooks as a perfect example of the arpeggiated six-four. Here, I've labeled these chords with asterisks below the staff.

But to me, the Beethoven example is hardly any different from the following Mozart example, and no one in their right mind would label every inversion of this Alberti bass:

Can anyone explain to me the logic here? If the Mozart example isn't an arpeggiated six-four, why is the Beethoven example? It can't be an issue of tempo or the rate of pitch change, because that doesn't matter in other aspects of tonal theory.

Yesterday, by coincidence, I was playing West End Blues from my Burkhart Analogy for Music Analysis and I labelled a 6/4 chord... 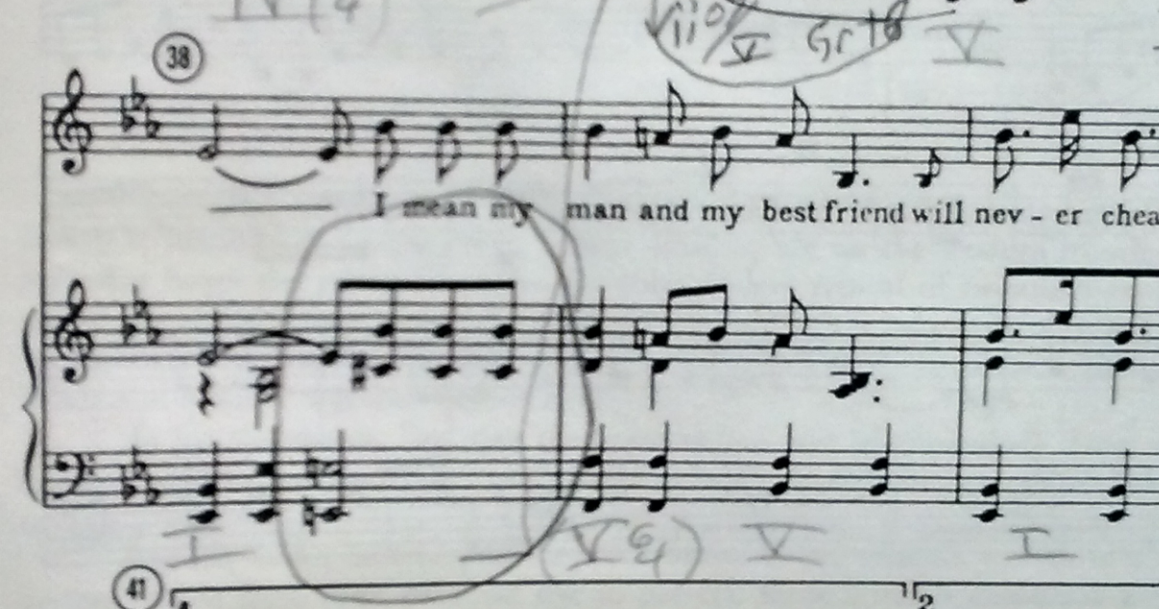 ...I put it in parenthesis which is my habit for these so-called arpeggiated inversions. It's my way of saying it's really just a V with a broken-chord/arpeggiated figuration producing the inversion rather than essential melodic motion. I suppose I could have put the parenthesis the other way V6/4 (V). It would not matter either way because either works just fine going to and from the tonic I. Does that make it a passing 6/4? If the chord 5th F moved directly by step to the next chord tone: yes. But an arpeggiation of the V chord intervenes. It's interesting that the F is on one beat one - emphasized - making it hard to explain away as the kind of florid figuration seen in many other examples.

I don't know if this will be a convincing case for arpeggiated 6/4's but it seemed like the right analysis to use for this case.

Sorry for the terrible photo. My phone is cheap!

Labeling the various inversions in the Beethoven example seems a bit pointless, because it starts on the chord root arpeggiates up and down the octave back to the root, then goes to the root of the dominant. It's just a big elaboration of the root. IMO just label it I V.

The West End Blues example is different as it emphasizes the 6/4 sonority and arpeggiates before moving to the next chord.

Excellent question. I agree with you that there is no substantial difference in the treatment of the 4th in these two examples. If I were labeling the chords (which is not the same as doing an in-depth musical analysis), I would mark both examples as root-position I until the dominant harmony comes; the points where the bass touches the 5th and 3rd are (as you say) simply elaborations of a more stable root-position chord.

The Beethoven example is beloved by textbook writers because it is a rare instance where the ear has time to pause on each inversion of the chord. But it is vastly outnumbered by examples where the bass voice touches on the 5th of the chord in an arpeggio or other florid figuration and only the lowest note of this figuration is heard as a harmonic bass.

Not the answer you're looking for? Browse other questions tagged theory chords chord-inversions or ask your own question.

0
Four-chord songs with more than four chords
0
Question on arpeggiated chords in bluegrass
2
How would you calculate the name of this C/A# 7th chord?
4
How should six-four chords be resolved?
2
Arpeggiated Chords with Partial Wavy Vertical Lines
7
Why are there particular "rules" for using triads in second inversion but not for using seventh chords in second inversion?
2
Unclassifiable second-inversion
3
Are inversions for making bass-lines nice and prolonging functions?
0
Roman numeral analysis of chord with non-chord tone in bass