How do I interpret two notes in a tempo marking? 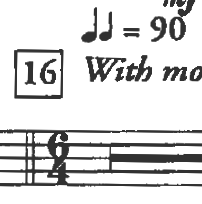 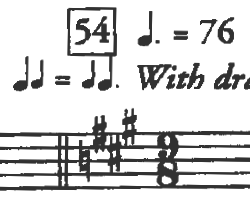 I know what tempo this is because of the marking next to the bar number, but what does the part below the number mean? 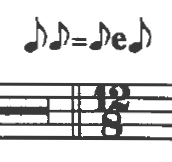 Is this saying to stay at the same tempo? What does the e mean?

Edit: In response to the questions, this is "Be Thou My Vision" by David R. Gillingham, published in 2000 by C. Alan Publications. The preview of the score gives the tempo at 16 as (single quarter note) = 90, so that answers my first question.

In reverse order because it seems easier to explain it that way:

The third one probably means that eight notes are to be played as swing eight notes. I.e. where there are two notes in one beat, they are played like a triplet with the first two notes tied, where the first note is twice as long as the second. "E" in Italian means "and" in English solfege. So if there are two eight notes in a beat, e.g. C-D, they are to be played C-and-D. This is done so it's easier to write the notes as plain quarter notes or pairs of eight notes, instead of using dotted quarter notes and triplets.

The second one, I'd have to see the whole score to confirm, but is probably something similar to the above. To simplify things, notes are written as plain quarter notes, but the actual time is quarter + dotted quarter notes.

Hopefully I didn't miss the mark by too much...

I'm only going to answer the second part of your question; I think MMazzon's explanation to the first part is great.

The [two quarter notes] = [quarter note plus dotted quarter] is simply saying that you need to keep the previous tempo of 3/4 (now feel the pulse in eighth notes) at 76 bpm but that there will be nine, rather than six, of those pulses.

Apparently the piece is fairly well-known. Have your figured these questions out now that you have performed it?

7
When transcribing a song and the speed doubles or halves, is it best to change the tempo and note values to reflect that or keep them the same?
2
Does the tempo marking on a piece refer to the bottom number (# of beats/measure)?
3
What is the meaning of "un poco" in "un poco adagio"?
1
Help With Tempo
2
Number appearing above two notes in tempo; how do I play/interpret this?
9
Why is Beethoven's tempo so off?
4
Ritenuto / Fermata / Tempo change
3
Question about tempo markings on timpani part
7
Is the tempo supposed to be denoted in the same units as the bottom number of the time signature?
5
What is the meaning of "M. M." in this tempo mark?