Borrowed chords - does their function change?

I have a theory question. In the key of C major (as an example) there are some common borrowed chords. Like: D, E and Fm. Sometimes B♭, A♭ and E♭ as well. A natural minor share the exact same notes as C major, though the progressions would likely differ to gravitate to the A. So if chords borrowed in C major from C minor are used in C major's relative minor - A minor - does their function change?

I'm looking at this from a technical / analytical perspective. When writing songs, obviously I'll just use what sounds good, whatever kind of modal interchange or what not is going on.

An interesting follow-up question is what borrowed chords are commonly usable for a song in a minor key, as that seems rarely mentioned anywhere when talks come up about borrowed chords.

For a song in C major, common examples are: D, E and Fm, and B♭, A♭ and E♭ as mentioned above.

What are common examples for say, A minor?

I'm not sure what your question is. Borrowed chords are borrowed from a given tonic's parallel mode/key. C major and C minor are parallel keys and borrow chords from each other.

But you bring in the idea of a relative key.

Normally from the key A minor you would borrow chords from its parallel key of A major.

But, your question is worded such that I think you ask: if chords borrowed in C major from C minor are used in C major's relative minor - A minor - does their function change?

I think you can simply answer "yes" because when any given tone - example G - is considered in two different keys its position in the scale changes and therefore its function changes. Again, with an example of G, in C major it is the dominant, but in A minor it is the subtonic. That is a change of function. The change did not happen from altering the pitch! The function changed, because the tonic changed, and that changed the position of tones in the scales.

But, let's look at the borrowed chords and how they would be identified in the relative minor. Keep in mind that with chord label capital letters mean major, lower case mean minor, the 'o' means diminished, and a flat prefix means the chord root is chromatically altered.

I hope I didn't misunderstand your question.

The explanation is a bit convoluted.

But, the simple answer is: yes the chords will change.

I'm adding some detail specifically about borrowing chords in a minor key from the parallel major.

A caveat: my conception of major/minor harmony comes from the rule of the octave and figured bass. That is the old teaching which was used by Handel, Bach, Haydn, Mozart, etc. etc. It is not the teaching in modern harmony textbooks. I believe the difference in the two methods becomes pronounced when looking at minor harmony. I won't go into the details contrasting the two methods, but only say that what follow is my conception of harmony as based on the older teaching. 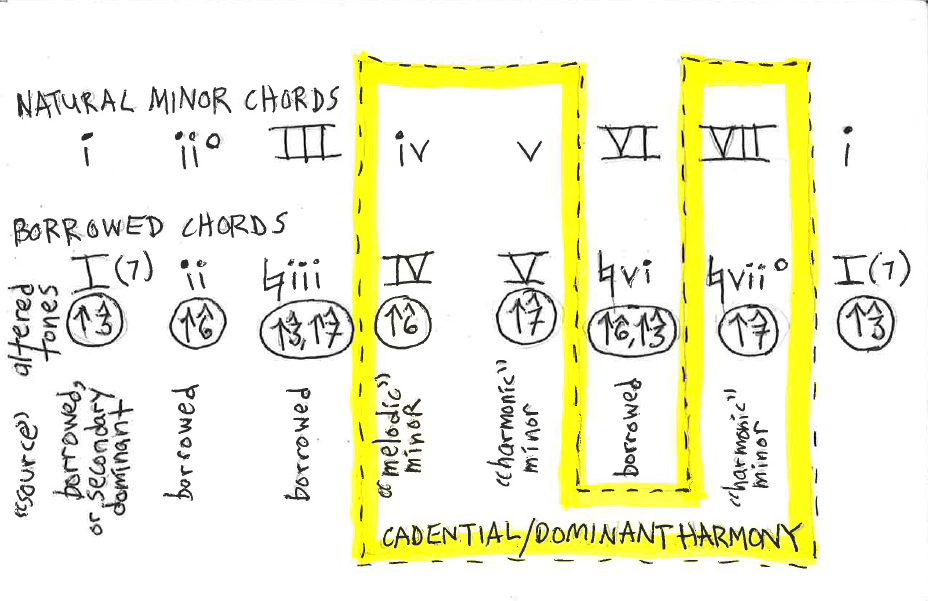 The first problem to deal with is the notion that there is only one chord type per scale degree in minor. From the perspective of figured bass this simply is wrong. In figured bass/rule of the octave the chord types are determined by the direction of bass movement! For some - but not all - people using a modern approach they say the set of chords in minor is derived from the "harmonic" minor scale, or the ascending form of "melodic" minor, or the "natural" minor. Those approaches will yield a single set of chords per scale degree. If the ascending/descending melodic minor is used, it may generate a chord set like the rule of the octave, but not necessarily. I used the natural minor as the basic chord set, because those are the diatonic chords resulting from the modern minor key signature. Sorry for such a tedious explanation of the chord set, but it matters when explaining how I identify the 'source' of the chords.

Below the natural minor chords, I list the chords which would be "borrowed" from the parallel major. The natural sign is used to show when the chord root is altered in the borrowing. In actuality other accidentals could be used depending on the key signature.

Below the borrowed chords I indicate which scale degrees are altered from the natural minor to produce the chord borrowed from parallel major.

I boxed in yellow the chords altered in minor to either create proper dominant chords with a raised ^7 leading tone, or for cadential harmony like IV6 V6 i. From the perspective of figured bass it is this harmonic reason that the ^6 and ^7 scale degrees are altered.

Now let's examine each chord with my comments about its 'source:'

A final thought: during the time of the figured bass all kinds of chromatic chords could be produced through the contrapuntal movement of voices. In that case the handling of altered tones become a linear property taking us away from the homophonic notion of chords/harmony. Bach's 371 Harmonized Chorales is my go-to source for finding just about any possible movement of voices/chords. In it I'm sure you can find examples like a minor key passage using a root position ii chord. Call it borrowed if you like. But it probably will be more insightful in such a case to identify it in terms of linear scales and counterpoint. My chart above is meant to apply to a homophonic rather than contrapuntal style.

The theory of borrowed chords is that there is a set of chords that are diatonic to the major and also the minor with the same root. Thus, diatonically, C major, for example, contains C, F and G maj., D, E and A minor and B°. Since the parallel key is C minor, the diatonic chords from that are C, F and G minor, E♭, A♭ and B♭ major and D°.

Using the relative minor of C major - A minor - throws up a few other chords, due to the vagaries of minor diatonics. The basics will be the same as C major, but since A melodic minor contains F♯ and G♯, other chords are available - D major and E major being the most relevant.

I guess at that point, the parallel of A minor is relevant - A major. So we then get presented with A, D and E major (not much variance there), F♯, C♯ and G♯ minors, and B°.

Which possibly goes a long way to explaining why so many different harmonies can and do work considering one specific key... Probably easier to say 'these few chords don't work too well...x, y , z...

Funny that the diminished are basically the same, or not so, considering there are only 3 to choose from!

Not the answer you're looking for? Browse other questions tagged scales chord-theory or ask your own question.

4
Why does the chord progression (i-)#IV-i sound acceptable?

10
Using modes and static harmony
3
Why does most “Country” Music use mostly major and minor plain simple chords?
1
What exactly is a Major scale?
5
Analysis of borrowed chords in Lush's “Single Girl”
3
Parallel chord substitutions
1
Can I borrow chords from Harmonic minor?(Modal Interchange)
4
Compelling Use of Non-diatonic Chords in Rolling Stones
0
What is this chord progression? and where do this chords came from?