I have the following phrase: 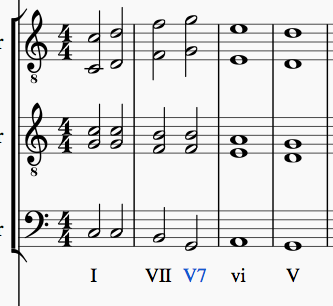 I like the progression and the tension that builds during the VII and V7. I also like the melody in the top staff, but I am happy to change it if necessary. Here's the issue: I find that, as is, the phrase lacks richness--it sounds quite tinny to me. Last time I had this issue, I was told that I should look at the voicing of the chords. Try to "double the root first." Well here is the makeup of the chords:

Now, my question is in two parts:

A) How can I alter the voicing of my phrase to improve the overall sonority? Again, it sounds tinny to me--quite hollow and flat. I would prefer something more rich and balanced.

B) (This is more for my own curiosity) Is consistency in the voicing of chords (i.e. the same amount of roots, thirds, and fifths, etc, throughout each chord of the progression) a technique in harmony? Or is it natural and okay that the relative voicing of a chord can be totally different from one chord to the next?

Thank you so much!

The lack of "richness" — the "tinny" sound — is largely due to the absence of thirds in your harmonies. Also, the parallel octaves, parallel & direct fifths contribute significantly to the weakening of the harmonic motion & voice independence. (I've marked up your extract, highlighting the various parallelisms between parts. Lines of the same colour mark parallel or direct octaves & fifths between parts. I have been chastised for pointing out the weakening effect parallelisms on this forum in the past, but that doesn't make the phenomenon any less real.) 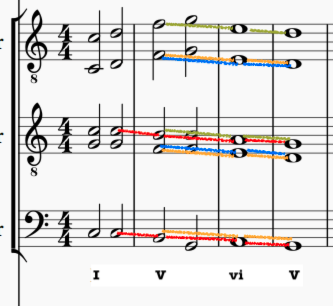 I've also posited an alternative analysis of your harmonies. Your bar 2 is essentially a V harmony: functionally & aurally, moving from vii° to V7 is perceived as an embellished dominant harmony moving from first inversion to root position.

As for your second question, let's have another look at your own analysis. Your top line is actually one part doubled at the octave, so overall you have 4 parts, not five. And, as I noted initially, there is only one chord containing the third (V7), so all of the others will sound open & hollow. This is a great sonority if that's what you intend (Mozart famously uses it to great effect at the end of the Kyrie in the Requiem), but you don't seem to want that sound. As a rule of thumb, always include the root & the third & if you have to omit a note, omit the 5th. As for doublings, double the root first, then the fifth next. Try not to double the third, especially in V where it's a tendency tone & should generally move up by step, so doubling it leaves you with either parallel octaves or leaping from a tendency tone. The only other notes in a harmony that you need to ensure that you have represented are any non-triad notes: eg the 7th or 9th. So for V7 you can safely omit the 5th & double the root & still have a fully functional V7.

One issue you'll find with your melody if you harmonise bar 2 with V7 is that you have the 7th in the top line & it resolves back to the mediant at the start of bar 3, so you can't repeat the 7th in another part without introducing parallel octaves.

Another strategy you might want to adopt is to increase the contrary motion between the outer parts: it's much easier to avoid parallelism when the parts are moving in different directions.

Here's a quick & dirty example illustrating some of these principles:

It has it's own flaws, but hopefully it provides some food for thought.

2
Octave apart voicing
6
How do I learn to detect chord voicing by ear?
3
Smooth Voicing Leading Explanation
13
"Only open voicing below middle C!" Really?
2
Non-cadential use of 6/4 chord
2
How to smoothly re-establish original tonality?
2
How to write 4 part chord progressions when the roots are only a step apart
3
Beethoven Piano Sonata no. 1 in F minor: What are the first 2 chords of the transition?
7
Clarification on Schoenberg's "pivot tones" in minor from Theory of Harmony