(When writing notation for piano)

One way to notate it would be as an arpeggiated chord, as shown here: http://en.wikipedia.org/wiki/File:Music-arpeggio.svg

Another way would be to notate it using acciaccatura's.

EDITED: what I'm asking for is the difference between these two bars. If the damper pedal is activated, they both end up sounding exactly the same. Why would I choose one over the other? 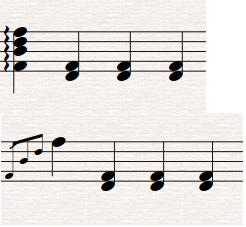 The first example I would play as a chord that is pressed in a rolling motion so the notes are heard separately in order but still held together. This can be called arpeggiato or a rolled chord.

If the notes should not be held together, as in an arpeggio, then second is what you want. If the notes should be of equal duration then you'd want to just go with straight 16th notes, but if you're just quickly climbing up to the top note (which receives most of the allotted time) then I believe the second example is perfect.

These will sound similar if using the sustain pedal but not exact. Without it, or with the soft pedal, they'll be quite different! This Wikipedia page has a little more on the distinction: http://en.wikipedia.org/wiki/Arpeggio

An acciaccatura is a kind of (single) grace note. An arpeggio is a whole chord spread out so that the notes are played individually, on different beats. The two terms are not related.

What isn't, however, is that the arpeggio is rolled and has its main musical accent at the start (which is executed on-beat). An acciaccatura is usually executed before the beat (as opposed to an appoggiatura). And even if you choose to execute both at the same time, the acciaccatura is a lead-in phrase to the principal note and you would play its notes lighter than the principal note (and phrase them as leading notes) as opposed to a chord where the notes carry equal weight and impetus.

A Midi rendition from a note typesetting program might not capture all of those subtleties though it is likely that it would leave the interpretation of the sustain pedal to the Midi expander and stop all notes properly.

And the Midi expander might still opt to choose to give a different sustain to notes that are actively held and notes that are held by the sustain pedal.

Partly that's a matter of efficiency: the number of simultanously producible notes is limited by the expander's processing power; and while the number of keys a person may hold actively is also limited for most manners of playing, a sustain pedal can be kept down the whole piece.

7
Where do accidentals go when voices overlap?
2
How do I harmonize a C major scale in fourths and then apply negative/mirror harmony?
27
Where do the double accidentals go in "theoretical" key signatures?
2
Correct chord notation for inverted 7ths
14
When, if ever, are arpeggiated six-four chords really "real"?
2
Notation for Equal Division of an Interval?
5
Piano arpeggio symbol: split vs drawn through
7
How to simulate performance volume levels in MIDI playback
4
What is the proper shorthand notation for a multi-measure chord tremolo?
4
Notating a sus chord with thirteenth