Is a secondary dominant always a seventh chord?

The fact that a secondary dominant, when a major triad, has a M3 in it, which usually moves to the root of the next chord (V) is sufficient. With that b7, there's the tritone which convincingly moves things on, but not needed. And as @piiperi says, that secondary dominant doesn't even need to be major or minor - diminished chords have the propensity to act as pivotal chords in their own right, and take the music into other modulations.

Even when the v/V is minor, there's still enough scope for it to work, as it sometimes does when something in a minor key only uses natural minor notes. Not as convincing, but still feasible. It's good that we are now moving away from the concept of rigid rules, which don't exist these days! I nearly said never, but a few centuries ago, adherence was expected!

A secondary dominant "tonicizes" the chord that follows it, temporarily making it sound like a I chord. So, the secondary dominant needs to lead into that chord. A V chord can do this with the third of the chord, which acts as a leading tone into the root of the following chord. It does not need the 7th of the chord, but that will increase the pull with the existence of the tritone between the 3rd and 7th of the chord. A diminished vii chord can also be used because it contains the leading tone going into the next chord (the root of the vii chord), in addition to the existing tritone in the diminished chord. It is basically the upper portion of a V7 chord, without the root.

A V chord or a diminished vii triad really only point towards one tonic. However, if a fully diminished vii7 is used, there are more possibilities. There are four different tritones in a fully diminished seventh chord, which could point towards four different tonics. For example, D F Ab Cb could "tonicize" Eb, F#, A, or C (and their enharmonic equivalents) depending on how it is interpreted. If more flexibility is desired with a diminished chord, the 7th needs to be used.

while the (V7) is almost always used: in jazz (IIm7 - V7) the proper V is rarely found (as in folk tunes in a choir setting or in church choral settings *)

I just went through some Bach-preludes and didn't find a proper V.

They V will appear in a SATB voicing like: 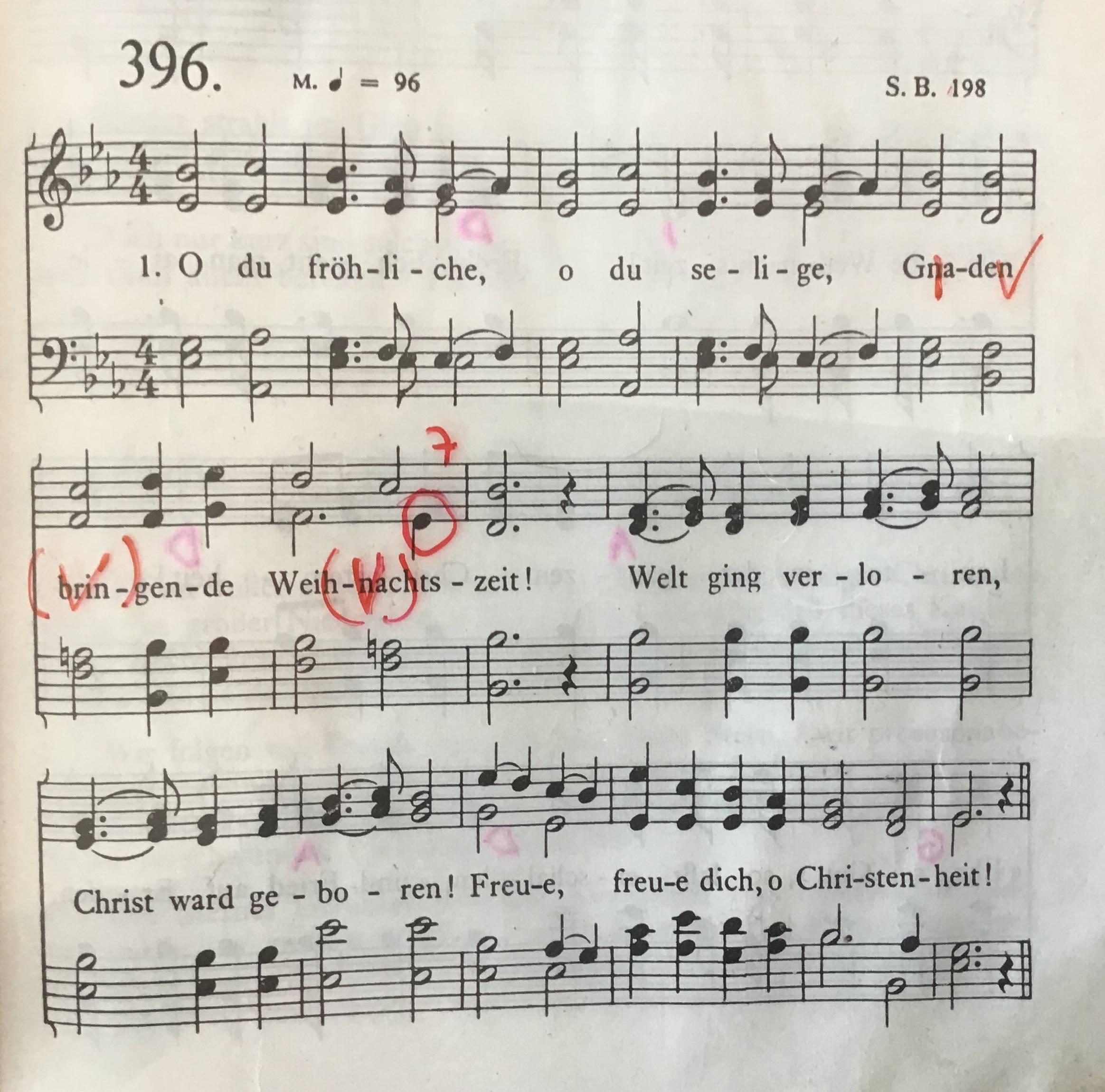 Most people have stated here that you don't need the seventh to create a secondary dominant sound. That's true, as listening to D, G, C makes sense and sounds arguably just as good as D7, G7, C. But, there's one exception!

"Required" by what? Are you referring to some cultural convention or a law of nature or what? ;)

Wikipedia's example shows a D major without a seventh: https://en.wikipedia.org/wiki/Secondary_chord

In this example, I think the F# note alone works in some kind of a secondary dominant'ish function, even though it's not even a chord.

On the next line I added more simultaneous notes, leaving less room for imagination. Do these sound secondary-dominantish enough to you?

To my ear, the one with the C-F# tritone gives the strongest secondary dominant vibes, followed by the D-F# version. There are at least two ways to think about it. What is the implied "true" chord there - is it D7, or ... F#dim7? In the Barry Harris way of thinking, the dim7 is the "real" dominant.