Can I play `A scale` song on a `C scale` harmonica?

Here is how to play a C scale on a harmonica. But I found a song which is in the A scale. So, is this possible: to play the A scale song on the same harmonica? If so, What would the table look like? or how can I change the C scale to A scale? Is there any algorithm to do so? For example, when I change it to E scale, is there any equation to do so? Thanks. 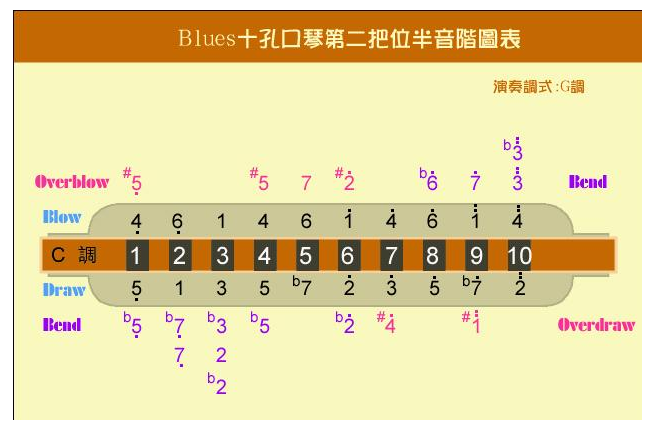 For Blues, don't raise the G. Use the A mixolydian scale instead: A B C♯ D E F♯ G A.

Or, for harder Blues, use the A minor pentatonic: A C D E G A.

For really hard Blues, play the blue notes. But you have to find them in the middle of the bend because they exist partway between the notes of the diatonic scales. In A, there's one between C and C♯ and between E and F♯ and between F♯ and G.

To learn the "algorithm" for finding the sharps and flats in a scale, read about The Circle of Fifths/Fourths, Key Signatures, Key Modulation, and maybe even The Pythagorean Comma.

Using the Circle of Fifths, you'll see that E is one step farther from C (no sharps/flats) than A (3 sharps). So it has 4 sharps. The same three from the A scale plus the new leading tone (Major Seventh) D♯ instead of D.

I've heard it's common for a player to have several harmonicas in different keys. Usually they're not too-many steps (fourths or fifths) away from C. So a small set would be C, F (or B♭), and G (or D). It's also common for a player to choose the harmonica that's keyed to the fifth to make the mixolydian (♭7) <-> ionian (Major 7) transition simpler. So for a song in A, you'd grab the D harmonica. This can help put the melody in the sweet spot. [This paragraph assembled from heresay, use at own risk.]

You're probably better off getting a harp in the appropriate key - much less bother - or - get a chromatic harmonica (with a button at the side ) to give all the # and b neccessary, so you can play in any key you like. They're often based in C maj. anyway, so can still work like your existing one.

Not the answer you're looking for? Browse other questions tagged scales harmonica or ask your own question.

14
Breathing practice for harmonica
4
Why does classical music sound out of tune on a Hohner Marine Band Deluxe Harmonica?
4
How should I choose the key of my harmonica?
2
Is it possible to play all melody songs on 10 hole diatonic harmonica?
3
Can a 4-hole harmonica play more than 8 notes?
1
Harmonica key advice sought
1
Is Harmonica Mugig 10-hole 20-tone Blues Harp similar to the others in view of blows and draws?
0
Which is more affordable and easier to maintain a harmonica or a recorder?
3
Harmonica on blues should be same Key as guitar?
2
Why is F sharp the only sharp Major Diatonic Harmonica offered and why is there no G flat harmonica?