Am I right in that it is a diminished triad without the third?

So I have come across a difficulty in my harmonic analysis having to do with the tritone being by itself. Obviously, this gets across a dissonance that has to resolve but just from the tritone, it isn't clear which dissonance it is supposed to represent because there is no third or seventh, just the tritone.

The tritone I came across is the same one I usually come across in my canons as a diminished triad. But in this case, all I really know is that it is used as a dominant, not which one. On the one hand, assuming it is A diminished makes the fewest assumptions because the only note not present is the third. Eb diminished, while it does have the same tritone, is not diatonic to Bb major. It is a chromatic alteration of Eb major in the case of the key being Bb major.

F7 is the only other diatonic chord which has the same tritone but for one thing, I hear no F or C, the first and fifth notes of the F major chord which F7 is based off of. Also, according to the harmonic analysis of the canon I am currently analyzing it resolves to Eb major. This along with the bass note of Eb suggests that it is Eb diminished without the Gb.

But that is a chromatic alteration of Eb major in the perspective of Bb being the tonic. And diminished chords rarely if ever resolve to the major chord of the root. They usually act as a dominant chord. So is this A diminished then or is it just an A/Eb dyad?

EDIT: Here is the section of the score with the harmonic ambiguity of the tritone: 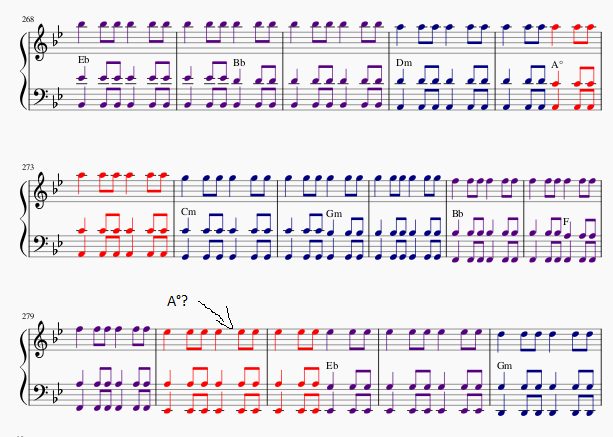 Without more context I do not think it will be possible for us to answer exactly. In fact, probably even with more context it may well be an asnwer that remains debatable. Many of the most interesting and beatiful ideas in music (and other arts) are based in the idea that the art suggests something that the anyone can then perceive in different ways. If you have a single triton there with nothing else... that leaves a lot of space for interpretation! From what I gather you have a piece in Bb, and at some arbitrary point the triton A-Eb, and after that some sort of resolution to Eb. Is that correct ?

I'd say some obvious suspects would be:

Maybe with some more context we'll be able to give you more hints, but I expect that it will be a situation where your ears, more than your theoretic mathematics will have to judge what the function of that part is.

My teacher used to say that any analyses I made was good, as long as I could convince him that the music could be perceived in the way I saw it. Sometimes that would take some playing and improvising, sometimes it meant that after doing that together I'd come to a conclusion that a chord actually was more likely to have a different meaning than the one I thought it would.... There's art for you!

And there you have the wonderful, ambiguous world of the tritone! Standing alone, we have no way of knowing which way it will resolve. Add some more notes and an expected resolution may become apparent - but chords don't always resolve in the expected way! (And a C, Cdim, C sequence - using the dim chord simply as a temporary variant of the basic chord - is far from uncommon.)

Not the answer you're looking for? Browse other questions tagged harmony analysis or ask your own question.

9
Differentiating between II and II7 (secondary dominant V of V)
3
Is there a name for this phenomenon in the circle of fifths?
3
Why does VII have dominant function in natural minor
5
How a chord is analyzed as a "chromatic mediant of the V"?
1
Melodic lines are diatonic, harmony doesn't seem to be
2
What is this chord in Grande Valse Brilliante?
4
Diminished 7th notation, match the key or key signature?
4
Diminished seventh spelling but functioning as an Augmented Sixth?
3
Why the flat roman numerals in minor when they aren't needed?
8
Chord progressions in Harmonic Minor