Why do some synthesizers have two or more oscillators?

Many synthesizers (like the Elektron Analog Four) have two oscillators. The Novation Peak has even three oscillators. This seems to be common in subtractive synthesis: 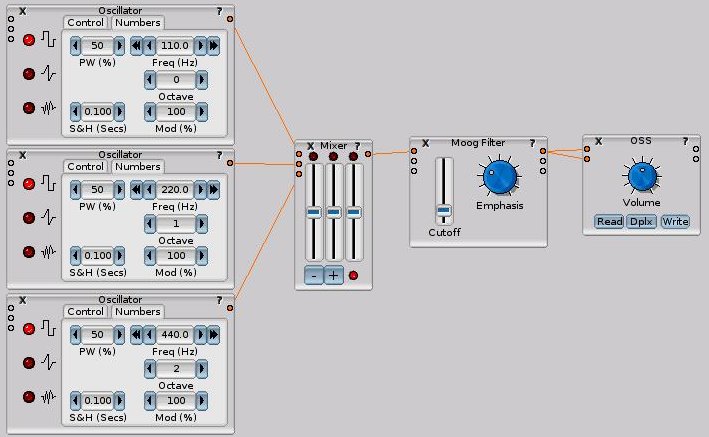 For what practical purpose do synthesizers have multiple oscillators?

Firstly, a single oscillator will tend to produce rather a subjectively 'thin' and static sound. This isn't always the case (as later stages, such as the filter, or a separate chorus stage, can add warmth and movement), and it isn't always a bad thing - but of course if you want to have a one-oscillator sound on a synth that has more oscillators, you can always decline to use more than one!

We're often told that musical sounds are periodic, and that they have overtones that are integer multiples of the fundamental frequency. This often is true of synthesizer oscillators. However, in nature, this is usually only approximately true - a vibrating string will often have higher overtones whose frequencies are a little higher than those multiples, for example. Many acoustic musical sounds also have multiple oscillating elements at slight pitch offsets - the string section is a classic example. Being able to play multiple oscillators, slightly detuned, is therefore useful for producing these subjectively more natural sounds.

You can also take this detuning further and have oscillators tuned in musical intervals (e.g. a fifth apart.) You could also use mix different shapes of oscillator to produce spectra that couldn't be produced by a single simple oscillator.

Possibly the most interesting uses of multiple audio-rate oscillators is to use one to modulate another at an audio rate - in techniques such as PWM, FM, and oscillator sync. These techniques also do a good job of producing more interesting and animated (though not always very natural!) spectra.

I've assumed here from the picture that you're talking about multiple audio-rate oscillators, that would normally be described as 'VCOs' - you'll probably be aware that synths usually have one or more low frequency oscillators (LFOs) that can also be used for modulation purposes.

I think that the shortest and most precise answer to your question is: to produce timbres that are not possible with a single oscillator, including an entire form of synthesis (FM) that requires at least a second oscillator to modulate the first one.

In a slightly longer answer I would describe the West Coast and East Coast approximations to synthesis, as each one takes advantage of the presence of multiple oscillators in its own way.

Anyway, and with all due respect, I want to disagree with this affirmation in a comment by @Todd Wilcox:

If you've ever spent a good chunk of time working with a synthesizer and crafting sounds, you likely found out that there's not much you can do with only one oscillator.

It definitely depends on which oscillator are we speaking of. In the modular world, there are examples such as Mutable Instruments' Braids, that are chosen to be the only oscillator present in many small Eurorack systems, and the variety of sounds achievable is huge. However, I agree that a hard-wired synthesizer with a single oscillator is pretty limited.

3
Are some synthesizers and keyboards able to interchange sounds?
29
Do different synthesizers have different timbres and/or produce different harmonics for the same given waveform?
7
How do multiple analog synthesizer voices work together?
21
What are the practical advantages of keyboards with non-weighted keys vs. weighted hammer action?
1
Compare FM synthesis sound signal to equivalent additive synthesis signal
2
Using a tremolo stompbox between the swell pedal and the synth?
10
What exactly is the "cross modulation" on Roland Jupiter and JX analog synthesizers?
6
How to make a Shepard tone, shape frequency amplitude response in Reaktor
2
Phase of synced oscillators in analog synthesizers