I just recently learned about time signatures and the beat and I need to clearly understand the relations of these things, as for now I don't seem to do it. Please correct my thoughts on the following stuff.

As for the time signature 4/4 the first 4 tells that there are 4 beats in the measure. What exaclty is the measure? Is the measure the second 4 that tells us it is 1/4 of the duration of the beat?

If the time signature was 3/4 for the same bpm would the single note duration still be 0,17s?

The top number - in red for the image below - is how many beats are in a measure (or bar.)

The measure are indicated on the staff with vertical lines - measure are shown in the image below with a red bracket. 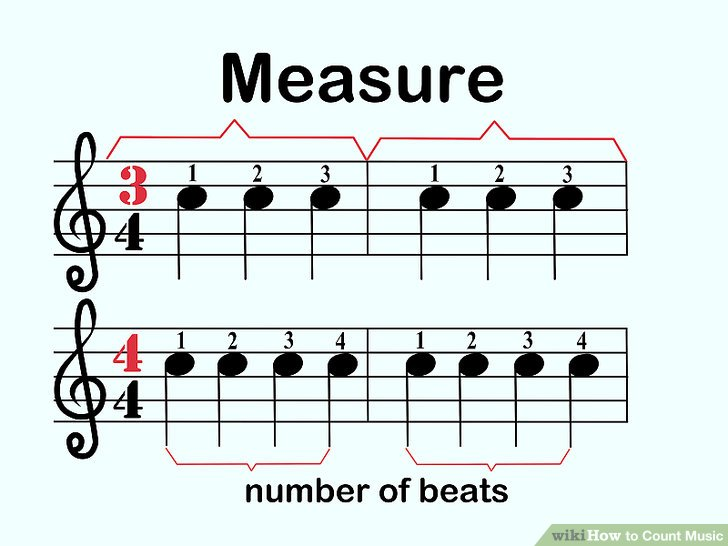 A nice PDF about meter is available from Toby Rush.

Is the measure the second 4 that tells us it is 1/4 of the duration of the beat?

No. Now we know that there are 3 or 4 beats in the beats depending on the meter.

I think there may be some confusion about bpm/tempo and meter, something like a bpm number is a sort of meter.

Perhaps the thing that needs to be said is meter is about placement of accents.

Let's say you had a bpm/tempo of 120 bmp and the beginning of the music was just a kick bass drum playing quarter notes, just playing the beat. Importantly, imagine that the drummer (drum machine?) didn't place any accents on the drum. How would we hear that the music was in 3 or 4? We wouldn't know what the meter is.

We need something to happen to create an accent. The basic theory is that an accent will go on beat 1. That can be accomplished many ways. You could simply hit the kick louder on beat 1 and light on beats 2, 3, or 4. You could have another drum or instrument play on beat 1. You could use a pick up note like...

All digital recording programs I have seen include a metronome/click track with a bell feature that will play some bell or other accent on beat one. That bell is there to help hear the meter more clearly.

So, let's image this kick bass plays a pickup note and stomps on beat one hard followed by 3 soft beats. That's a total of 4 beats with an emphasis after the pickup note that let's us hear that the kick after the pickup is beat 1. If we are familiar with sheet music, we can imagine that beat 1 coming after the barline.

If we speed up the bpm to 145, the measure do not get shorter. Each measure will be the pattern of one accented beat followed by 3 softer beats. The measure is still 4 beats. The duration of actual time will shorten, but the measure length - which is measured in beats rather that duration in seconds - stays the same.

Maybe the important distinction to make is between meter length and duration in seconds.

The measure is the part of the score between the two vertical lines.

Nothing in the time signature tells you tempo, the amount of time taken up by each beat or measure.*. The tempo is indicated separately by a notation such as "60 bpm," or "Larghetto." The tempo notation is optional.

* While it is technically true that the signature does not tell you the tempo, there are conventions for certain kinds of music that do. For example, if the piece is Irish and it's in 6/8 time, it's probably a jig and it's played at around 110 bpm, with each beat being one triplet of eighth notes. When conventions like that are sufficient, the arranger may opt to not notate the tempo explicitly.

Now you've established that a measure (or bar) is a box in which a certain number of beats lives, and the top number tells how many beats; the bottom number tells what kind of beat each one is, you'll realise it's basically like a fraction. 3/4 tells there are three of them, and each one is a quarter.

All that is great for simple time sigs, but be careful with compound ones.

Also, since you're making a metronome, the exact number of milliseconds is important. Also, consider making one that doesn't just go click, click, click, click, but can go ping, click, click, click. Much more useful, as the ping tells the first beat of each bar, which is helpful with more than merely keeping time - it keeps the player at the correct place in the music.

14
How can I find the length in seconds of a quarter-note (crotchet) if I have a tempo marking?
30
Why are measures (aka "bars") important?
6
What is a measure?

4
How do I make this beat fit in the measures evenly, time signature-wise?
0
How should I understand time signature?
6
Do you need anything beside the BPM and number of beats per measure to specify a rhythm?
7
What exactly is the point of time signatures and measures?
7
Why are time signatures not used in this score?
1
Is there a 2/3 time signature, or "cut-time" equivalent for 3/4?
3
BPM, beat durations vs frequency