Why might a major chord on piano be voiced Root 5th 3rd Root? 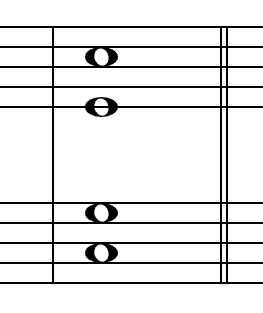 Why is there this voicing over, say, just a Root 3rd and 5th? Is it just that it sounds better?

But the reason for a given voicing of one chord can usually not be reduced to just its sound as such, but to the musical context. In particular if you use only narrow chords in root position, you'll inevitably have a lot of big jumps in parallel movement. This can be used as a stylistic element; some guitarists just slide around one chord shape over the neck all of the time. But it sounds rather raw and unsophisticated.

What I mean is this: to play a progression like Ⅰ - Ⅳ - Ⅴ - Ⅰ with all narrow root-position chords, you need to do something like

Note that the “average pitch” is completely different in each chord, giving a pretty jumpy sound. OTOH, there's not really a lot of variation of any more subtle, interesting kind.

Classical music and many styles after it strongly avoids this kind of parallel movement. In classical music, harmony isn't just understood as sequencing of chords but as a particular form of counterpoint between individual melodic voices. And this generally strives for smooth transitions with not too big jumps in each voice (unless as a deliberate effect), and tends to prefer contrary motion to parallel motion to “unglue” the voices. This is quite hard to do with only narrow voicings. So classically, the Ⅰ - Ⅳ - Ⅴ - Ⅰ progression would more likely be rendered something like

Much more coherent. (Notice that the F and final C chords don't include a fifth here; that is often not possible with only three voices in common-practice voice leading.)

There are probably countless reasons why you might choose to voice a chord this way; some which come to mind are:

1. Intervals like the third sometimes sound a bit muddy in the bass register, therefore one might wish to have more space between the root and the third. See this question for more detail.

2. It may arise due to the needs of proper voice leading. Depending on what comes before and after this chord, this voicing may well make for the smoothest/most pleasing transition.

3. These kinds of voicings are also common in Chorale harmonizations (examples) which are commonly used as a tool for teaching harmony and voice leading (see above), which might be what that lesson is setting you up for. Chorale harmonizations are often written on piano staves (and played on keyboard instruments), but ultimately originate as vocal music which leads to making slightly different choices than one would make in music written with a keyboard instrument in mind.

4. As you say, one might feel that it sounds better. The most important factor when describing chord voicings is generally the bass note, as it determines which inversion is being played, but there's generally more leeway in the placement of the upper intervals. This is often determined by wanting to have a certain note in the top (i.e. the melody) voice. It may also be said that adding doublings of the root (and to a lesser extent the fifth) tend to add "fullness" to the chord without affecting its function or overall character too much.

You should try experimenting with different voicings yourself and see how different ways of arranging the intervals sound to you. Music would be quite boring after all if every chord was arranged strictly in ascending order from the root.

There are already some good answers here, but since you ask specifically about piano, it's worth observing that this voicing fits perfectly under the hands and will be found in the literature countless times.

The timbre or tone quality of an instrument comes from the overtones or harmonic series that accompanies the fundamental note (the played note). Your hearing range impacts what overtones you can hear. When you play two notes together, there is some degree of dissonance, based on the notes and their respective overtones, and the range in which you can perceive them. An octave shares the most overtones, so has the least accompanying disonnance. Then the fifth, then the fourth, then the third, and so on, with the most dissonant being a minor second, assuming a 12 tone chromatic scale. These disonances are more pronounced in the lower register because you can perceive more of the overtones associated with each note. Thus it is common in piano music to write a chord with less dissonant intervals in the lower register.

It also may be written with a particular voicing for other reasons. For instance, to make it easier to play or to leave counterpoint a note open in the lead.

5
What is this chord (spelled 2nd, 4th, 5th) and how is it used?
2
6th string root dominant 7th barre chord voicing
7
Why does the IV - V♯ - I chord progression work so well?
4
What is a chord consisting of Root, 9th and 11th called?
10
13 Chord Voicing Without Root, 3rd or 5th
2
Finding root keys and chord progression for arpeggios
10
Why do diminished chords have 3rd minor?
7
Removal of the 5th in extended chord voicings
4
Why do some composers/songwriters choose inverted chords over root position chords?