How was the D chord constructed?

I'm a beginner trying to teach myself guitar, and I thought I understood how chords work but the D major chord just confuses the heck out of me.

So I can see that in the later part of the chord, when it goes from D to F#, and before it, when it's A, but I don't understand what's happening with the open D string. Why does it do directly from D to A when there's a whole F# there?

I don't know if I'm missing something or maybe if I need a break from all this, but help would be appreciated.

I think the confusion here is that it doesn't matter what order the notes are in. Think of a piano for second...you can pick any D, any F# and any A anywhere on the piano regardless of what order or how much space is in between the notes and you will still have a D major triad. You can also pick 2 or 3 of any notes and you would still have a D triad. Same with guitar.

The voicing will be different but the name of and quality of the chord is the same. Different voicing may be said to be open or close, depending on the space between the notes, and may be considered in an inversion depending on the lowest sounding note but it will still be the same chord.

You wouldn't be able to play the D and the F# at the same time because they are on the same string.

The only way to play both notes would be to play the D on the 5th fret of the A string, resulting in this chord:

This is far more difficult to play and the sound of the chord is arguably very similar.

Okay, so..
The Chromatic Scale consists of all twelve notes; that's the entire fretboard.

The Major Scale consists of the first, third, fifth, sixth, eighth, tenth, and twelfth notes of the Chromatic Scale; starting from the desired root note (so D in this case).

A Triad is basically any Diatonic Chord (Non-Chromatic) that consists of 3 notes.
Particularly the Major, Minor, Augmented, and Diminished chords.

The Major Triad consists of the first, third, and fifth notes of the Major Scale.
(Or you might say: A Major Third and a Perfect Fifth above the Root).

More often than not, you will probably want the root note to be the lowest/deepest note. You don't have to, but that's typically how it's done. It's not a rule, it's common convention. Anyway, your chord diagram depicts what is probably the easiest and most common way to do it; without requiring some crazy finger acrobatics. 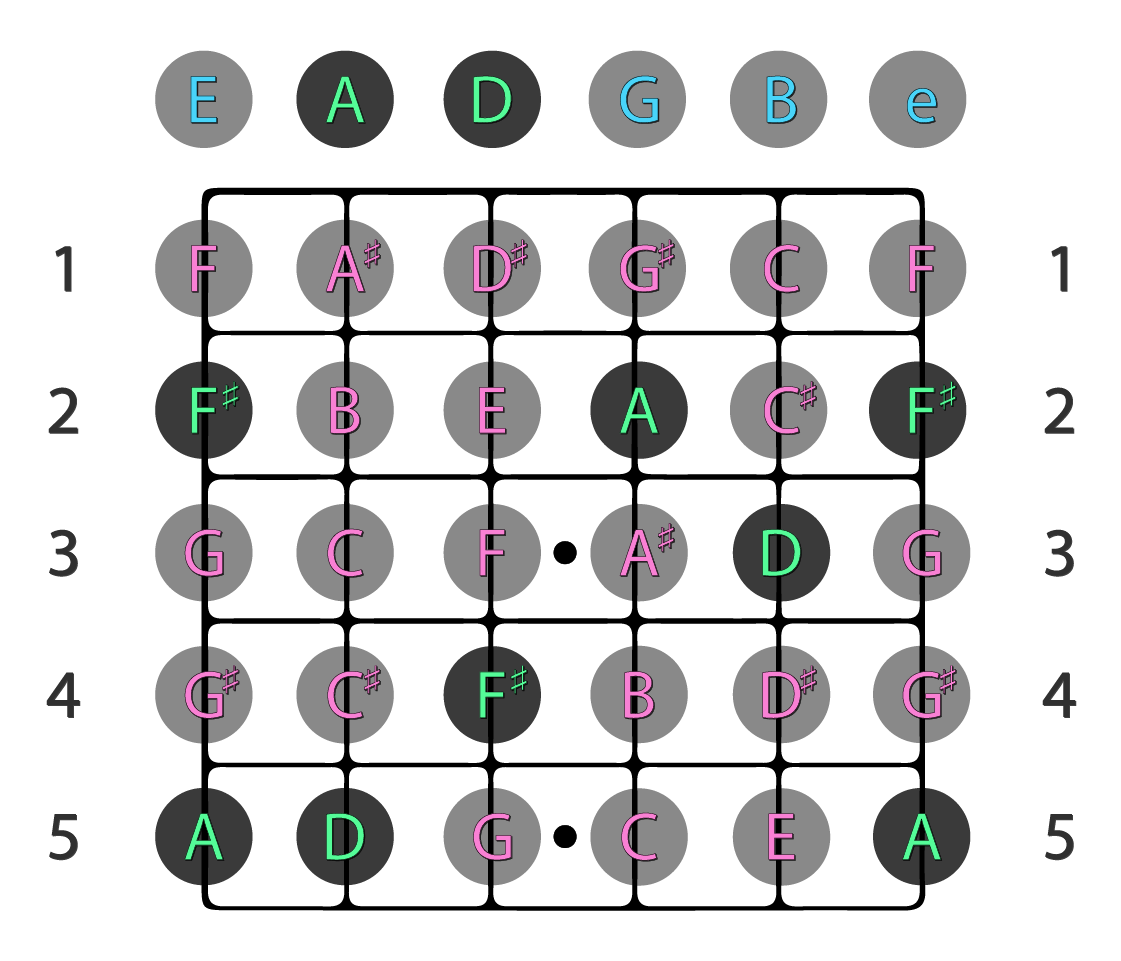 You've found out that basic chords are triads. That means three notes, all different. In a major triad, those notes are 1, 3 and 5 of the major scale. What you're missing is that they can be played in any order, and still make a major chord.

In close position, they are sequential - each note is as close to the next as possible. Easy on a piano, as the notes are all there to be played. Nothing in the way. In fact, you can even play two or three of each note name, given enough fingers.In open voicings, as long as all the notes are there, they are spred out away from each other, rather than in sequential order.

The way the guitar is tuned cuts some options down in number, as it's impossible to reach certain notes while holding others down. So compromises need to happen. Yes, really with a D major chord, we need three notes, D F♯ and A. But it doesn't matter if there is one of each, or more, and the order can be changed too.

Generally speaking, on guitar, beginners are encouraged to play chords with the chord's name note as the lowest - that's called root position. The chord sounds strongest in that way, so initially, we're taught that D consists of four strings being played - as you show. Open D being the lowest. Then we have to find F♯ and A. If we played the F♯ on the D string, it would lose the open D. So we find something on the 3rd string. A is convenient. On the 2nd string, another D fits, leaving F♯ played on the top string.

To sum up - D, F♯ and A are needed for a D chord. The order doesn't matter, as long as there's one of each, minimum. On guitar, it's not always possible to play the notes in the order you'd like. In fact, sometimes, with more advanced chords, some notes have to be omitted - you just can't fit them in. But that's a story for another day.

You‘re on the right track. Very seldom a beginner of guitar playing is really interested in what tones he is actually playing when he holds / pushes down a string with his fingers in a bend somewhere on the frett. Generally he is satisfied to know just the name of the chords. But you want really to know what notes are there and why you do what you‘re doing. That‘s what I call smart!

You knew already quite a lot when asking. What you didn‘t know - it seems - was: that triads may be inverted and that playing triads in a chord progression only in root position wouldn‘t sound the same like they do as shown in the chord patterns for begiiners, especially when you play the chords by fingerpicking. E-guitarist playing a hard rock style consider this point in a different way. What you can do now after all the helpful answers on this site is lookong up the building of triads, their inversions and learn more about chord progression.

As you know now the tones of a chord are not always in the same row as in the triad of a the root position you can define any chords in any bends of your guitar.

My advice is: Study the triads by notating and comparing them in all possible symbolic levels: the image they show in the note staff, the tab, the chord pattern, the pattern on a keyboard, the abstraction of towers of simple note names in letters.

A chord doesn't necessarily consist of only 3 notes. An orchestra might have 50 different notes playing at once, but it can be considered a chord if the note names are all correct, D, F#, A. What you're playing is D - A - D - F#. You could also play 5 strings: A - D - A - D - F# (though it doesn't sound as good, because that places too much emphasis on the dominant note, A). But you can't play the low E string because then the note (E) would not fit the chord.

There are other fingerings for a D chord on the guitar.

When using standard tuning, if one plays a chord using an open d string as the lowest note, the lowest note one will be able to play along with that will be an open g string. The lowest note of a D chord one would be able to play would be an a (second fret g string). One could then use the remaining two strings to play a d' and f#' above those. Personally, I think that a d chord played in that fashion sounds rather wimpy, but that's the common way of playing a d chord.

Two alternative ways of playing a d chord are x-5-7-7-7-5 (barre the 5th fret across the A and e' strings, and then use the other fingers to cover the 7th fret of the d, g, and b strings) or x-5-4-2-3-2 (barre the second fret across the g and e' strings, use middle finger 3rd fret b string, and the other two fingers on the A and d strings). The latter approach sounds very nice, but is unfortunately likely to be awkward to work into a progression.

Not the answer you're looking for? Browse other questions tagged guitar chords scales chord-theory acoustic-guitar or ask your own question.

17
How to memorize seventh chords and inversions on piano?
10
Decide which chord to use
2
Playing one chord over another
4
Triads in Music Theory
5
To what degree do professional pit band guitarists follow the chord charts for pieces?
2
Chord progressions fluctuations
3
Chord progression, how to add the bass properly
2
How to start now Guitar and Music Theory Or Guitar Theory
10
What is the strict definition of any chord in the world?
2
when I press the string most of the time 2nd string it seems like muted. Is it because im a beginner?