Where does the Eb diminished 7 in I Wanna Be Around come from and how to play over it?

I am interested to know where the Eb diminished 7 in the first 4 bars of jazz standard I Wanna Be Around come from? My guess was that it relates as being a sort of tritone substitution for the V of the D-7, which is A7. Does this make sense?

My next question is how would you approach it when playing over the intro changes? We are nicely in C and then the Ebdim7 pops up. I have been playing a Diminished arpeggio but it feel s but boring!

I was also considering that Ebdim7 is the same diminished system as F7b9 which could be viewed as a Csus13b5#9 which TBH doesn't make much sense as a usable chord but maybe it could be used to played a mixolydian or altered scale? Another option is that B7b9 is also part of Eb diminished scale and of course can be seen as the VII of C major.

Perhaps I am over thinking this! Any thought? Thanks in advance!

The first few bars are sometimes chorded as:

Either way, we usually see an Eb bass note for at least the second half of the fourth chord.

I'm not sure we can explain it as a substitution for A7, dominant of D, as the tritone C# - G is not present. Maybe we have to accept 'passing dim7 chord' as its own category.

What I'd play over it is the original melody, unless I was very sure I had something better! 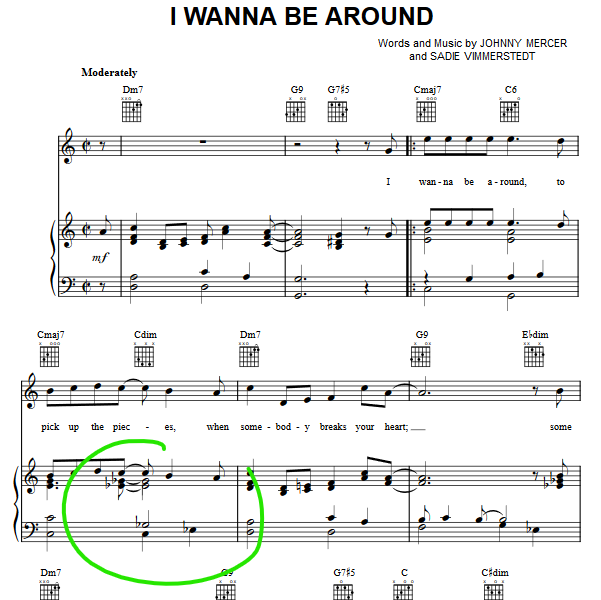 Note 1: Co7 can be used as a prolongation of C.1
Note 2: These enharmonically equivalent chords are also equivalent to F#o7

My interpretation is that the diminished chord has a dual function. It serves both as a prolongation of the Cmaj7, and it also functions as viio7/V; that is, F#o7 moving, eventually, to G(7).

So the overall analysis would be:

What to play over it

Isolating the diminished chord, you can use a diminished (a.k.a. octatonic) scale. It's an eight-note scale proceeding by alternating whole and half steps (or half and whole steps) from the root. So:

But you can also alternate between B locrian and the fifth mode of E harmonic minor.

The main progressions in jazz are I ii V I jazz cadence and the I vi ii V7 progression.

There are 3 variations of the 1625 pattern where the iv is substituted: I (V7) ii V7 the 2 diminished chords I#dim7 and iiidim7:

So Eb dim7 may be considered as a substitution (variation) of am, but it is not exactly the tritonus substitution as this would be eb,g,a,db for a,c#,eb,g

Eb dim7 is actually a chromatic VIIdim7 to dm.

Not the answer you're looking for? Browse other questions tagged theory chord-theory chord-progressions jazz solos or ask your own question.

3
Where does this chord come from?
5
Why do tritone substitute dominants have tensions 9 #11 13?
2
How does the chord change from VII7 to I work in the Jobin's Meditation?
3
Is the melodic minor scale use as the basis of chord progressions in modern jazz?
4
Goodbye Porkpie Hat - solo harmonic analysis
0
What is this chord progression? and where do this chords came from?
8
How to apply Barry Harris 6th diminished voicings and maintain chord functions?
11
Where did "The Real Book" originally come from?
1
How to approach Iminor - VIImajor progression in a functional harmony way
5
Where do Zeitler's scale names come from?