Which key to modulate to? [closed]

Ask Question
Asked 11 months ago
Active 11 months ago
Viewed 231 times
1
Closed. This question is opinion-based. It is not currently accepting answers.

So I have finished the A section of my waltz and am wanting to go to another key for the B section. The waltz is in the key of D major. So these chords are diatonic to it:

My melody in the A section ends on an F# as does the bass. This gives a sense that the section is finished but also that the key will change. Now, theoretically, there are 5 options to where to modulate to using that F#. But modulating to E minor I figured would be very unusual for a piece in D major without a previous modulation to G major. So that was out. This left me with 4 options. Those would be:

The modulation to A major would be indirect. Modulating to iii I thought would be weird but it would be a common tone modulation because the note of F# is shared between the 2 keys. I have seen a ton of modulations to G major done via an F# rising to G. B minor would not be unusual at all, I would be doing a relative modulation there.

Someone else told me that because it harmonically makes sense, I should modulate to B minor. But why would this make more sense harmonically than say modulating to G major, the subdominant of D major, by raising the F# to G?

Here is my A section and the harmony I have in that section: 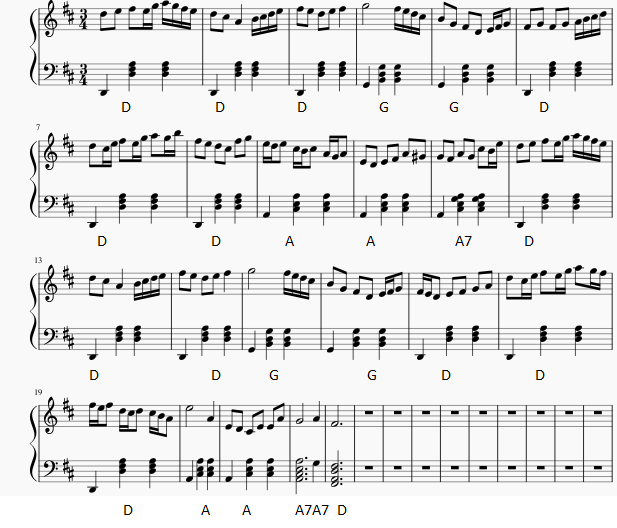 So which of these 4 keys I listed should I modulate to for my B section?

As the final chord of this section A is actually D:

your first section has the form of A-A'

you could continue now with section B in F#7 -> bm (and loop this phrase) and go back on the circle of 5ths (E7 -> A7) to the key of D. So section B would be a bridge leading to section A again.

Thus the whole section would have the schema: A-A-B-A.

Not the answer you're looking for? Browse other questions tagged composition harmony melody modulation or ask your own question.

9
modulating by a tritone
0
What kind of modulation is B♭ to G?
1
Key modulation in a fugue, how to not lose sight of the tonic?
26
How to modulate very smoothly and stealthily from major to minor?
1
Tips For Modulation Needed
5
How is Beethoven able to make so many sudden shifts in key?
4
Modulation from major key to relative minor - what could be the pivot chord?
9
Is parallel modulation a thing?
3
Modulation from D major to D minor, should I go sudden or gradual?