How should I write out the word “Choir” to be sung in two syllables?

The word "choir" is pronounced /ˈkwī(ə)r/, but if I divide the syllables they are cho and ir.

So I imagine that if it's to be sung on two notes my choices are: 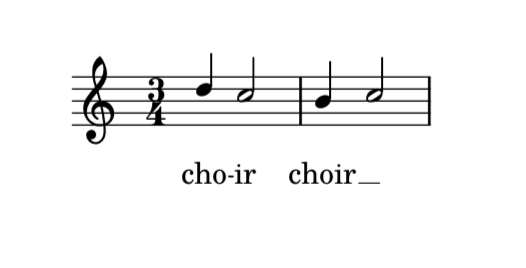 I think [based on this post}(https://music.stackexchange.com/a/52441/14836) that the second approach is called a melisma. I also think that the second makes more sense, but would love to get some input.

It looks like "choir" can be pronounced as either one or two syllables. If you want the two syllable pronunciation, you have to use the first way of writing it. The second way denotes one syllable spread over two notes, and the diphthong (combined vowel sound of the /oi/) will start on the first note, continue to the second note, and then the very end of the second note will have the /r/ sound.

The first way indicates that it's not sung as a diphthong but as two separate vowel sounds, the /o/ sound on the first note and the /i/ on the second note.

Side note: You could substitute the word "chorus" instead, which of course doesn't have a one-syllable version and eliminates the slightly awkward /r/ ending. But then again, "chorus" does not have the church connotations of "choir".

Not the answer you're looking for? Browse other questions tagged lyrics or ask your own question.

5
Should a lyrics extension line (underscore) be used on tied notes?

6
Lyric writing - books or essays?
1
A seriously difficult question about mistakes and intepretation of music
2
How can I make Lilypond start lyrics on the very first note?
0
How to write lyrics over multiple notes