How do I Read Bansuri Notation

How do I read Bansuri Notation

I know SA RE GA MA PA DHA NI SA, and the concept of low and high octaves.

How do I correlate the letters. And where are the letter different colors, i.e. Blue, Pink, or Red? 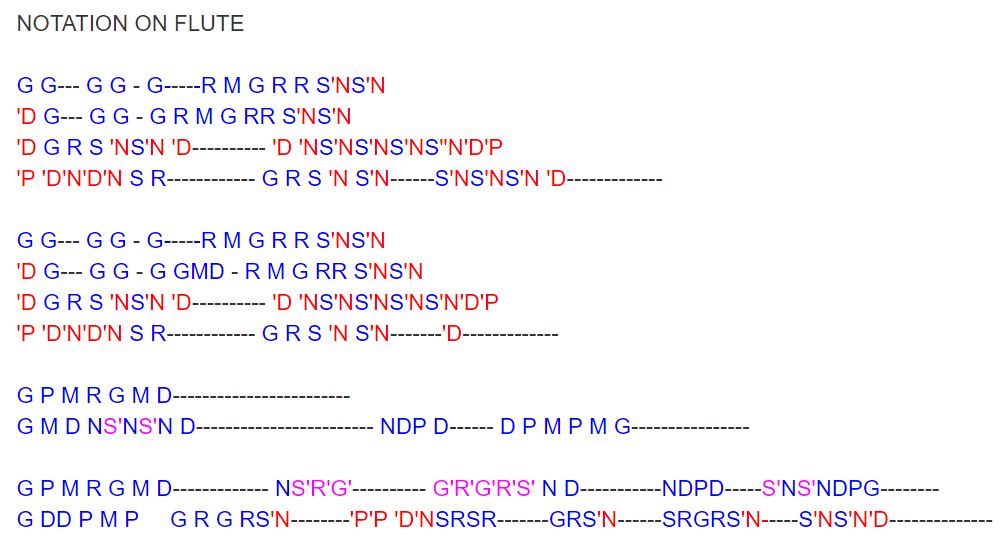 I observe that the author of the notation has (in addition to the colour coding) used an apostrophe to indicate the octave of the note. So, 'N is the nishādam in the lower octave and R' is the rishabham in the higher octave.

Since you ask how to correlate the letters, I presume you mean how to correlate them with the natural rhythm of the song? The given notation is not very helpful in this regard. It ought to have been partitioned into sets of 4, at the very least. You'll have to intuit this aspect, or obtain a better source of notation from elsewhere.

Edit (in response to the comments below):

The song naturally follows a rhythm that can be counted in cycles of 4 (or 8) units. So, I would notate the song with such indicators. For example, the first line could be better written as:

This is better than bunching the notes together without sufficient indicators, as in the given notation.

Not the answer you're looking for? Browse other questions tagged sight-reading woodwinds indian-classical bansuri or ask your own question.