How to identify modes in Medieval counterpoint?

I am reading through Alfred Mann's Translation of Gradus Ad Parnassum (The Study of Counterpoint), but one thing confuses me. In the first species, this counterpoint is shown to be correct:

But this one is apparently incorrect because the modes are different:

I don't really see how these counterpoints have different modes.

I don't think I fully understand how modes work, and I assume it would help if I knew how to identify the mode of a melody. Can someone show me how?

The problem is with how Joseph - the student - began his counterpoint... 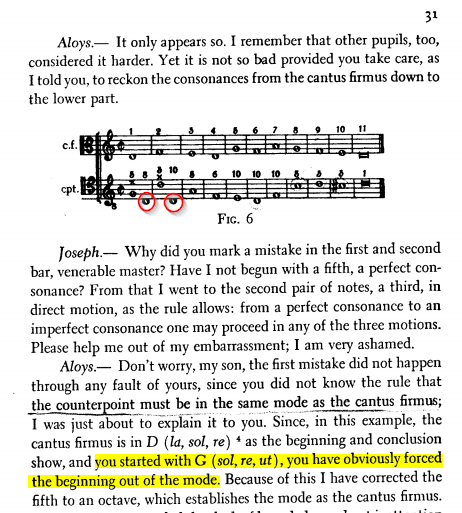 ...Aloysius - the teacher - explains that the counterpoint should have started on D.

Notice that Aloysius also say "the first misktake did not happen through any fault of yours..."

His meaning is that he didn't give Joseph all the rules before the assignment.

So for the mode to be correct it needs to start and end on the final (the tonic). Joseph's errors are marked with an x above the notes, the notes I circled in red are Aloysius' (Fux's) corrections.

But some explanation of the text itself might be helpful.

The format in which the book is written - a dialog between a teacher and a student - is a kind of literary device meant to evoke the old Greek, Socratic dialogues. As a writing device I think the purpose was to draw the reader into the text, because you can kind of imagine being part of the discussion with the teacher. Perhaps you can imagine that you are Joseph the student.

The downside of learning counterpoint in this format is just what Aloysius apologizes for: the rules aren't outlined in a concise, logical manner at the beginning. As you continue reading be prepared for this. Lot's of rules will be explained after the failed attempt at the exercise!

Another way to think about this dialogue format is: we learn best from out mistakes. Writing Joseph's mistakes into the text embodies that idea.

As long as you know Joseph makes lots of mistakes and many of the figures in the text are purposeful bad examples the book is easier to read.

They are not different modes. There are no accidentals except for the C# in the bar before the last bar. I will get back to that. The cantus firmus ends on D. So the mode is D dorian, in both cases.

It is marked wrong because this is a voice leading exercise. Fux will have laid out some rules on how to write a counterpoint to the cf. and that is broken in that example. It should say in the text which rule it is breaking. I don't have my copy at this apartment so I cannot double check for you.

These are voice leading exercises. The point is that you learn to practice writing counter point. You follow the rules and you write the best cp you can. And while doing so, you learn when to break the rules. How relevant these rules are to you is up to you to decide, because it is no longer 1700. But I do think that writing music within some constraint is good practice.

As for the last C# in the second to last bar. This is done for voice leading, but it breaks the modal character. A C# will give a major 7th, which means that it is no longer D dorian. D dorian is defined by a b7. If you break it, you are changing modes, by definition.

Therefore, I would never say this is in D dorian. It is in D minor, and you use b6 or 6, b7 or 7 depending on individual needs. You use 7 for strong voice leading and strong V-i cadence. You use b6 and b7 for minor melodies. You could use b6 and 7 for a melody with an exotic interval (harmonic minor). The chords of both harmonic (b6 and 7) and melodic minor (6 and 7) contain additional dissonant triads. If you raise the b7 to 7 then you change all chords containing that note. In the case of D minor, you are changing C to C#. So you are changing the VII chord to a #viidim chord, which is difficult to use. And the v chord is changed to a V chord (which is nice to have and the reason why you would do it). But you also change the F triad on the III degree to a IIIaug triad. And you keep the iidim triad you already had. So almost half your triads are now dissonant triads. Which is why you mix it up. Now, of course dissonant triads have their uses. It is just annoying to put chords under your melody when so many are dissonant.

Not the answer you're looking for? Browse other questions tagged theory counterpoint or ask your own question.