Here is a picture of the sheet music (Eine Klein Nachtmusik, movement 1). The odd accidental has a red freehand circle around it. 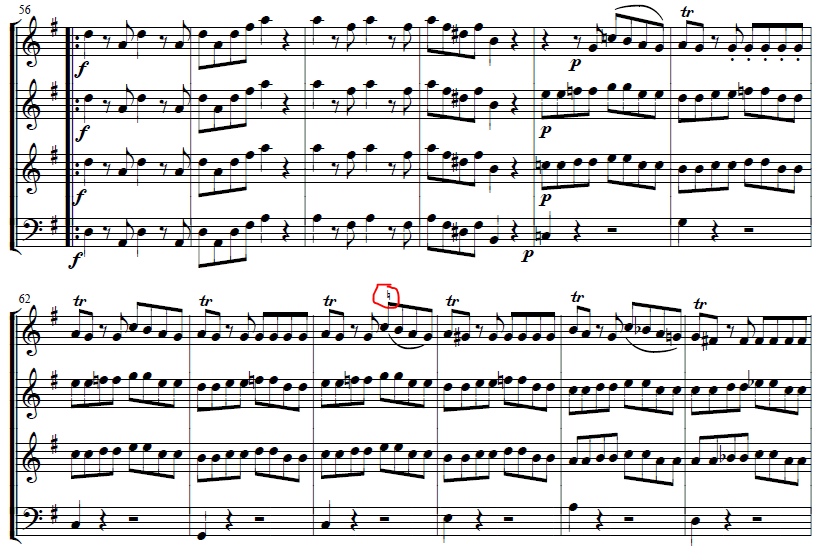 What does this natural sign mean? As you can see, the key is G Major and the C is left natural in G Major. There is no C sharp in the previous measures anywhere near (the last was in measure 54, in the previous section), so I doubt it's a grace note. This is also found in the fourth movement, measures 86.

Again, here, there are no accidentals on B's or C's for quite a few measures. Any ideas what these accidentals could mean?

Don't want to spoil the fun, but this could be some sort of error (not saying it is, but it could be). This arrangement was dated May 2008 and I just found a revised version (Feb 2012) by the same guy. It drops the accidentals in both spots and corrects the measure numbers (in case you didn't notice they are off). This doesn't necessarily mean that it was a mistake, but it is a possibility. Either way, if you can make sense of it, go ahead and answer the original question. I just wanted to let you know that the problem is not necessarily you, but it could be the score. If the natural signs do make sense to you, go ahead and answer the question. :)

Generally accidentals above notes refer to accidentals that are missing in the original but were likely mistakes in the original or were not notated originally but are necessary in modern scores (for instance, in a piece with no key signature, a low F# might be followed by an F# in a higher octave. In the 18th c. the higher F# would not need a sharp sign, but it would today). Such accidentals ("musica ficta": http://www.ccarh.org/publications/reprints/ieee/TYPE54.HTM for instance) are common in Medieval and Renaissance music where many of the accidentals were not notated but were just expected to be sung. Think of the 7th scale degree in minor leading to a cadence on the tonic; you generally know that it will be raised. In the Renaissance it didn't need to be explicitly marked. Modern editions put these notes above the staff so that performers can distinguish between notes in the original and notes in the edition.

That's the general answer since, after the edit, you said the editor later removed them. They don't seem to make sense here, and there are other errors besides these notes: the 2nd and 3rd staves are an octave too high at least from the "p" onwards and the 1st part is an octave too low. The measure numbers are right though: this passage begins at m. 56 in the score. In the 4th movement, the accidentals almost make sense since they were preceded by a B-flat and C# the last times a B and C appeared. In my score though the naturals appear in the normal place, but they are, strictly speaking, unnecessary.

It's a misprint or scribal error. You're starting on bar 56, then in bar 60 the C is made natural which implies that sometime before it was sharped. The error could even be the absence of a sharp on the C in bar 62.

Probably a typo. Naturals in front of a note could be there for all the reasons mentioned by previous commenters. Naturals above a note refer to ornaments (turns, trills) and mean "when you play this ornament, put a natural on the upper note." These notes have no ornaments so the mark doesn't make sense.

Not the answer you're looking for? Browse other questions tagged notation sheet-music accidentals or ask your own question.

44
What does a small x-like symbol before a note mean?
11
Small note above a normal-sized note
7
Double- to single-sharp notation in lilypond - how to get rid of natural symbol?
12
What are the small ">" signs above the notes?
6
What exactly indicates natural after double sharp/flat?
4
Diminished 7th notation, match the key or key signature?
3
(beginner question) If the first E is natural, is the 2nd E also a natural? (Or put another way, are the E's in the same or different bars?)