Is there a name for the progression ♭VI–♭VII–I?

The so-called Andalusian cadence occurs when one harmonizes the descending tetrachord from tonic down to dominant with I–♭VII–♭VI–V.

Yet the progression ♭VI–♭VII–I seems just as common. It's especially common right after a V chord, because V moves to ♭VI deceptively and then moves by step up to tonic. This ends up creating the exact retrograde of the Andalusian cadence: V–♭VI–♭VII–I.

Is there a name for this latter progression?

I've commonly heard this called the "Super Mario Brothers" progression, named for its nearly infamous use in the original Super Mario Brothers game when a level was beaten. That seems nonstandard, but it's the only name I've ever heard for it, and any musician who hears that name knows exactly what chords to play. If you need something to call this progression, this is the standard choice, as ridiculous as that sounds. This isn't the only time I've heard this used; I believe it's very widespread, and thus essentially almost a name. 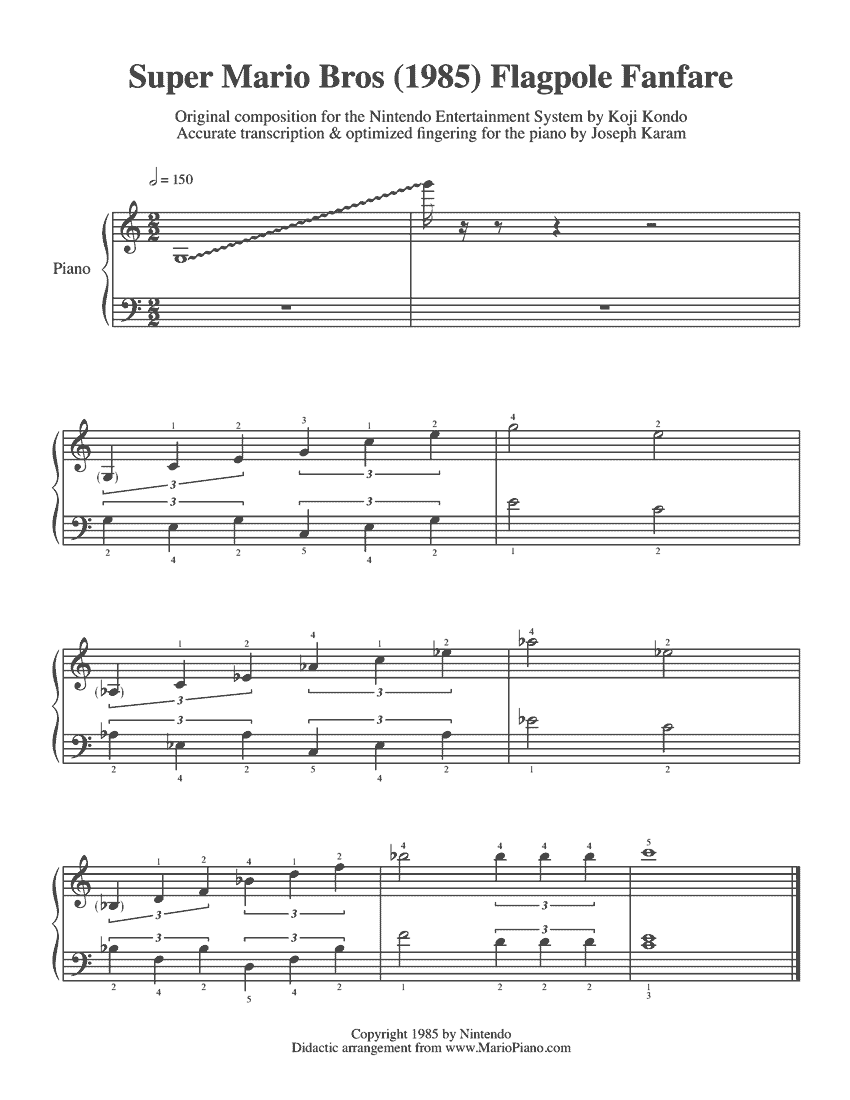 That piece of music has also been repeatedly quoted and paraphrased throughout the entire Mario franchise. Of course, the progression itself has been used in plenty of other contexts, and it sounds quite nice.

EDIT: I'm not making this up, I now have a source!

The Continuum Encyclopedia of Popular Music of the World calls it an Aeolian cadence, and I was able to find some matching usage online, but I'm not convinced it's any more widely-used a term than "Mario cadence". Also, unfortunately, the phrase is ambiguous in many circles -- it was used in a poorly-written analysis of The Beatles' Not A Second Time (which contains no such ♭VI-♭VII-I cadence), and alternate definitions attempting to make sense of this analysis dominate the first page of Google results for the phrase.

Your first commenter might be onto something with "retrograde Andalusian cadence", though it's a little bit of a mouthful. The phrase is immediately clear thanks to the direct reference to a much more well-known chord progression, and although it is less precise than Mario/Aeolian, sometimes that imprecision is what you want (e.g., when discussing both the minor tonic and major tonic variations).

Not the answer you're looking for? Browse other questions tagged theory chord-progressions terminology or ask your own question.

2
Is there a name for this cadence? (bVI bVII I)
11
How would you describe F G A chord progression?
6
Harmonic succession in the chromatic-minor system
3
Is this an imperfect authentic cadence in a minor key?
2
Does VI-VII prepare i in D natural minor?

8
"Andalusian cadences": How are they commonly heard?
13
How do you write successive, non-functional chord progressions?
10
Why aren't unusual leading tone cadences more common?
7
What is the most efficient way to memorize chord changes?
1
Why does this harmony work?
7
Other than scale-degree 7, do other scale degrees have names for their altered forms?
3
chorus construction in pop and rock
3
What is the functional role of the subtonic chord?
2
How is D7 functioning here? Applied chord both kind of does and doesn't fit