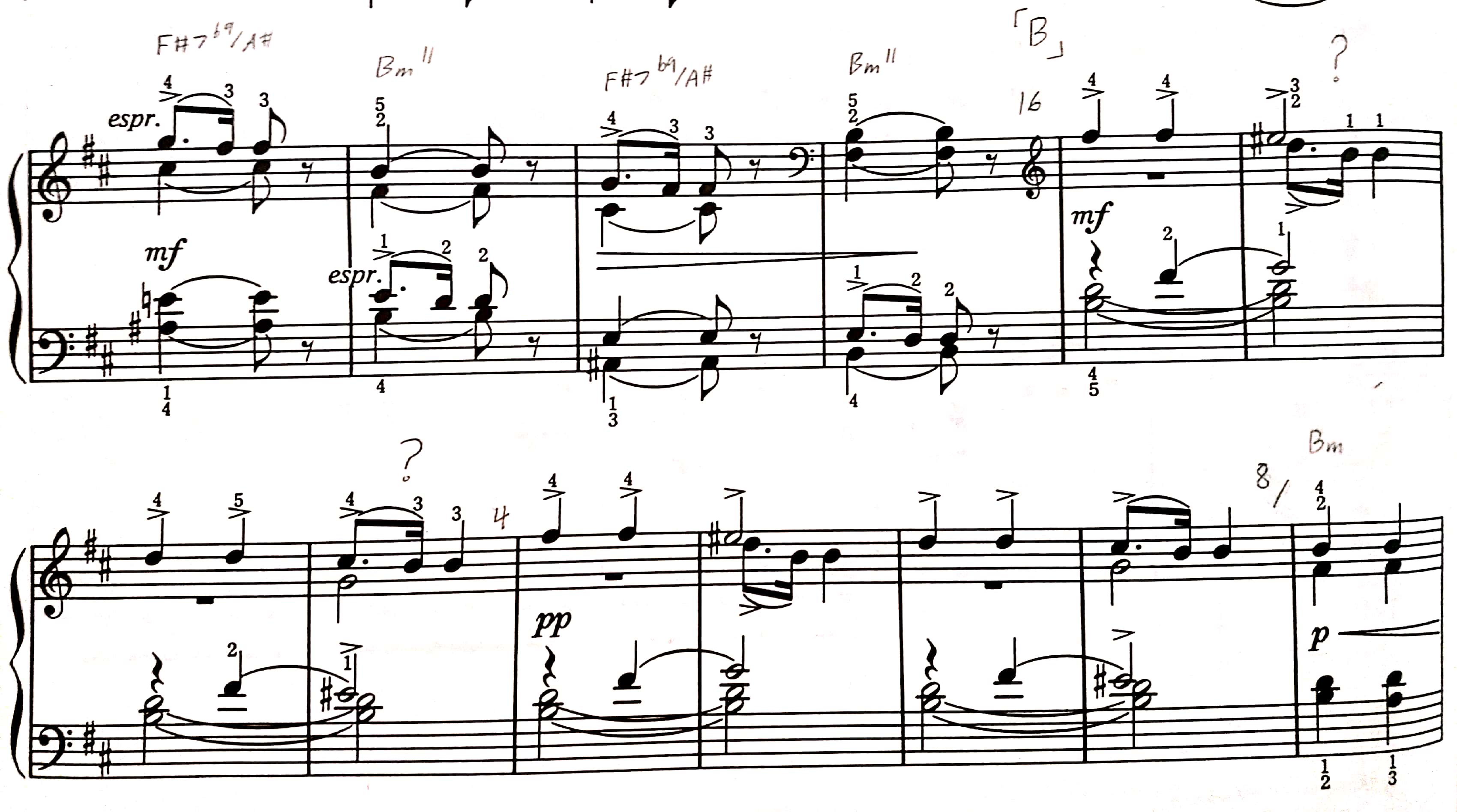 I don't know what chord it is.

The same chord also appears on the 4th measure with a different inversion.

What is this chord?

The E♯ is really a lower neighbor tone to the prior F♯. (Since it doesn't move back up to the F♯, we can call it an "incomplete" neighbor tone.)

Simultaneously, the F♯ in the left hand moves up by half step to G, creating a German augmented-sixth sonority on the downbeat of this measure.

But it doesn't resolve or function like an augmented sixth; instead, it comes from tonic and resolves straight back to tonic. As such, this harmony is just expanding tonic.

I think we can view this chord in one of two ways:

The same thing then happens two measures later: the F♯s split into an E♯ and G to prolong tonic, there's just also a C♯ accented passing tone on the downbeat.

Apart from this chord, I just want you to be on the lookout for non-chord tones. I notice in your second measure that you've labeled the chord as "Bm11." This is in some sense true, since the E is the fourth above B, and therefore an 11th. But that E is really a 4–3 suspension held over from the prior measure; the chord is more properly understood as just a regular B-minor triad. So just be sure to account for non-chord tones in your harmonic analyses!

It looks like an inversion of the augmented fifth/sixth chord

There are three main types of augmented sixth chords, commonly known as the Italian sixth, the French sixth, and the German sixth.

it is derived from vi7:

resolving in this case here into the tonic b-minor

The Italian sixth is enharmonically equivalent to an incomplete dominant seventh. The French sixth (Fr+6 or Fr4 3) is similar to the Italian, but with an additional tone, scale degree 2. The notes of the French sixth chord are all contained within the same whole tone scale, lending a sonority common to French music in the 19th century (especially associated with Impressionist music)

Firstly, the chord that appears in the 4th measure is not the same chord. It has C# instead of E#.

This is for sure a G7, the notes are there. The only detail is that he chose to notate the F as E#. If there was an F instead, it would be perfectly clear too.

It looks like at this part he uses the Hungarian minor scale, which has a #4 (E# here). Or whatever scale he is using, he wants the first five notes to be B C# D E# F#, and not B C# D F F#, which is inaccurate and confusing for a scale...

Anyway, the chord never stopped being a G7 :)