For example start with a C major scale and lets track the position of the C note in ascending keys ... C G D A E B etc.

This means that the 4 must be on the other end ...

(And this pattern follows if we had descended.)

(In this manner one might say key signatures 'start' on F, the 4, the beginning of the grouping, and not C.)

Regardless, the question is, does the 4-1-5-2-6-3-7 also denote the dissonance of the scale tones relative to the I?

It's difficult talking about the circle of fifths without a cirlce so I made one... 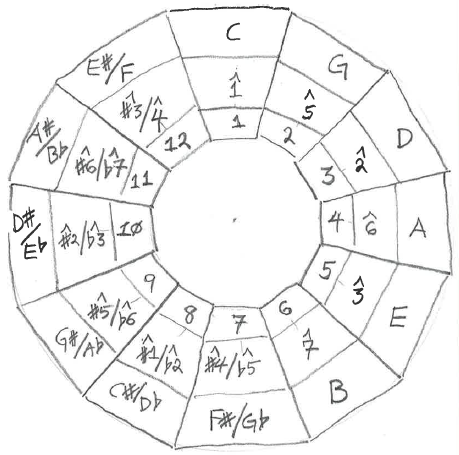 Coincidentally, I was thinking about one of the concepts in this question only a few days ago: if you want to generate the major scale from the circle of fifths, you need to go back one step on the circle from a starting position tonic to get the ^4 scale degree.

Of course you can also say that if you just go up seven steps from a starting tonic position you will end on a #^4 and have the Lydian mode. (Look into The Lydian Chromatic Concept of Tonal Organization by George Russell. Apparently he thought this particular rooting of a segment of the circle of fifths was the way to organize tonal music.)

You can take this idea further and step back further on the circle to get all the modes. This is the chart I made for myself to illustrate the idea... 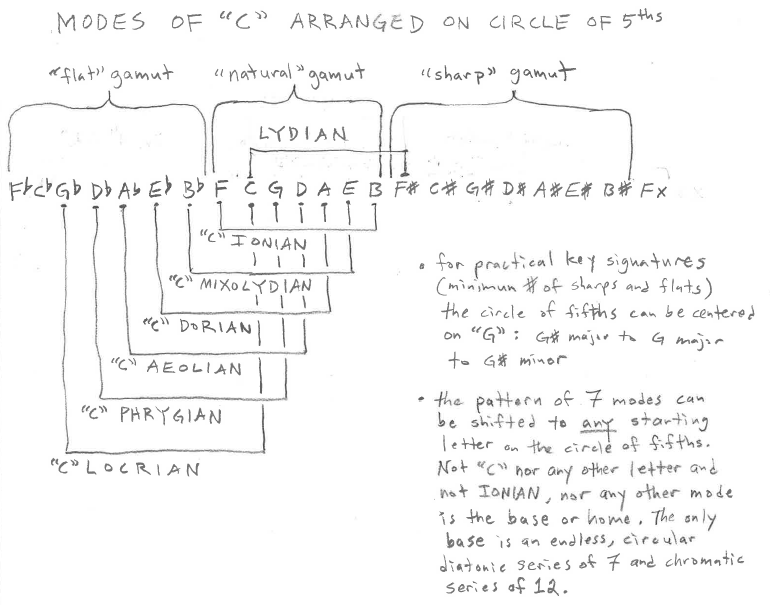 The conclusion I came to was any series of seven adjacent steps on the circle will produce a diatonic tone set and you can then select any one of those tones to be a tonic to create any of the seven modes. Therefore, to select any one particular scale from the circle is totally arbitrary. You can't use the circle of fifths to claim the major scale is the center, nor the Lydian mode, nor any other.

That's a long way to get to the first point which is scale degree sequences like this...

...when applied to the circle of fifths are arbitrary. You can make C any scale degree you want. I can simply say C isn't ^1 but instead it's #^4... of Gb Lydian.

Putting scales degrees arbitrarily on the circle of fifth seem to just obscure the real question.

Even if we say for the sake of argument that the circle of fifths position does determine dissonance of a scale degree, F and G are the same distance from C how could one be more or less dissonant based on circle position? They would be equal.

This question seems to be one of a series that tries to find the inherent dissonance of individual things. (At least that's how I've been reading between the lines.) B supposedly would be very dissonant and that kind of matches up with the leading tone being a tendency tone. But then E should be the next most dissonance. However, E is the mediant, a stable scale degree. This idea seems to conflate scale degree characteristics, tendency tone behavior, and dissonance.

Along similar thinking, if we compared the perfect fifth C G and A E the first is closer to the tonic than the other. Does that mean the first perfect fifth is more consonant than the second perfect fifth. That doesn't seem to make much sense to me.

This search for inherent dissonance kind of reminds me of Charles Rosen's ideas about structural dissonance in that both go beyond viewing dissonance/consonance as a quality of intervals. But grand ideas like that seem to require a sophisticated theory. Rosen qualifies the meaning. It's not simply dissonance it's structural dissonance. It's clear that he meant to create a new concept... and he wrote a lot to explain it.

Associating a scale degree to a series position and then calling it simply 'dissonant' strikes me as a very incomplete concept.

so will find no correlation with the circle of fifths.

(but you'll find other interesting relations and patterns if you search for the augmented triades or the diminished tetrades!) 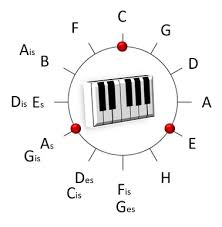 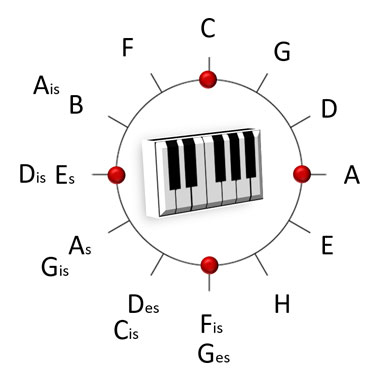 -4
Is the circle of fifths also listing the relative dissonance/consonance of notes of a major scale?
10
What is the list of intervals in order of dissonance

10
How was the ordering of Allen Forte's list of prime forms determined?
39
Why is music theory built so tightly around the C Major scale?
17
Are there any rules of thumb for shifting the key signature within a tone net?
3
Is there a name for this phenomenon in the circle of fifths?
4
Chord construction using the minor scale
6
Are any keyboard methods or music theory concepts based on keyboard mirror symmetry?
0
I want to create chords from solely interval structure as opposed to building upon triads?
4
Stressing the third beat more than the first in 4/4: is it syncopation?