Suppose I have four of eighth notes(4/4 as time signature), all of them at different pitches, one being very high. An example is show below: 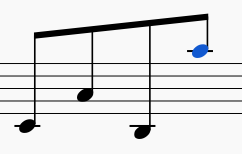 How would I know if I need to turn that upside down(downward stem) or not? Is there a method that applies to sixteenth notes, thirty-second notes, etc.?

When in doubt, use downward-pointing stems. As always, use your best judgement when something doesn't look quite right to you or if the context suggests one choice over another.

The general stemming rule (for individual notes) is: from third space upward, use downward pointing stems; from the second space downward, use upward pointing stems. On the third line, one can go either way. However, one may wish to violate the rules a bit to make stemming match a melodic contour.

Multiple notes on the same stem follow the majority of the chord notes; in this case, the third line goes down.

In all cases, readability is paramount.

Unless one is using stem direction to indicate voices, the most important "rule" is to use judgment in determining whether other rules "work" in a particular case, and overriding them when they don't. Most rules take a fairly narrow view of each individual problem, but in many cases other considerations may be more important.

For example, if there are many groups of beamed notes in succession, readability may be improved if the beams can be made to follow a reasonable contour, keeping beam directions consistent when practical. If the above message appeared between a bunch of beamed groups of low notes, and a bunch of beamed groups of high notes, it might make sense to have the preceding groups be beamed above the notes, the following groups be beamed below the notes, and the one group shown above slope down and to the right "between" the notes.

What's important is not to look at each beamed group independently, but to figure out an overall layout that visually makes sense. Oftentimes, there will be some beamed groups that could beamed reasonably well in several different ways if viewed only in isolation, but some of those ways would fit better than others in the context of surrounding groups.

Note also that an editor who is working as a member of a publisher's staff may need to adapt a more "mechanical" approach than someone who is working independently. If a publisher might end up having different parts of a piece laid out by different people, having those parts appear consistent may be more important than having them be maximally readable. If one is working independently, however, then trying to figure out what layout would be more readable would be more valuable.

29
Is there a Relative Pitch Clef?
7
Can a note be heard in wrong pitch?
4
How do time signatures relay information on the grouping of beats?
9
Upside-down down bow
8
When you look at (piano) sheet music, how do you "think about" which notes are being referred to?
1
Harmonic series role in a just intonation interval ranking?
8
Why does this edition use an upside-down up-bow to indicate down-bow?
3
What is the optimal (and computationally simplest) way to calculate the “largest common duration”?
1
Doubling notes in orchestration - inversions and extensions
18
What is this upside down square fermata?