The effects of memory on the perception of harmonic function

The opening four bars of Beethoven's fifth symphony are performed in pure octaves, with no other notes to color our perception of what we hear: 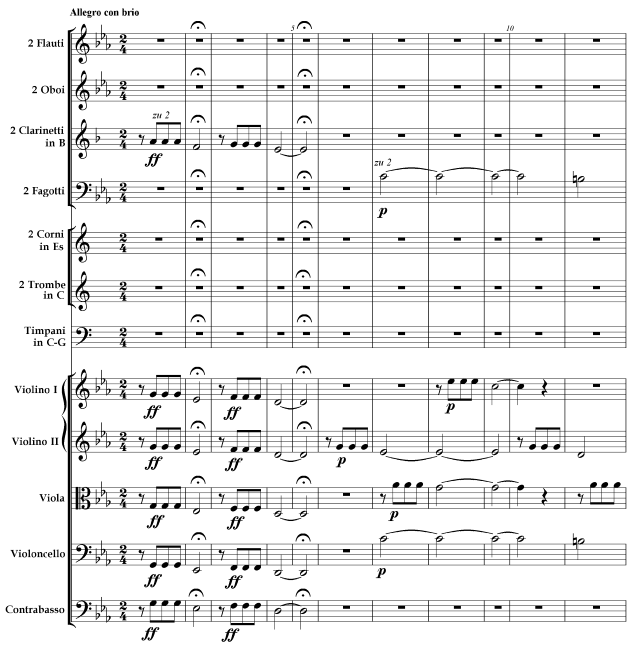 Taken alone with no other context, they appear to be more suggestive of E♭ Major than C minor, but I don't remember ever having heard it in the major mode, and can hardly imagine doing so. The repeated G almost instantly becomes a third instead of a 5th as soon as the universally familiar Bum-Bum-Bum-Baaaaaa sounds.

But why is this so? Is this purely a matter of memory? We know Beethoven's 5th! We hear it all the time. Is it, then, that we hear it as C minor before there is actually enough information present to establish the tonic? Or is there more in the first four measures to suggest C minor than I am seeing?

Similarly, in the ineradicable West Side Story's Maria, there is a measure with a perfect fifth that resolves to a tritone. What's this, you ask? Ah, but you can hear it, even though this flies in the face of what we typically think of standard consonance and dissonance.

I cannot, for copyright reasons, link to the real score, but for our purposes, this should be sufficient. The downbeat of measure 25 is the moment in question. ("Ma-RI-A! Say it loud and there's music playing.")

The notes there are accurate enough to demonstrate what I am talking about, though the midi playback (ugh!) skimps on that downbeat in a manner that no live performer ever would, so the aural effect is poor. Listening to the movie performance will do you better. You can start from 0:50, though the funny moment occurs at 0:58.1

So, the downbeat, the half-step descent from said downbeat, the short duration of the note, and the natural emphasis of the word "ma-RI-a" all serve to help us hear the downbeat as the emphasized dissonance followed by the "consonant" tritone.

But it seems to me again that what's really going on here may be the interference of memory: at every other "ma-RI-a" in the song, including the famous opening one, the "RI" is a more straightforward dissonance, and the following "-a" is its resolution. In this moment, we have maintained the same metrical pattern, the same rhythm, and the same emphasis. Only the intervals themselves have been reversed.

So, is this, again, a matter of tonal memory overriding our more typical harmonic understanding? Or is there something more going on that I am not seeing?

(Note: There may well be a few people out there who know the song well, and will say that they don't hear the dissonance-consonance pattern that I am suggesting. That's fine and well, but I have spoken to enough other musicians about this by this point in my life that I know I'm not even remotely alone in what I perceive here. If you don't hear it as I do, I do wonder what you hear instead!)

1 - It would be quite interesting to hear from folks who have never heard the song before whatsoever. None of the past instances of "ma-RI-a" are in that tiny clip from 0:50 to 1:00, so if those people do not hear the dissonance-consonance pattern that I'm suggesting, that would be evidence that memory is, indeed, playing a role in this!

"How wonderful a sound can be". That's what you're talking about? Am, Em, Bm. Where's the resolution on a tritone?

What IS interesting in the WSS score are the final bars. The 'Maria' motiv, settling on a C chord, with F# in the bass. An ending, but hardly a resolution!

As for the Beethoven, no there's nothing intrinsically Cm rather than Eb major in the opening bars. And yes, we have been told so often that it's 'Fate knocking at the door' that any other reading is probably impossible.

When did you first realise it was NOT a triplet? Having seen the notation (and maybe addressed the issues in conducting it) can you still hear it as a triplet?

Sure, probably some people have heard the first five bars in Eb major. But at bar eight, the bassoons playing a c' establish C minor, and after you've heard this once, you probably automatically hear the piece in C minor from the beginning. And there are those other factors Laurence mentions also. My rough estimate is that the number of "Eb major" feelings is outnumbered, on the average within the populace, by the "C minor" feelings by a factor of at least a hundred.

This psychological phenomen is not only in music but in all kind of perception and thinking that our perception is influenced by our experience. One of my teachers said once in the sixties: What a 70 years old calls his "experience" is the sum of his prejugees he was clinging to inspite of all the experience he could have made."

So we know that not only children but everybody is not drawing what we see but we are drawing what we know. And we are not hearing what there is, we are hearing what we have listened to and what is well known in our memory. This is the origin of our prejugees, racism and everything we believe to know!

So it sometimes can be pretty hard to change our thinking and our perception as our "cognitions" and our knowledge are already made. (The more I know, the more I know that I don't know anything!)

Interesting in this context is also the cognitive dissonance theory.

The Beethoven eventually become clear as the music continues. That follows a very basic but important pattern in classical music: phrase endings are the point where tonality typically becomes clear.

About Maria, is this the tritone you mention, the B in the treble against the F in the bass?

I'm don't think that is a resolution. It looks more like A C in the treble are the chord tones and the G B and B D are non-chord tones, a sort of double changing tones figure.

Regarding harmony and memory: yes, there is a memory component with harmony. This simplest demonstration of it I think is broken chord figuration. While the tones of a chord are played individually the mind/memory put them together as a sustained chord. Another example is compound melody where a single line has the effect of sounding line two lines. Memory puts together past melodic events and plays with the actual sequence of tones. Things are sort of time-shifted to create the effect of two lines in simultaneous harmony in our memory.

I went back and played through this with the "resolves to a tritone" idea in mind.

The first time the motif plays...

...we get the tritone over the bass accented on the first beat moving up to a P5.

A normal view of this would be a C major triad with a dissonant F# resolved by moving up to the G.

Later the motif returns, but it is transposed up to F and the melodic figure is reversed... 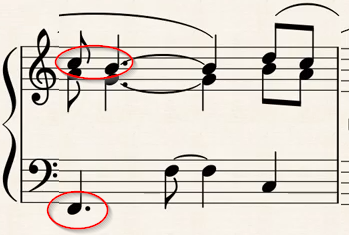 ...now the P5 is over the bass accented on the first beat moving down to an A4, tritone.

The harmonic interpretation of this second occurrence is the issue.

I think the normal view would be an F major triad and melodic movement starting on chord tones A C moving to dissonant, non-chord tones (variously G B D) then back to chord tones. That movement undulates through two measures before resolving to an E minor chord in the next bar.

Another interpretation posed in the OP is that the B over the F bass is a resolution to a tritone...

...resolves to a tritone...this flies in the face of what we typically think of standard consonance and dissonance.

It wasn't explicitly stated, but I take the meaning as the tritone is a consonance in this occurrance. The question is, why?

When the tritone motif is stated twice with the A4 metrical position reversed it could be perceived as both treatments are equivalent in terms of consonance. In other words: _the A4 tritone can be place on the beat or off the beat, because it is being treated as equally consonant as the P5. So F# and G over bass C transposed up and melodically reversed as C and B over bass F treats all the melodic tones as equally consonant. In terms of memory you might say both intervals are sort of superimposed mentally as interchangeable and equivalent as consonances.

Personally I don't hear it that way, but this seem like a plausible explanation for why the tritone in bar 25 sounds like a 'resolution to a tritone.' Also, I don't think either view is mutually exclusive. Harmonic ambiguity is a dynamic force in music. Such ambiguities invite multiple views.

Not the answer you're looking for? Browse other questions tagged harmony psychoacoustics or ask your own question.

8
Why does Beethoven's fifth symphony in c minor begin with a C major interval?

4
Does the bass always have to harmonise with the lead?
4
What do the terms "pitch relationships" and "vertical dimension" signify in relation to harmony?
4
Identifying a contrasting pair of musical memory trait
17
avoiding thirds at lower frequencies
1
harmony - singing F note on D major chord
19
"The intervals considered dissonant have changed since the 'Middle Ages'"; How so?
3
Why does VII have dominant function in natural minor
0
Am I right in that it is a diminished triad without the third?
3
Harmonic Series Interference
4
Does tempo affect use of non-harmony notes?