How do I play this ornament/slur? (Guitar Tab)

(As I have 2 questions about this specific tab and as they're both (probably) easy to answer, I figured I'd just ask them at the same time) 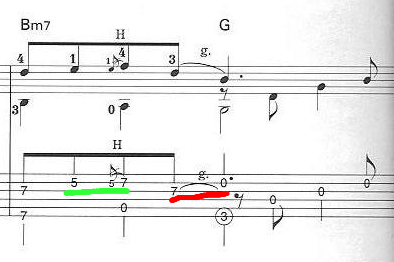 PS: If you're interested in the whole piece, it's 'Wind Song' from Kotaro Oshio, available here.

You're correct about the ornament in green: the 5th fret note (an E) just before the 7th fret note (an F#) is called a grace note, and it is to meant to be a very short note played in anticipation of the main note (the F#). How short is "very short"? That's up to you.

As for the indication in red: the 'g.' indicates a glissando, meaning a slide from the first note to the second one, with all the notes in between included. In this particular piece, what you should do is slide from the 7th fret on the G-string (a D) down the G-string to the 4th fret---but just as you get to that 4th fret, you'll do a few things simultaneously:

You could both let go of the G-string and play the open B-string in one movement by flicking your ring finger (the one sliding down the G-string) off the neck in such a way that it plucks the B-string on its way off the G-string. But that would also probably cause the G-string to ring out, so you'd have to mute it with a free finger---I'd use my left-hand index finger.

This all sounds very complicated, but it's really not so hard with a little practice. Best of luck!

As noted in the music, this looks like Bm7 played at the 7th fret, and then a slide and lift movement to G in the "open position."

In this way you can execute both ornaments without a lot of hand motion.

(There is an indication of an open A string there which complicates things a little, but may indicate a whole hand movement to Am7 rather than a hammer etc.: imagine you are sliding from Bm7 to Am7 to Bm7 but plucking slightly "out of phase" with the hand motion.)

Not the answer you're looking for? Browse other questions tagged guitar tablature fingerstyle-guitar or ask your own question.